Super7’s Masters of the Universe: Here’s What We Know 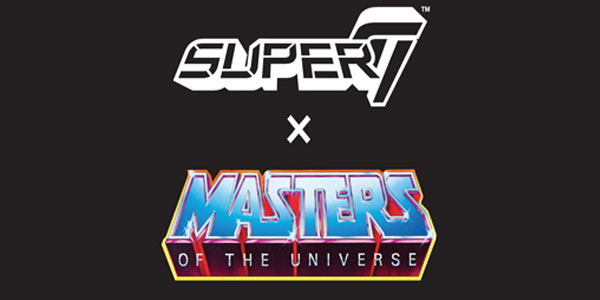 Your primer on everything we know post-MattyCollector.com…

Comic-Con kicked off with a legitimate bombshell for Masters of the Universe fans… starting in 2017, the property– formerly distributed in the 6″ scale MOTU Classics line via Matty Collector– will be taken over by Super7, purveyors of several 80s retro icon resurgences in the toy world, and creators of the short-lived ReAction craze.

News of the IP migration came quickly on Preview Night of Comic-Con, from both Mattel and Bryan Flynn of Super7, but we were able to parse out some specifics of the merger, beyond the vague announcements by both parties. Here’s what we know:

Masters of the Universe Classics WILL continue, as Super7 is now working directly with brand designers the Four Horsemen on new additions to the line.

In addition to MOTUC, Super7 just debuted a second wave of Masters of the Universe ReAction figures– and a new batch of MUSCLE style ‘MOTUSCLE’ figures at Comic-Con.

We’ve also received word that Super7 and Mattel are currently negotiating regarding the future of Thundercats, in whatever format the future holds for that property.

I’ve got a think piece brewing about all of this, but in the meantime, let me share all the official communications we’ve received thus far:

To Our Loyal Collectors,
Thank you for being the world’s most dedicated fans and passionate supporters of MattyCollector.com over the years.

We want to let you know that we have been working on something new and different for you that measures up to your loyalty and devotion.

As of December 31, 2016, we will be shutting down the website as we transition to Super7 to manufacture and deliver the Masters of the Universe and adult collector lines. Subscriptions and orders for 2016 will remain unaffected, and the site will continue to operate through the end of the year. For the past two years, Super7 has proven to be a great partner, and we look forward to seeing them continue to grow the Masters of the Universe line. They will unveil the expanded line for 2017 at San Diego Comic-Con.

To help you complete your collections before the end of the year, we’ll be opening the Vault beginning Thursday, July 21 at 9 a.m. PT. All 2014 and 2015 items, and select 2016 items, will be available for sale at that time. They’ll remain in the shop until the end of the year or while supplies last, whichever comes first. For our U.S.-based collectors, any Vault products you buy during San Diego Comic-Con will arrive with free domestic ground shipping.*

We thank you for your dedication and support through the years.

Speaking of SDCC 2016, our biggest announcement was that while all this was going on, we’ve been working secretly on the first new Masters of the Universe animation in the classic style since 1985 – “The Curse of the Three Terrors”! In trying to be as authentic to the original series as possible, this new animation features original voice actor Alan Oppenheimer reprising his signature role as Skeletor (as well as Mer-Man and Man At Arms) on a new adventure in Eternia. Additionally, we worked with The Power and Honor Foundation to use original backgrounds from the 1984-1985 series, so this new animation is as accurate as possible. We will premiere the “The Curse of the Three Terrors” at 10pm on Wednesday July 20th, at the corner of 8th Ave. and G in downtown San Diego, directly across the street from this year’s Skeletor’s Lair pop-up shop! Afterwards, “The Curse of the Three Terrors” will be available August 1st for download on iTunes and Google Play for $1.99.

As for new and exciting products, I wonder what other secrets we might have up our sleeves for all of you…?

And finally, here’s the official announcement from Super7:

80s mega-brand is a perfect fit for west coast vintage collectibles company to take over MattyCollector.com

SAN DIEGO, July 20, 2016 /PRNewswire/ –Leading into San Diego Comic-Con, Mattel today announced plans for an expanded partnership with Super7 noting they will be developing and distributing an all new range of Masters of the Universe® collectibles beginning in 2017. As a result of the expanded partnership, Mattel will be closing the current MOTU home MattyCollector.com at the end of 2016.

This week, the two companies will release an all new Masters of the Universe animated short – The Curse of the Three Terrors. This is the first time since 1985 that new MOTU footage has been created in the classic Filmation style. The film follows the original characters on an all new adventure in Eternia® and features voice actor Alan Oppenheimer, reprising his signature role as Skeletor®.

“It is a dream come true for us to be involved so intimately with the Masters of the Universe franchise,” said Brian Flynn of Super7. “We have jumped head first into the MOTU world, with retro 3.75″ figures, M.U.S.C.L.E. figures, the new animation and several other secret projects which we will be revealing soon. I think MOTU fans are going to have everything they could possibly dream of —and more!”

“He-Man, Skeletor and the inhabitants of Eternia could not be in better hands,” said Joe Lawandus, SVP of Mattel Marketing & Design. “Brian and team possess an encyclopedic knowledge of the franchise and an attention to detail that is off the charts. While closing MattyCollector.com was a difficult decision, we’re excited about the expanded partnership with Super7 and where will take the brand in the coming years.”

Check out all of the great MOTU collectibles in person at the Skeletor’s Lair pop-up shop in San Diego. For more information on location, limited edition product and the premiere of The Curse of the Three Terrors, visit Super7HQ.com.

What do you think? Is this change a good thing, or a bad thing? Let us know in the comments below!