New Guardians of the Galaxy App is Surprisingly Great 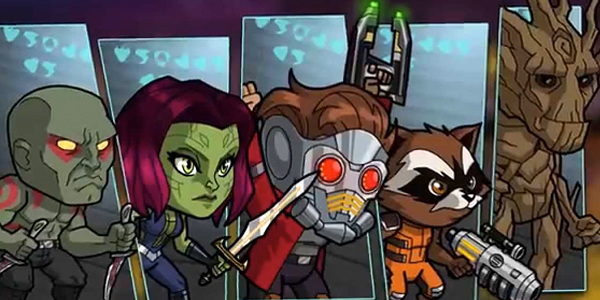 With the theatrical release of Guardians of the Galaxy right around the corner, it was only a matter of time before a licensed game hit the mobile phone/tablet market – what I could not have predicted is that it’s actually pretty awesome.

After an unfortunate run of Marvel-themed titles developed by Gameloft, my expectations for aGuardians tie-in couldn’t have been lower.  Fortunately, with Disney Interactive and Marvel Entertainment now directly at the helm, this app offers a streamlined and surprisingly challenging experience without all the nonsense that plagues a large percentage of mobile games.  I’m talking, of course, about in-app purchases, which this release is entirely devoid of.  You can slap down a meager $4.99 for a full game without having to worry about microtransactions to extend play time or the constant thought nagging at the back of your mind that you can just buy your way out of a tricky level.  In Guardians of the Galaxy: The Universal Weapon, players are treated over sixty levels of non-stop action backed by a well-implemented RPG-like system to manage upgrades, inventory, and unlockable skills. 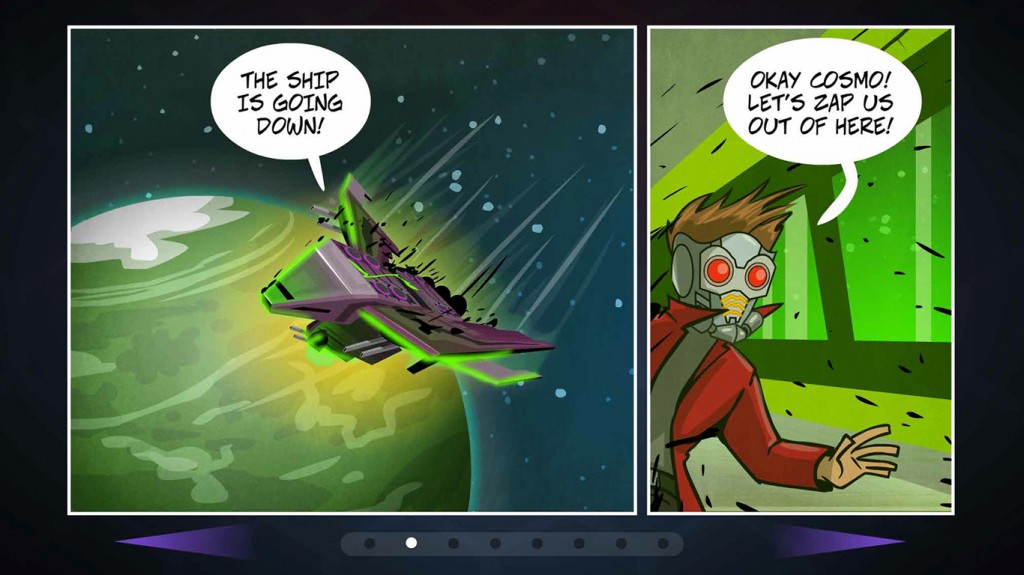 Much in the vein of Mika Mobile’s excellent Battleheart, GotG: TUW is a gesture-based, action-adventure title.  Players can assemble a team of four from a large number of unlockable characters, featuring both prominent figures from the source material and a few more obscure selections.  The likes of Charlie-27, Beta Ray Bill, Mantis, and many others join Star-Lord, Drax the Destroyer, Gamora, Groot, and Rocket in a no-nonsense original story told through comic-style panels between bouts.  Beginning with a prison break (and as to ease players into the gameplay), the first scenario introduces only Star-Lord as a playable character with the rest of the gang being unlocked upon completion of subsequent levels as they are busted out of jail.  With the initial group formed, it soon becomes apparent that a great evil is attempting to assemble a devastating weapon and, of course, the task of dismantling it falls on the Guardians. 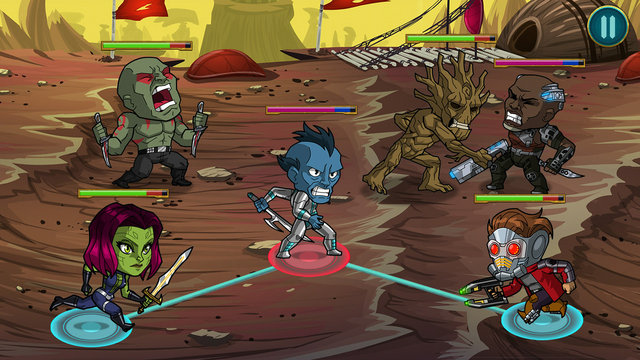 Each level plays out in a static environment, usually populated my harmful environmental obstacles like fiery vents and electrical nodes, in which wave after wave of enemies rush your position.  You can tap on any of your four fighters to select them and then drag a line to your intended target – either an enemy to initiate an attack or an ally to provide support.  They will continue attacking that target until ordered to do otherwise or until that target is no more.  Each character has unique abilities, their own list of stats, and access to their own signature weapons, all of which can be and will need to be upgraded.  Guardians is not an easy game by any means.  Once you get past the introductory scenario, the difficulty curve spikes dramatically, meaning that you will likely need to revisit prior areas to grind and gain XP to level up.  As you level up each character, their stats (health, strength, defense, etc) increase and they may gain access to new skills.  These skills include powerful offensive maneuvers, healing abilities, and even cooperative attacks that can be utilized if specific characters are part of your current team.  Team rosters can always be changed between missions and each character’s XP count is tracked.  Only surviving characters are granted the XP bonus and awarded loot at the end of each combat round. 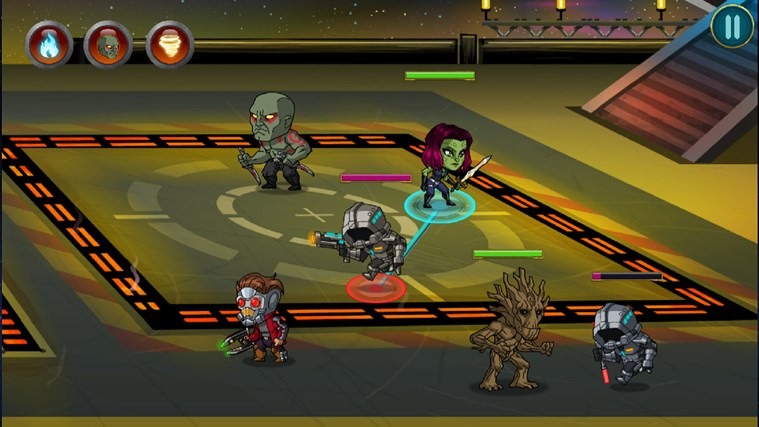 Loot includes ISO-8, which offers many different stat buffs to the character it’s given to, shards, which can be spent to unlock new characters, and coins, which can be used to craft items.  The only other way to amass wealth is in Arena Mode, which allows players to access an even larger pool of characters (including the villains you’ve defeated in story-mode) as they go up against some incredibly tough baddies.  This is the ideal option for when you’ve progressed well into the story and have already perfected all the earlier missions but still need to bulk up for the challenges ahead.  Thankfully, due to the charming art direction and funky soundtrack, grinding through the campaign is a joy.  The visuals are clean and the large-headed, squat character design keeps the mood light, even when you’re getting annihilated.  Additionally, the adorable celebratory dances your team indulges in, set to tunes like “Hooked on a Feeling”, certainly help make your victory something to look forward to. 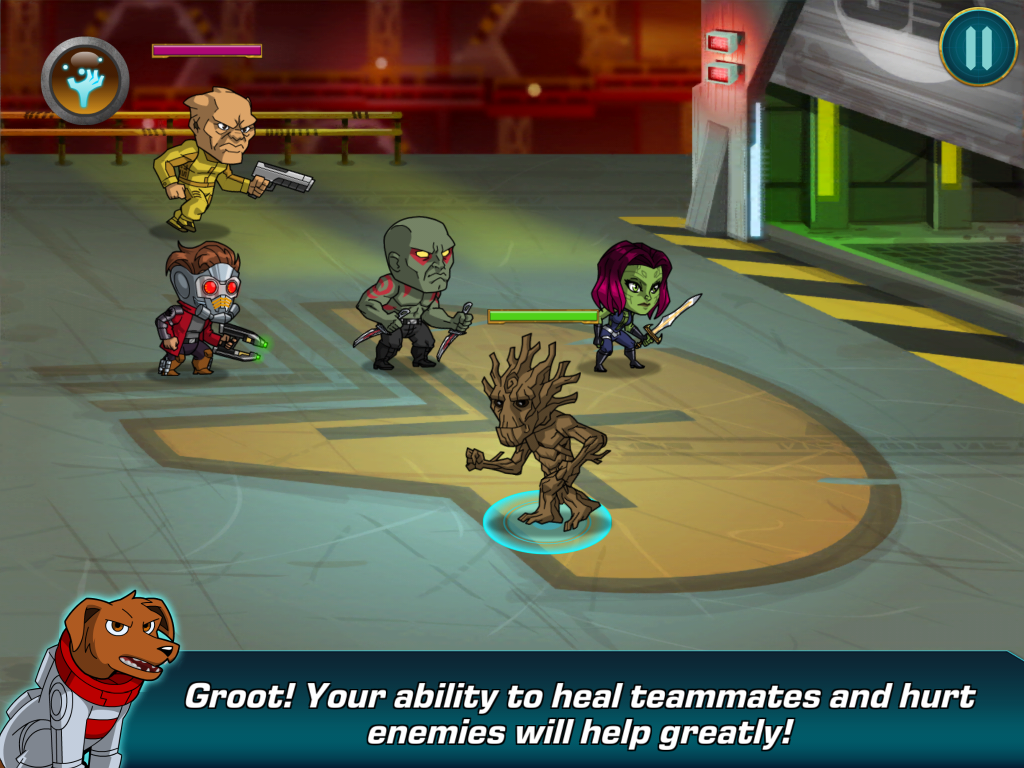 With current plans to deliver additional free content through monthly updates, the asking price of this already-robust app goes a long way, especially considering the premium priced, in-app-purchase heavy, mediocre titles like The Amazing Spider-Man or Captain America: The Winter Soldier that have complimented Marvel’s prior film releases.  Guardians of the Galaxy: The Universal Weapon is available now on iOS, Android, Windows Phone, and PC (although it’s an extra three bucks on PC).  Hopefully the film is half as fun to watch as the game is to play through.