Gotham 3.05- The Sirens Arrive And A Bromace Is Born 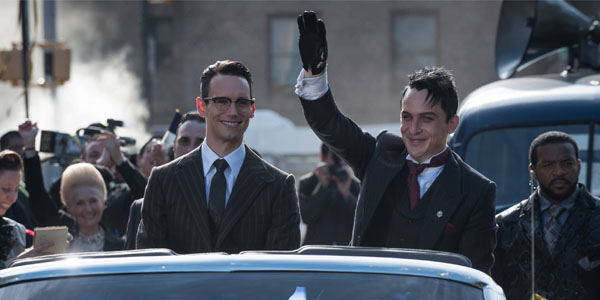 This week was all about the Penguin crew and their dysfunctional relationships, along with the birth of the Sirens

This week was all about Butch being pushed out of the Cobblepot administration, while Nigma rode the waves of disfunction. As Penguin does the good Mayor thing of kissing babies, cutting ribbon, and dedicating statues, the Red Hood Gang returned causing problems throughout the city. The gang now all sporting red hoods was secretly led by Butch. The plan cause chaos, and then take down the gang, making Butch once again the apple of Penguin’s eye. But Nigma, the king of puzzles, figures out the plan and sets Butch up, making him the villain instead of the hero to Penguin.

While Penguin is dealing with the Red Hoods, The GCPD has their own problems. They not only have to welcome back Nigma, who has fun moments with the whole team, but also a Captain who is starting to lose his mind. Barnes is being effected by Alice’s blood, starting to get stronger and showing some signs of obsession. Gordon also has his own issues, having some great moments with Bruce and Vale further showing his role in making the young crime fighter.

One of the best moments of the show was watching the birth of the Sirens. In the comics the Gotham Sirens are Harley Quinn, Catwoman, and Poison Ivy. I know I should have seen the clues, but tonight when Barbara announced Penguin at the club the light bulb clicked for me. Tabitha with her leather and whip is a perfect Catwoman, Barbara is just a perfect crazy Harley, and well Poison Ivy is now all grown up. I know the clues tonight were subtle, but I hope the trio work together and cause mayhem and fun stories in Gotham.

The episode ends with the Hatter torturing an “Alice” and slitting her throat. Clear his obsession for his sister will no doubt cause a blonde killing spree through Gotham that would put Dexter to shame.