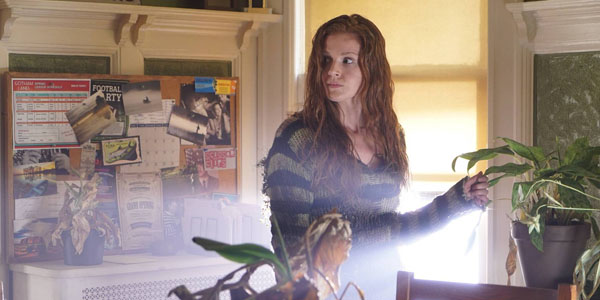 The plot of Deadpool is basically the motivation of Fish in the second episode of season three.

Fish’s Quest To A Cure- For most of the episode Fish is on the hunt to find Hugo Strange, and when she finds him she makes a plea that would make Deadpool proud. She wants a cure, but not to make her normal, but to stabilize her powers. After putting on a show for the cops and losing some of her monsters, she has Bullock kidnapped to help her find Strange. Using her powers did not seem to hurt her as much in this episode as it has in the past, making it seem less important to find that cure. The effects should have be multiplied to convey the severity of her deterioration, instead she seemed rather normal this week. After finding Strange Fish and her crew is surrounded by the police and an angry mob leg by Penguin. As much as Penguin wanted storm the doors and help the mob kill her, he made a deal with Gordon to get her out the back so he could have her all to himself. When it came time to put a bullet in her, he could not do it. She appealed to his softer side, explaining she was like his mother, a soft spot for Penguin, and he let her go.

The other major events in the show revealed the new “grown up” Ivy, the clone of Bruce, and Court of Owls. the Owls through pressure were able to shut Bruce down, making him just another normal teen. How long will that last, and what will reopen the road to Batman for the young Wayne. In the final moments of the show the Bruce clone also showed up at the Manor, begging the question what could two Bruce Waynes do in Gotham?

Ivy was also revealed to be all grown up and much more deadly. The meek little girl who hides form the people with her plants, is now one hot lady who is not afraid to hurt those who hurt plants. Finally Gordon is becoming more comic Bruce Wayne than in the past making it curious to see if it will be Bruce Wayne who becomes the Batman, or if it will be Gordon. I know it does not seem possible, but the deeper he goes into the shadows the more Comic Wayne he becomes, and it works. He is shut off from the world, tracking down criminals outside the law, and is making his way and deals with the crooks, building a small amount of trust with them to use them when needed. Seems very Batman to me.

Next week sees the introduction of the Mad Hatter, the inspiration for the name of the first half of this season, so expect his impact to last.