Gotham Is A Mad City 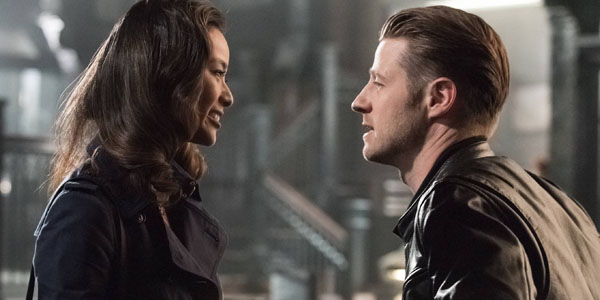 Gotham returned to Fox tonight, catching up on the status quo and introducing some new characters for season 3.

Gordon is Batman like, Fish is a full on comic book villain, and Bruce is becoming an adult in the season opener on Fox. Gotham is a much different city now six months after the evens of last year’s season finale.

Gordon has drastically changed from the cop we met in season one, becoming a person outside the law and hardened from losing Lee. He is much more Harvey and Batman now than he was was when he started. Part of the charm of the show is the change we see in all the characters, Gordon and Barbara the most. Both have taken extremely different paths, both much more fascinating than the characters introduced 3 years ago. In fact they are much more interesting in this season opener, both showing how well they have adapted to this Gotham. Gordon cleaning up the town in a proto-Batman role, while Barbara is turing into a great version of Harley Quinn. It is hard not to compare them to those comic book characters considering the world they inhabit. We also were introduced to Valerie Vale, a reporter who teams with Gordon to find Fish. She is the typical reporter and not a lot to say other than the chemistry between her and Gordon is reminiscent of Lois and Clark. It should be a fun relationship to see unfold, and hopefully not just a reason for Lee to and Gordon to fight when she does come back.

Gotham is now full of freaks, running around causing issues led by Fish. Now with powers, Fish is a full on super villain in both character and costume. She is leading a group of villains looking for drugs to stabilize their powers. There is a Croc like creature, Bat-like man who could be Man-bat, a speedster, and reverse fountain of youth who turns Ivy from a teen to an adult.  Selina is also in the mix as part of Fish’s crew, when it suits her.

Bruce and Alfred also return to enact a plan to take down the secret society that is controlling Wayne Enterprises and responsible for the murder of Thomas and Martha. Bruce calls out the mysterious group during a board meeting, and gets their attention by sending a thug to capture Bruce. Though their identity is unknown in the show, we know it is the Court of Owls and a Talon who kidnapped Bruce. In the comics they try to recruit Bruce, but he fights against them. This season will no doubt see Bruce try to destroy them, and take back control of Wayne Enterprises.

It was your typical season opener getting ready to take us on a ride to the birth of the Batman, and I think it might turn out to be Gordon before the season ends rather than Bruce.

What did you think of the opener?