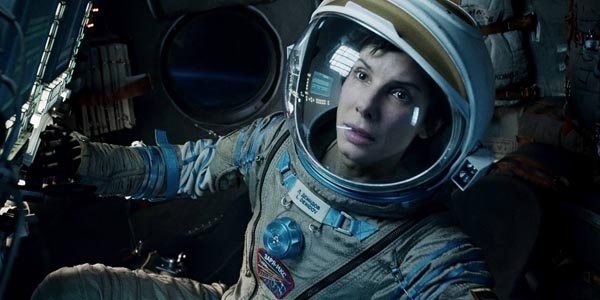 The new outer space thriller Gravity may not actually be a sci-fi film, but as an existential survival story, it shoulders up to the best ever.

Alfonso Cuaron already made one of the great modern science fiction films with 2006’s Children of Men, but his follow up feature, Gravity— despite its outer space trappings and beyond stunning visuals– is at its core a straightforward man vs. nature survival story… and a very, very effective one.

The set up is simple– Ryan Stone (Sandra Bullock) and Matt Kowalski (George Clooney) are part of a routine space expedition– Ryan’s first– which goes badly when their work station and ship are critically damaged by orbiting debris.  Set adrift in space, the novice Ryan has to find her way back to any sort of rescue from her current situation.  With their ticket back to Earth destroyed, Stone and Kowalski have to brave the enormous vacuum of space and its many dangers to find an impromptu way home on board a Russian space station… if they can make it.

Like any good survival tale, there is a constant escalation of bad to worse, as our astronauts face a litany of impossible perils.  The story is told entirely from Stone’s perspective, and Cuaron’s clean, confident storytelling makes it impossible not to experience the same terror and awe that Stone encounters in the face of the majestic expanses and overwhelming emptiness of space.  The thrills keep ramping up as each apparent means of salvation brings about only more impossible dangers, and there are a number of times I found myself asking “How can she possibly get out of this?”

Many of the best survival tales weave metaphorical themes into their white knuckle plotlines, and Gravity is no exception. Just like the ever increasing perils his astronauts face, Cuaron isn’t afraid to pile on a heavy layer of existentialism to his characters’ struggles.  It’s these small moments, as Stone shares with Kowalski her tragic history, and what brought her out here, that make her character’s desperate fight for survival really resonate.  It’s obvious Cuaron didn’t just think the concept of a survival movie in space would be “cool” (although, it is)… every facet of the void, the claustrophobic confines of the space stations and the bulky, realistic space suits worn by the characters have a deep and profound meaning to Stone as a character, someone seemingly permanently sealed off from the world, and her evolution into something new as she battles against all odds to make it home.

Cuaron made a wise choice to not set this film in the future, instead focusing his attention on technology that exists in NASA’s present day.  This offers a sense of realism to the urgency of Stone’s horrifying situation, which might be diluted in the face of deus ex machina machinery which could potentially save her.  More importantly, keeping the technology on display as practical as possible allows the richness and beauty of Cuaron’s orbital landscape to take center stage.  Gravity paints one of the most realistic and utterly gorgeous portraits of space ever captured on film.  The colors of the Earth and its atmosphere are a thrill to behold.  Even in these dire circumstances, it’s hard not to agree when Kowalski– a seasoned veteran astronaut– still marvels at the sunrise from this vantage point.  The sheer volume of this space is at once completely horrible and completely overwhelming and completely amazing, and it’s clear that Cuaron shares both the love and the fear of space that consume our astronauts.

Gravity is the most beautiful movie of the year, with a painstaking attention to realism and a haunting sense of scope in its amazing visuals.  This lush and awe-inspiring setting provides the perfect backdrop for this story of survival, of connection, and ultimately of redemption.  The constant escalation is mostly well-handled, although the chaos in which our survivors find themselves gets so extreme and so brutal at times, that I found myself predicting the inevitable conclusion by about the halfway mark.  But even this didn’t take away from the journey itself, or the wonderful arcs of these disconnected, isolated people discovering what it means to really be alive.