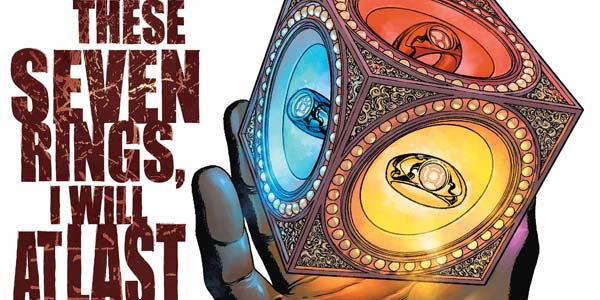 As we learned during Green Lantern: Lights Out arc, the universe’s ring-wielders broke through the Source Wall that surrounds the universe and stole secrets of immense cosmic power.  Highfather, the leader of the New Gods, knows what they did and is trying to finds those secrets for himself by using one ring of every color of the emotional spectrum in his quest to defeat Darkseid. I actually think the weapon Highfather forged looks like the Cosmic Cube and the Infinity Stones had a baby (haha). Of course, nothing is ever that simple and what follows will threaten to alter the very fabric of the universe as we know it. Godhead is a crossover event that finds Green Lantern and the New Gods entangled in a struggle for intergalactic survival.

I have had only 2 issues with Act 1. (SPOILERS IF YOU HAVE NOT READ IT YET.)   First off how easy the New Gods came in and gathered the 7 Rings needed to build the weapom and that was in Act 1 Part 1!!! I mean REALLY just gonna dive right in? Second issue with  Act 1 was in the behavoir of the New Gods in this New 52. I know they are gods and are powerful, but did they have to be written to be arrogant buttheads?

As far as keeping the continuty alive this story still has that in place, but I have a feeling Kyle Raynor is going to be making waves and will be the turning point of this book. Sinestro issue 6 wraps up Act 1 with a big bang (LITERALLY). Sinestro took his Sinestro Corps off of New Korugar to aid in the battle the Green and Indigo Lanterns were fighting against Bekka on the planet NOK.

Since the New 52 the Green Lanterns have had a few too many “crisis” events that have basically flatlined towards the end. Geoff Johns is missed IMMENSLY on these Green Lantern books in my honest opinion. I still enjoy the read and if you like the Corps then you will enjoy this book. We will see what Act 2 has in store for us in Green Lantern issue 36 due sometime this month.