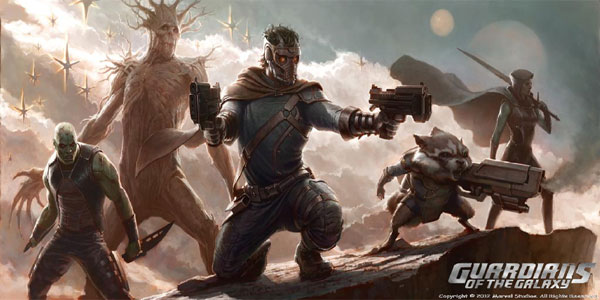 What do the Dark Knight, Dunder Mifflin and Old Spice have in common?

I don’t know if I can honestly say I’ve been as excited for a Marvel movie as I am for James Gunn’s Guardians of the Galaxy.  Yes, virtually all of Marvel Studios’ output has been fantastic, and as we approach the post-Avengers “Phase Two,” there’s lots to look forward to… but there’s something bigger, bolder and way ballsier about expanding this Marvel cinematic universe to a scale like this.

The Guardians of the Galaxy are as far from a household name, and their space-faring adventures are definitely not the typical blockbuster fare… especially through the filter of comic book movies.  It’s genius that Marvel built to this idea– Iron-Man started fairly well grounded, Thor got broader, and Avengers broader still, but GoTG will likely be BIG.

And having a talent like James Gunn behind the camera should help sell any gonzo paths they dare to blaze!  The guy behind the incredible (and incredibly underrated) Slither and Super seems like a wonderful fit for Marvel Studios, and his rumored casting calls have proven quite interesting.

The biggest rumors dropped earlier this week, with Joseph Gordon Levitt hinted to be considering dropping DC’s post-Nolan Batman/ Justice League to start in GoTG as the lead Guardian Peter Quill (AKA Starlord).  Gordon Levitt seems like a smart guy, and it’s fairly obvious Marvel will be on the winning end of this burgeoning franchise war (unless Man of Steel turns out to be something WAY better than what we’ve seen, which honestly is possible as we haven’t seen much).  So it wouldn’t surprise me to see JGL opt to helm a potential Marvel franchise over an iffy Justice League co-star spot.  And his tastes seem left of center enough that he’d likely have more fun with an offbeat, more customizable character like Starlord than the straightforward, Warner-protected Batman.

Other Starlord candidates are rumored to include Zachary Levi (Chuck), Michael Rosenbaum (Smallville), Jim Sturgess and most recently John Krasinski (Jim from The Office).  This is neat– I like all these guys, and they’re all totally different!  I think my vote for the ideal Starlord (based on my uneducated guess, knowing nothing about the on screen team) would actually be Krasinski, whose sardonic sense of humor would benefit Quill greatly.  Plus, Krasinski is the guy who lost out on the coveted Captain America role to Chris Evans, so it’d be cool to see him find a spot in the Marvel Universe after all.

And Starlord’s not the only character garnering rumors!  Three names have been mentioned for Drax the Destroyer, another teammate we’ll be seeing in the film– Isaiah Mustafa, Dave Bautista, and Brian Patrick Wade are supposedly all being courted.  Bautista is among the latest wrestler-turned-actors, recently starring in The RZA’s Man With the Iron Fists.  Wade is best known for Generation Kill, but the real intriguing one here is Mustafa… you may not recognize him by name, but he’s the Old Spice pitchman, which is totally awesome!

I’ve been digging the wild rumor mill behind this movie, and any of these actors seem like they’d be great, albeit very different, fits in Marvel’s cinematic world.  I’d be stoked to hear the rumors turn to casting news sooner than later, but I’d expect we’ll catch a list of actresses being eyeballed for Gamora first… and (with any luck) voice actor hints for Rocket Raccoon!