GUARDIANS OF THE GALAXY: The Coolest Marvel Movie Ever 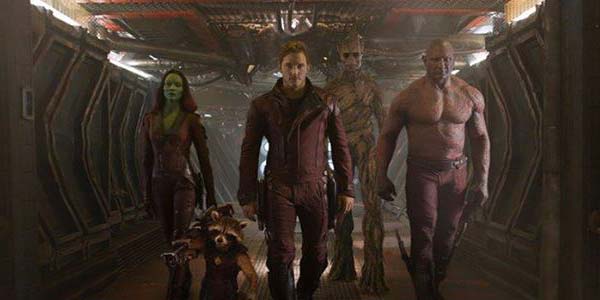 Marvel’s riskiest, most boundary-pushing movie yet pays off in a colossally entertaining way.

Guardians of the Galaxy is by no means your run-of-the-mill super hero movie.  If having an offbeat talent like James Gunn (Slither, Super) in the director seat wasn’t enough to clue you in to that– and the fact that the Guardians are by no means the household names that Iron-Man, Captain America and Thor are– there’s also the fact that these guys aren’t super (they’re for the most part average joes, of their respective alien races), nor are they heroes really.

I bring all this up because what it boils down to is, Guardians of the Galaxy is not a fit for the standard super hero origin story.  But rather than force it into a mold, Gunn makes the very wise choice to fully embrace the strange, weird and wonderful vibe of this story.  In doing so, he’s created not only the funniest and most entertaining movie yet from Marvel, but also the most genuinely cool movie of the summer.

I don’t want to delve into the plot of this space opera too much, but the set-up is simple enough– Peter Quill (Chris Pratt) was abducted from Earth as a kid and raised in outer space by an alien gang known as the Ravagers to become a master thief (the “master” part, especially in his own mind).  Quill gets himself busted on a job gone south, and winds up in prison where he meets some of the folks who botched his mission in the first place, including an assassin named Gamora (Zoe Saldana) and a pair of bounty hunters, Rocket (a genetically and cybernetically altered Raccoon, voiced by Bradley Cooper) and Groot (a sentient tree with some truly mysterious special abilities and the voice of Vin Diesel).

The whole gang lands in a prison run the Nova Corps, an intergalactic police squad, where they meet a revenge-minded maniac named Drax the Destoyer (David Bautista) and bust out to complete Quill’s transaction and score a huge paycheck off a strange artifact that packs some serious firepower.  With the Nova Corps and lots of dangerous creatures on their trail, this band of misfits has a mutual crisis of conscience and they decide to keep this weapon of mass destruction out of the wrong hands, even if it means giving up their big score.  But that’s just the beginning of their hardships, as an alien warlord named Thanos, and his minion Ronan the Accuser, have their sites set on using the mysterious orb to eradicate entire planets.

So in short, if you’ve read any of Marvel’s cosmic-skewing comic books and were worried the strangeness inherent in those pages would be whitewashed on the big screen, fear not.  We see Thanos, lording over his henchmen on his dead asteroid from his floating jet throne.  We see Knowhere, the floating head of a dead space god known as a Celestial (and even a live Celestial in a flashback).  We see Benicio Del Toro’s Collector, chewing on scenery while never resorting into serious camp.  And we see Michael Rooker’s blue-skinned Yondu and his gang of space pirates, tearing around the universe looking for a big score.

There’s a lot going on– a lot of characters, a lot of alien worlds, and a lot of plot– but everything comes together brilliantly under Gunn’s guidance.  One of the keys to sci fi and fantasy is setting them in a fully realized, lived in world, and Guardians of the Galaxy does that in spades.  These fantastical settings and bizarre creatures are shown just enough that we get to understand them, while no one stops the momentum of the movie to belabor us with a full explanation.  The plot moves forward and we keep our focus on the core characters, while every corner of the frame is populated by cool little details, nuances and side characters about whom I just wanted to know more and more.

The perfectly thought out world building is half of what makes Guardians work, but no matter how much our imagination is sparked by the perpetually fun settings and awesome creature designs, it wouldn’t carry the movie if we weren’t given characters to legitimately care about.  But the cast assembled in the movie, especially the Guardians themselves, is perfect.  Each of our would-be heroes gets their own unique action beats AND character moments– we never focus for too long on any one character, leaving what is probably the most egalitarian team movie ever.

All the Guardians are rough around the edges in their own way, but I love that their dynamic isn’t as simple as “misfits have to learn to get along to win.”  There’s some of that, but none of these characters flat out hate or love one another; they’re just working together… sometimes they click (the second interaction between Gamora and Peter is a quasi-romantic moment that would make Captain Kirk jealous)… and sometimes they piss each other off.  But the true genius of this cast is that they harness the same chemistry on screen that they clearly have behind the scenes.  The characters begin to genuinely work together and enjoy eachother’s company at the same time we, as viewers, are surrendering to the chemistry we’re watching on screen.

To make it even more impressive, two of our five heroes are fully CGI creations.  Rocket and Groot are incredible, and packed with as much humanity as their real-life co-stars.  I wasn’t sold when Bradley Cooper was announced as Rocket, but now I cannot imagine anyone else playing this guy.  He’s sarcastic, and he has a temper, but he’s also an incredibly skilled inventor and extremely proficient with guns as large as he is.

That’s what makes all these characters great. Quill himself sums it up in his rallying speech late in the movie– the Guardians are losers… by which, they have all lost something.  They are all damaged individuals, and they come to realize that they can support each other.  It’s not played for pathos (the movie’s way to fun for that kind of heavy emotional slog)… but none of them are ever played as buffoons, either.  Even when they get their team name, as the movie’s villain mocks them, this crew proves to be incredibly capable and far more powerful than anyone gives them credit for.

From the first trailer, Guardians of the Galaxy issued a mission statement that it would be a different kind of Marvel movie, and the film truly delivers on that promise, in truly great and character-driven ways.  Even the totally great 70s soul soundtrack, showcased very prominently in the trailers, turns out to be a strong piece of Peter’s arc as a character.  I fully expected Blue Swede’s “Hooked on a Feeling” to show up in the movie, adding to our overall “cool” hipster vibe, but what that yellow Walkman winds up meaning to Quill– and the payoff for this stylistic tic at the end of the film– is so much more thoughtful and emotionally satisfying than I had ever imagined.

There’s so much of that in this movie, small details that boldly establish this very different, incredibly unique new environment, and others which help inform us who these characters really are, without wasting time on definitions, self-descriptions or pathos.  For a movie as jam packed with, well, everything as Guardians, it’s a miracle that the story moves at such a confident, speedy clip, as we follow our team on their journey to save the universe, beat the bad guys, and find out what they’re all truly capable of.

Guardians of the Galaxy is funny, and fast paced and the cast is incredibly charming. But as great as each and every one of them is, the true star here is James Gunn, who was able to pull all these aspects into the duck press– an origin story, times five, a villain providing legitimate stakes both personal and large-scale, and a literal entire universe of worlds, creatures and characters heretofore unseen in Marvel’s movies– and make it work.  And not only does it work, Guardians is such an upbeat, fun and airy blast of movie entertainment, it’s not until after the credits role that you catch your breath and truly appreciate the hat trick Gunn pulled off.

I absolutely cannot wait to revisit the Guardians of the Galaxy, time and time again!