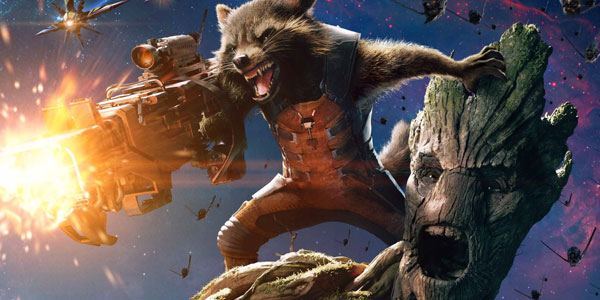 Our space opera heroes each take a turn in the spotlight.

Early August has seemed so far away for so long, it’s easy to forget it– and Marvel’s Guardians of the Galaxy– will actually be upon us in about six weeks.  And as a reminder of this fact, Marvel has released a new set of character one-sheets for the movie.  The four-part set features Star Lord and his blasters on one, Gamora on another, Drax’s back on a third and Rocket perched on Groot’s shoulder for number four.

I like them all, although I’ll admit they feel a little less generic than the charming, dimestore novel cover style of the previous one-sheet.  Despite Chris Pratt and a great character as source material from the comics, I think the Star Lord poster is pretty dull, since his pose is almost identical to that last poster.  Drax fills the movie’s quota of hokey back-to-the-camera shots, but at least his back is covered in interesting looking tattoos or scars or whatever.  Gamora’s poster is pretty solid, although something Zoe Saldana with green skin just seems off to me.

Rocket and Groot are the real winners, in my opinion– their poster looks cool as hell.  Guardians is a weird movie for a lot of reasons, but the fact that the two characters I’m most keen to see on the big screen are 100% CGI is one of the big ones for me.  Both Rocket and Groot look awesome, and strange, and I’m totally glad to see Marvel isn’t shying away from promoting them in the slightest.

Check out all four posters below… which one is your favorite? 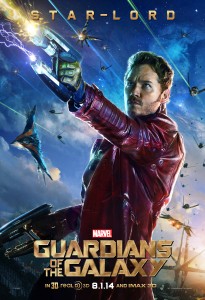 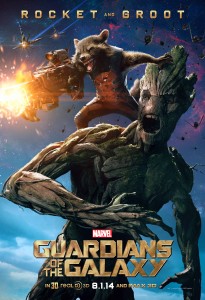 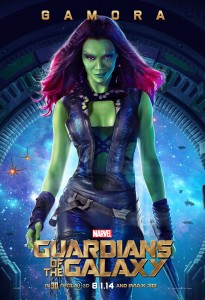 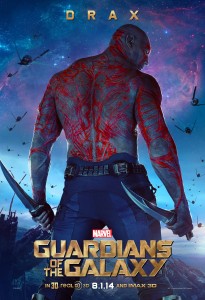