Guillermo Del Toro May Be Making A Vertigo Movie 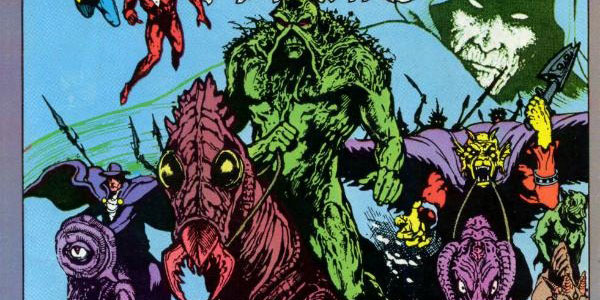 Rumor has it, Warner may be working with their beloved Pacific Rim director to make a supernatural team-up movie based DC’s Vertigo heroes.

There’s obviously a lot going on behind the scenes right now as Warner and DC try to formulate their plans to go toe-to-toe with Marvel’s incredibly impressive cinematic movement, and the latest rumor has Guillermo Del Toro helming a movie called Heaven Sent, which would basically be a team-up of most of the DC heroes who have migrated to the company’s Vertigo imprint, then back to DC proper as of the New 52 relaunch.

The movie would go deep, including everyone from Deadman, The Spectre and Swamp Thing to Constantine,  Phantom Stranger, Zatanna and Etrigan the Demon, and it’s pretty exciting news– these weird characters shared a very connected universe on the fringes of the DCU, and their various books always featured a lot of cross-pollenation. Many of these characters are currently quite interconnected in the New 52 universe, between Justice League Dark and Scott Snyder’s work on Swamp Thing.

I also think GDT is totally the right choice for this project– the bizarre, occult angle is squarely in the wheel house of the Hellboy/ Pan’s Labyrinth director, and I can see him working wonders with the dark and bizarre cast of supernatural heroes.  It’s a win for Warner either way, as Pacific Rim is already garnering enough buzz that the director has been tapped for a sequel almost a year before the movie hits theaters, and it’s clear Warner wants to keep the director busy in their studio as long as they can.

I’m very intrigued by this news, and t seems like a much better fit of property to director than other recent rumors, like the Ben Affleck-helmed Justice League. How connected Heaven Sent would be to the more mainstream DC films is a whole other question, but whether the movie will be its own beast entirely, or a facet of a larger DC film universe, I would love to see this happen, with Del Toro behind the controls.