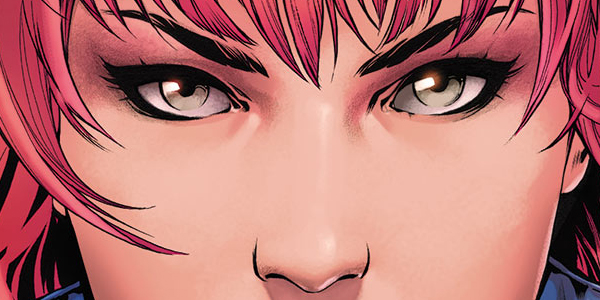 Valiant Entertainment wraps up 2012 with a bang, ringing in the holidays with the debut of a fan-favorite character in the pages of Harbinger and delivering one of the most action-packed issues of X-O Manowar yet (and that’s saying something). 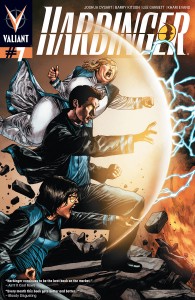 Harbinger #7 continues the “Renegades” story arc, which highlights a different character each month as Peter Stanchek and Faith Herbert seek out individuals with extraordinary latent powers to aid them in their resistance movement.  Last month’s book focused heavily on Kris Hathaway, Pete’s childhood crush who, while having no psionic powers of her own, proves to be a vital asset to the group.  Now, they seek out one Charlene Dupre, who long time fans may know best as the fiery bombshell Flamingo.

Similar to Kris’s story, readers spend a fair amount of time getting to know Charlene and what makes her tick.  Currently employed as a stripper, her life has seen its ups & downs and she makes her share or mistakes.  But these follies yield a more interesting, multi-layered character – not one to feel sorry for or pity, but rather an interesting spectacle of youthful exuberance and emotion to bare witness to.  Writer Josh Dysart continues to excel at creating diverse characters that are fascinating to read and who have amazing chemistry with each other.  The natural flow of dialogue and character interactions make you feel less like you’re reading a comic and more like you’re watching live actors.

Of course, the characters we’re all familiar with are still very much present here, including the lovable Faith, whose bubbly, optimistic personality is harshly contrasted by Kris’s bitter cynicism.  We also get a brief epilogue to Kris’s actions from the previous issue, where she arranges a chance meeting between Harada and the forces of Project Rising Spirit.  The result is pretty amazing.  All this is brought to brilliant life by three artists this time around.  Khari Evans returns to pencil a portion of the book, along with X-O’s Lee Garbett, and there’s some jaw-dropping work by Barry Kitson.  In short, pick up Harbinger #7 – it’s amazing. 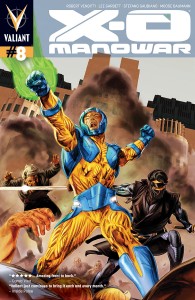 That brings us to X-O Manowar #8, where the action is at a fever pitch.  The issue opens with a flashback to Northern Italy in 402 AD, before Aric’s abduction, as he is scolded by King Alaric for his impetuous nature.  Alaric blames Aric’s impulsiveness in battle for their recent casualties and the subsequent infiltration of their camp.  But our hero fires back with one badass line after another, advising that he will always charge into battle, regardless of the odds, to destroy as many of his enemies as he can and earn a respectable death.  This segues to present day as Aric hovers effortlessly in front of the MI-6 Headquarters in London, where Vine operatives have infiltrated its highest ranks.  Preceding their cooperative assault on MI-6’s virtual army, Ninjak takes a call from Chief Patrick Clement (who had originally hired him to retrieve the X-O armor) and arrogantly toys with him, even hinting at his own deception.  By the time Clement realizes what’s going on, it’s too late and the assault is in full swing.  What follows is awesome.  Readers bear witness to an overwhelming amount of carnage as Aric and Ninjak explode on the scene and lay waste to scores of Vine agents.

Thanks to the outstanding artwork of Lee Garbett, Ninjak feels fittingly agile as he fluidly moves throughout the battlefield, while Aric is illustrated with with such depth and weight — on foot he trudges towards foes like a veritable bull in a china shop and, in the air, he seems to move with the force of a wrecking ball.  He’s extremely powerful and he knows it, reveling in the slaughter of his hapless enemies.  The lightning sword (an awesome weapon through and through) is used heavily in the battle and, for the second time in the series (the first instance was in issue #5), Aric straight-up crushes someone from above.  This may seem like a silly thing to point out but I can’t help but wear a huge smile every time I see it.

Post battle, we are also treated to a killer sequence involving the Vine sleeper agent, Alexander Dorian, who has turned his back on his kind in favor of seeing humanity thrive.  During their final “gathering,” a state of consciousness in which the Vine collective can converse with one another, the council shuns him but their plans don’t play out exactly as they’d hoped…  Without an open line of communication with the enemy, however, he and Aric are left in the dark, knowing only that the Vine are still heading to Earth to wage a full-scale invasion.  Thus far, writer Robert Venditti has done an incredible job with the series, perfectly reinventing one of the greatest characters in the history of comics for a new audience.  And with the upcoming Planet Death arc on the horizon, things are only set to get more intense from here.  Some serious shit is about to go down and I absolutely cannot wait to see what he has in store for us in the coming months.

If you haven’t been keeping up on these books, there’s no time like the present to catch up on some of the best stories out there — you’ll be glad you did.  Check out the some preview pages and cover artwork for Harbinger #7 and X-O Manowar #8 below.