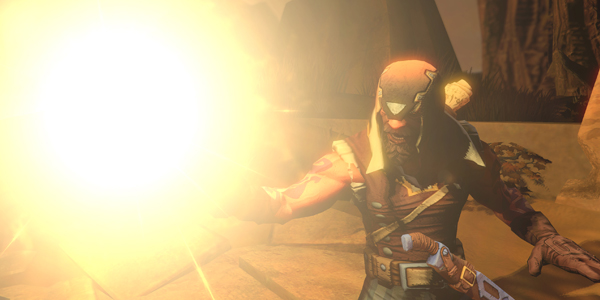 Developed and published by Defiant Development, Hand of Fate is a genre-bending title that exists at the crossroads of hack-and-slash adventure games and tabletop role-playing; incorporating deckbuilding elements with third-person action segments and a roguelike exploration system to create a unique, remarkably fun experience.

I was a bit thrown the first time I sat down with Hand of Fate by the lack of any tutorial or lengthy introduction.  Instead, as a rather brilliant design choice, the developers chose to throw players directly into the game without any real direction.  Each time players enter the game’s world, they take up a seat across from a mysterious dealer, levitating a swirling collection of ancient cards and beaconing you to participate in a deadly game of chance.  Much in the same vein as the old choose-your-own-adventure scenarios, you familiarize yourself with the story and overarching system of rules as the game plays out. 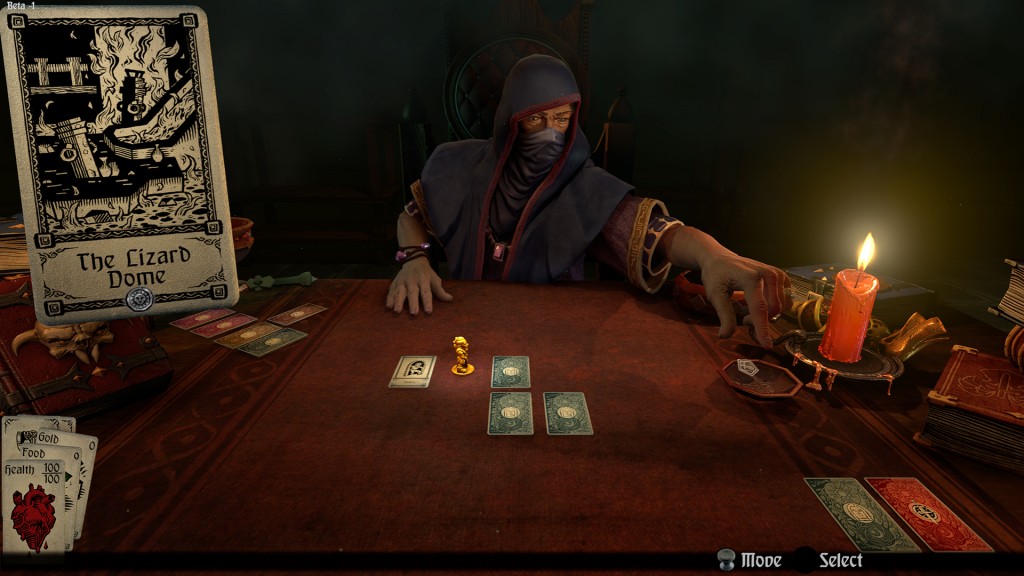 At the onset of each adventure, the dealer places a map-like configuration of facedown cards onto the table from the current encounter deck.  Using a board game-style miniature, you may move to one adjacent card each turn and then reveal the card’s face.  What you find is always a surprise – whether it is an encounter with a local peasant, an ambush by a group of thieving bandits, the option to traverse a booby-trapped maze in search of treasure, avoiding a deadly rockslide, or simply happening upon a merchant – you never know what horrors or helpful items await you.  Ideally, you are searching for the card in each level that allows you to progress forward, whether via something like a hidden staircase or horse-drawn cart. 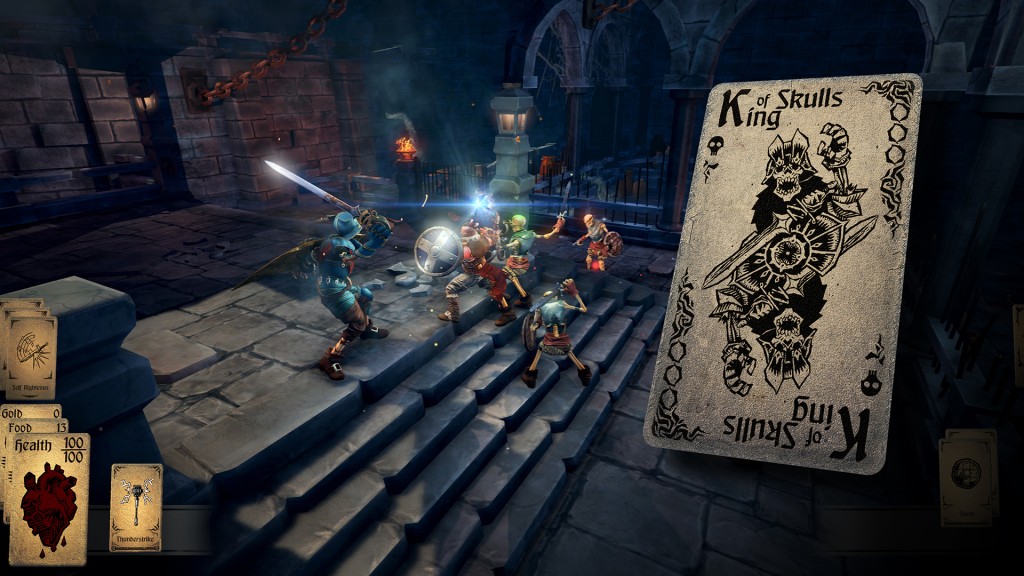 Since there is such a random element in the way each level plays out, players may become severely wounded or die prior to completion, ending the current mission.  When you encounter certain cards, such as one signifying a run-in with a band of monsters, you may be presented with an option to run away or an option to try and stealthily take on of them out.  Choosing the option to run away may result in the dealer shuffling a number of “success” and “failure” cards together and presenting them to you to draw one from a facedown lineup.  A “failure” would likely result in encountering all the monsters or simply taking the effects of “wound” cards.  Conversely, succeeding at taking out one of the monsters via a stealth approach may result in you facing fewer monsters in combat with the added bonus of gaining new equipment or replenishing resources. 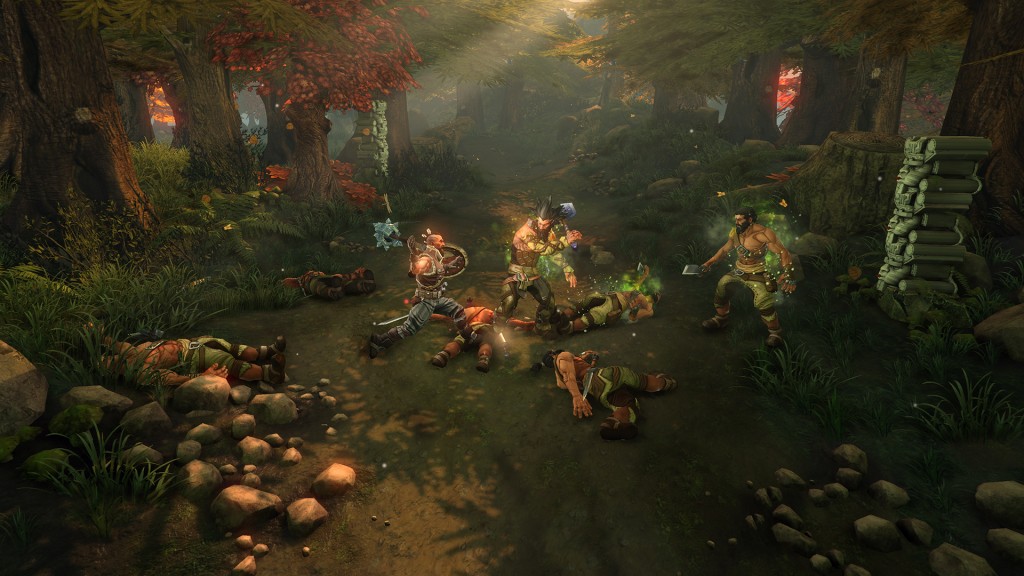 Resource management is important, especially in later levels where the playable card area gets larger, because you need to consume one unit of food every time you move your playing piece to another card.  Food can be purchased at shops for gold but, if you have no food, moving to a new card will cause you to take health damage.  This can make it tough to backtrack over previously explored cards in search of the exit or even a merchant as choosing the wrong path can cause significant health damage to an unprepared player.  A player’s health may also take a hit while in actual combat.  Many situations will transport the player from their seated position at the table to a three dimensional arena where they must battle enemies whose type and numbers are dictated by drawn monster cards.  The combat system is simple, straightforward, and fun.  The face buttons are assigned to attacking, evading, stunning, and blocking/countering maneuvers.  Using the bumpers, players can also use their weapon’s special ability and any current blessing power they may have acquired. 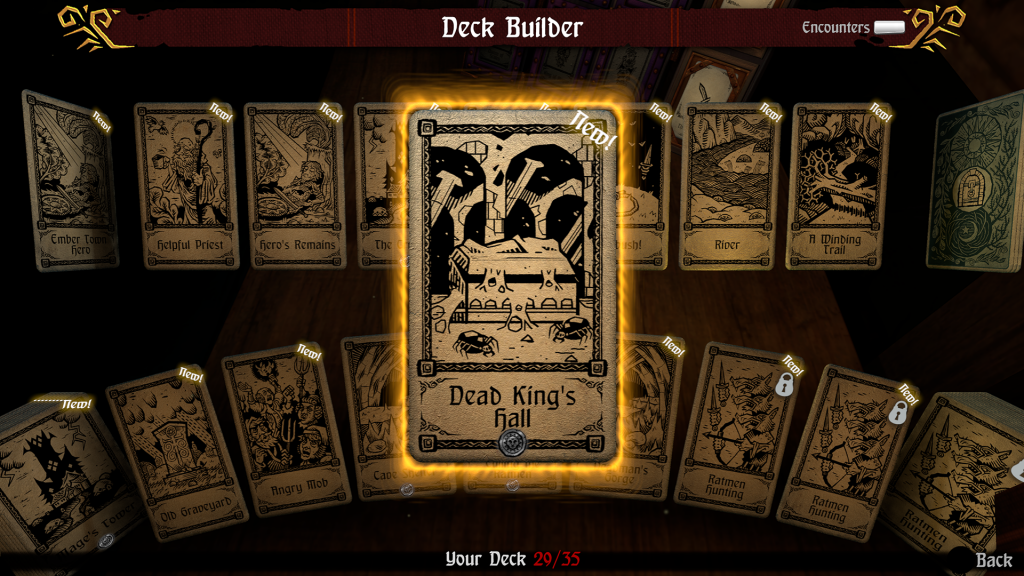 Ultimately, if you are able to stave off starvation and mitigate your damage long enough to reach the mission’s final boss, you face these high-powered foes in a bid to shut them down and move onto the dealer’s next deck.  Each successful encounter and defeated boss grants players with a number of helpful cards for their collection.  These may include benign encounters, upgraded weapons and shields, and formidable armor.  Before proceeding to the dealer’s next adventure, you are able to add some of these cards to your deck, improving your chances of earning powerful items during your quest.  Of course, as you become more powerful, the dealer will grow more malicious and unforgiving with the challenges he includes in his encounter deck. 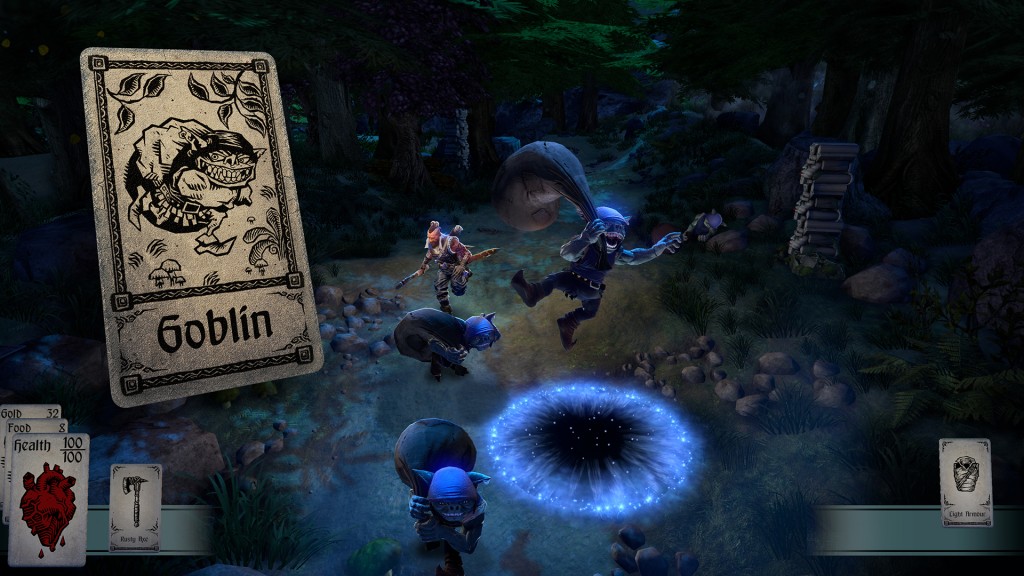 This evolving gameplay mechanic is what drew me in the most and kept me glued to my screen for session after session.  Even while much of the game is left to chance, you never feel like it’s treating you unfairly of that you never have a fighting chance to turn your luck around.  Even when the difficulty spikes toward the end, you continue to earn new cards to tweak your deck with in an effort to influence a more favorable outcome. 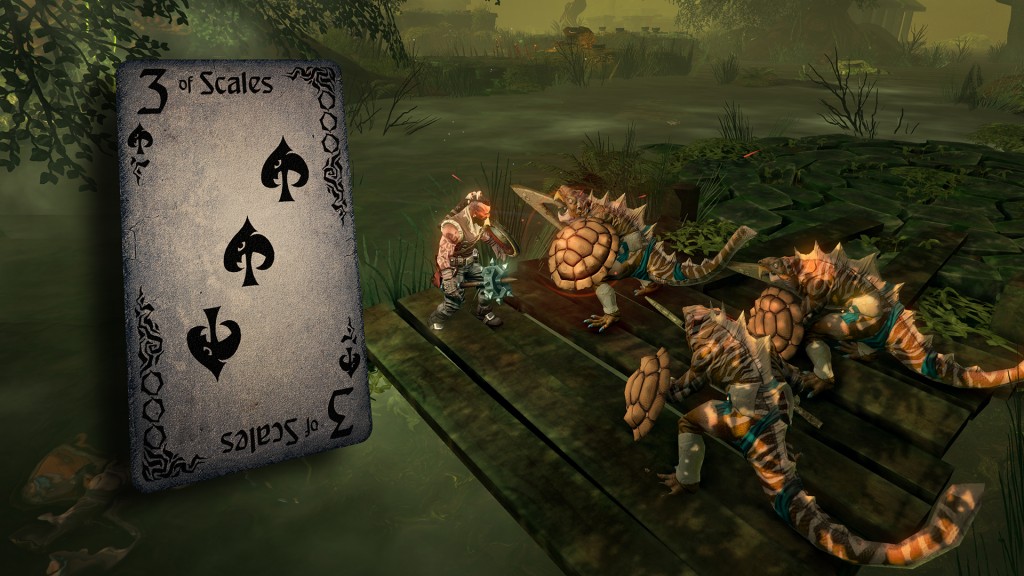 Once you make enough progress in the game’s story mode, an “endless mode” is also unlocked that let’s players try their luck and skill at a never-ending series of encounters.  This, coupled with Hand of Fate’s core deckbuilding mechanic, means that each time you sit down for a play session, it will be a slightly different experience.  The unpredictable nature of the cards, the strategy of how to explore the area and deciding when it may be worth it to double back in search of a boon, and the variable combat scenarios make the title highly replayable and a ton of fun to kill some time with.  With a beautiful, highly stylized aesthetic and some pretty fantastic voice acting on the dealer’s part, Defiant Development has crafted an incredible fantasy world that’s easy to get lost in.  This is one of the most exceptional downloadable console titles I’ve played in some time – make a point to check it out when it launches later today, February 17th, at 4pm PST on PSN and Xbox Live.