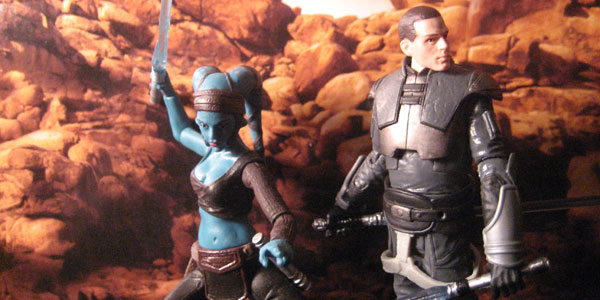 Hasbro will re-issue a new assortment of some of the hardest to find figures from Star Wars: The Vintage Collection in early 2013.

2012 has been a weird year for Hasbro, one that saw cutbacks in production value, and a plague of distribution nightmares.  We jaded GI Joe and Marvel fans thought nothing of it, but this was the year that even Star Wars, Hasbro’s golden child, fell victim to distro woes.

The amazingly cool Vintage collection was burdened with an overstock of first wave figures (based on the universally-loathed Phantom Menace), and aside from Darth Maul, the wave just sat there.  This is the wave we’re still seeing clogging up shelves at Target and Wal-Mart, and one that Toys R Us is mixing in with the new “lost” wave.  The problem being, there were a bunch of waves that should have hit in between, which barely trickled to retail before disappearing completely.  These waves would give us some supporting characters from the movies, like Wedge Antilles, plus some Expanded Universe figures from the likes of Knights of the Old Republic and The Force Unleashed.

These waves didn’t hit in 2012, blocked by old stock, but now Hasbro is doing fans a solid– while it was previously announced the Vintage Collection will be going on hiatus until 2015, the company is releasing a final case assortment, due in February, which will deliver many of those short run, in-demand figures.  I think it’s a great move on Hasbro’s part, one that should earn them the tidy little profit now going exclusively to eBay scalpers, while simultaneously giving collectors another– or in many cases first– chance to own these very good toys.  I just hope the retailers keep the Vintage line as part of their aisle mods long enough for this wave to hit.

Here’s the full word from Hasbro, including which figures will be included in the new packout:

Great news, STAR WARS action figure fans! Hasbro will be re-issuing “fan favorites” from the popular VINTAGE line. We heard fans loud and clear, and as such only the “best of the best” characters from previously released waves will be featured in the revived line. The new series of VINTAGE figures will be available starting in early February 2013. Distribution of characters may vary by location and is not controlled by Hasbro, so please check your local retailer for your favorite characters around that time.

Characters to be featured in the line include the following in the U.S. market: