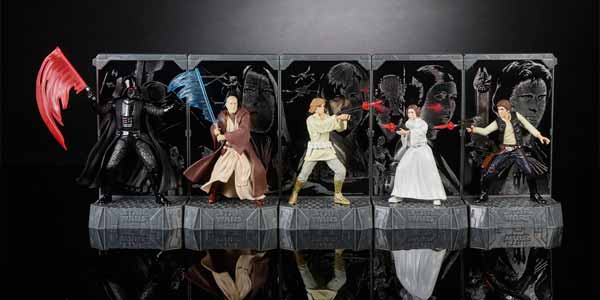 Star Wars and Hasbro celebrate the 40th anniversary of Episode IV: A New Hope with a new branch of the Titanium Series, a return of the Unleashed concept, and more.

2017 marks the 40th anniversary of George Lucas’ original Star Wars, and Hasbro is celebrating the occasion.  The first 40th Anniversary products they have officially unveiled are the long-rumored die cast figures based on the core cast of Episode IV, which we now know will be released as 3.75″ scale figures under the Black Series: Titanium banner.

Will these non-articulated, die cast figures fare better than the ships and helmets which have failed to  catch on at retail?  We will see… I like the idea of alternate piece accessories which can add to the customizable display of your figures, as well as the combining bases… and it’s a brilliant move to release these guys in the classic 3.75″ scale.  I predict these figures will do better than previous Titanium releases, but won’t hold a candle to the sales of plastic action figures, be they 6″ Black series, 5 POA basics, or 3.75″ super articulated.  A new SKU is typically not a bad idea for a toy company, although I hope the 40th anniversary theme expands to the toy lines I mentioned above, as well as these new items. 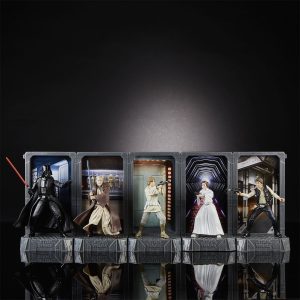 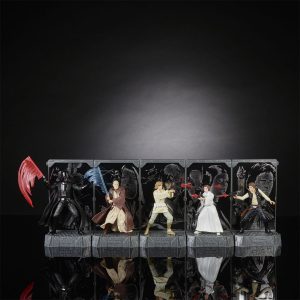 To me, the most interesting new Star Wars SKU from Hasbro is the Centerpiece Collection, which seems to be an organic extension of the gone but never forgotten Star Wars Unleashed series.  The Centerpiece line promises to continue the dramatic, statue-esque aesthetic of that toy line, while also adding interactive effects to the equation.  To quote Hasbro in their press release for the line:

The downside of these added light and sound features (and the retail landscape a full decade since the Unleashed series was available) is a pretty steep price tag.  An Empire Strikes Back era Luke Skywalker will be the debut release of the line, at an SRP of $49.99, which seems high to me.  It’s not unlike the 12″ Marvel Legends Hasbro debuted in 2016.  Recent news of Hulk and Thor figures joining that toy line suggest sales of last year’s figures was adequate, despite their tendency to stick around on retail shelves throughout the holiday season… so maybe the Centerpiece collection will serve as the high-end, purely collector-driven analogue for Hasbro’s Star Wars collection in 2017? 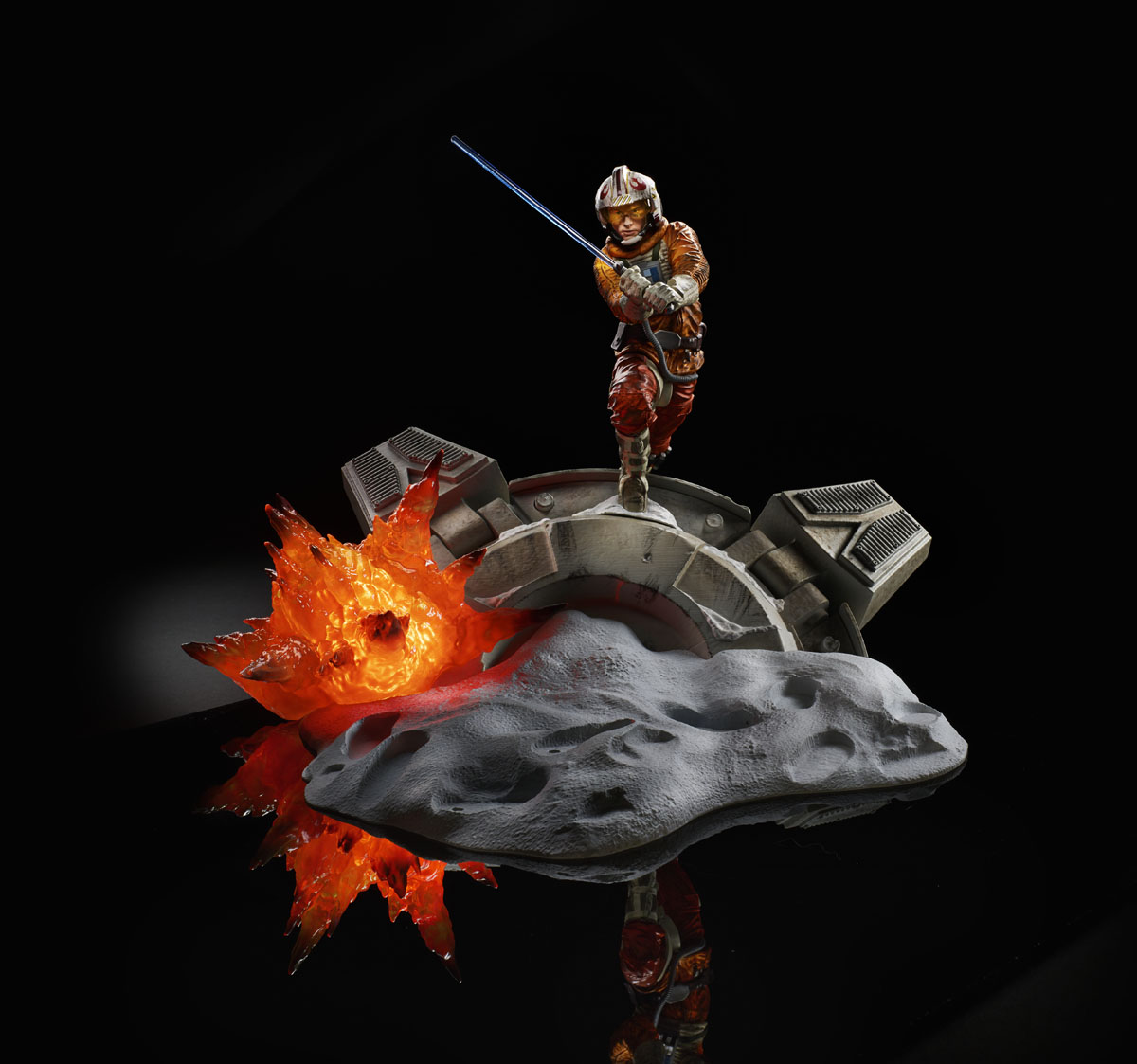 I adored the Unleashed collection, and while I’m telling myself that I can’t go anywhere beyond the 6″ Black Series and 5 POA Star Wars Universe formats I’ve already committed to, news of the Centerpiece collection seems undeniably enticing to me.

While I grapple with resisting adding a THIRD Star Wars format to my collecting habits in 2017, let me ignore that internal struggle by also sharing some details on the upcoming Obi-Wan Kenobi Force FX Lightsaber and the new 40th Anniversary Star Wars Monopoly game, both slated for release in 2017, as well:

The power of the Force is in your hands with the STAR WARS: THE BLACK SERIES FORCE FX LIGHTSABER! This incredibly detailed weapon features a quality metal hilt, built-in accelerometer, realistic light effects, and battle-clash sounds. Become a master of the Force like OBI-WAN KENOBI. Each lightsaber sold separately and includes a clear display stand. Requires 3 1.5V AAA alkaline batteries, not included. Available at most major retailers and on HasbroToyShop.com. 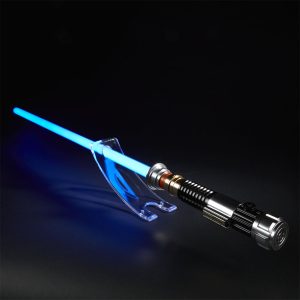 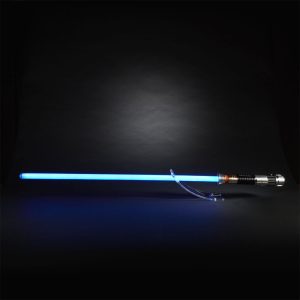 Celebrate four decades of STAR WARS history with MONOPOLY! Featuring graphics of iconic characters and classic movie moments from STAR WARS EPISODE IV: A NEW HOPE, this 40th ANNIVERSARY Edition Game takes you back to when it all began. Based on classic gameplay with an intergalactic twist, players can travel around the galaxy and build bases and fleets. When every space is owned, count up the fleets & bases. The player with the most spaces on the winning side is the ultimate winner! The MONOPOLY: STAR WARS 40th Anniversary Edition Game includes 1 Game board, 6 Tokens, 28 Title cards, 16 Force cards, 16 Smuggler’s Cargo cards, 32 Fleets, 12 Bases, 2 Dice, and 1 Money Pack. Available at most major retailers nationwide and HasbroToyShop.com. 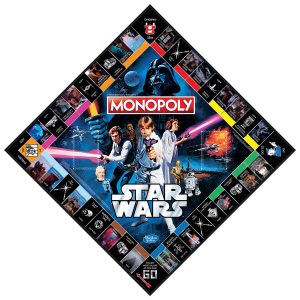 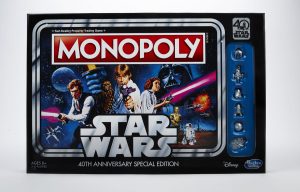 We’ll have more coverage of Hasbro’s 2017 plans for Star Wars and beyond next weekend at NY Toy Fair, but in the meantime, we’d love to know what you think– are you stoked for these new Star Wars toy formats, or would you prefer Hasbro stick to the toy lines they’ve got for the 40th Anniversary, The Last Jedi collection, and beyond?…