Hasbro Delivers Some Updates On Their Marvel Plans 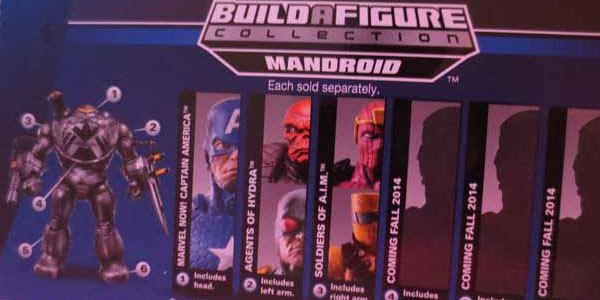 Some good news, some bad news, and some non-news on Hasbro’s Marvel brand plans.

None of Hasbro’s Marvel team were in attendance at New York Comic Con this year, but they relayed some new information after the pre-NYCC party.  Jay C. from Marvelous News posted a video recap on YouTube featuring Hasbro’s details on next year’s Captain America and Spider-Man Legends, as well as the final fate of the Marvel Universe three-packs, the missing Marvel Legends variants and the upcoming Jubilee Wave.

It’s a lot of info, coming at a great time as 2013 starts to draw to a close and we gear up for a possibly exciting 2014.  I have the video embedded below for your viewing pleasure, but because I am a click whore and want all of your lovely search traffic in my Google Analytics, I’m also writing down some of the bigger news points.  So here we go:

In the current battle for retail space (and against the aggressive and caustic ignorance of buyers for stores like Target and Wal-mart) there’s bound to be some casualties… And among them are the final Marvel Universe 3-packs, which have been cancelled.  These include the Thor themed Asgardian pack with Valkyrie, Executioner and a new, helmet-less Thor, and the Astonishing X-Men pack, set to feature Astonishing Cyclops, Emma Frost and Juggernaut Colossus.

“Those 3-packs will not be coming out in that format. However, some of the individual figures from the 3-packs will be released in the 2014 3.75″ assortment as single-carded figures, so they will make their way out to consumers. It is always important for Hasbro, when it can, to deliver figures that have been publicly discussed at convention panels, toy fairs, etc.  As such, while the packaging format may differ, the brand team is looking into ways to make these figures that were intended for release in 2014 available to consumers.”

So we will likely see at least some of those figures in 2014’s Avengers Universe.  I’d bet we’ll see at least the new Thor (an easy variant of an A-lister) and Valkyrie turn up, with Executioner being a longshot.  For the X-Men, Cyke and Emma are both big enough to justify inclusion eventually (especially in these costumes they wore during Avengers vs. X-Men) but I think Jugger-lossus is a goner.

The other downer from Hasbro?  There’s no news yet on the growing list of Marvel Legends variant figures, which the toymakers said they would be shopping for a new home at Comic Con.

“There is currently no set plan for these figures in 2014, but the brand is looking into the possibility of offering some previously unreleased characters in the future somewhere in the Marvel line.”

Just because there’s no plan yet doesn’t mean these figures are cancelled.  As has previously been mentioned, all of these variants– from Blade and Moonstar, to Phoenix, classic Hawkeye and Bulldozer– have been tooled, so Hasbro already finished the heavy lifting on them.  I think there’s a shot we will see some of them rolled in to movie-related Legends lines in 2014, or (as has often been predicted) some kind of exclusive series for a store like Toys R Us or a distributor like Diamond.  Fingers crossed, we will hear some news about these at Toy Fair… but in the meantime, I’m calling it bad news just because I want to complete the Wrecking Crew NOW, not a year from now.

It wasn’t all doom and gloom, though.  Hasbro once again helped confirm the notion that they have gotten a handle on their variant/ swap figure dynamic, and that the system would be much smoother when the Captain America Legends hit early next year.

“For the Captain America 6″ figures, the swap figures will be offered alongside their variants in the same wave.”

Okay, so the wording can be vague depending on how you read that, but I am inclined to believe we will be seeing the Hydra Soldier and AIM Soldier variants in EVERY case, much like the Blastaars which shipped together in all Marvel Universe Wave 21 boxes.  That’s great news, especially since they are all part of a sure to be heavily ordered first wave, so it appears there will be plenty of these troop builders to go around.

The other really intriguing thing that came out of the Q&A was this tidbit:

“The Spider-Man 6″ line will offer the swap figures in a different wave, however the brand team is committed to getting all of the planned figures out for each line in some capacity.”

We’ve seen the six figures that make up Spider-Man Legends already, and none of them appeared to be variants… so the question now is, will the lineup feature less than six figures to build the BAF Green Goblin, or does Hasbro have some more swap figures we have yet to see?  That Superior Spider-Man wouldn’t take much work to become the first really good Spider-Man 2099 in Legends scale, I’m just saying…

It’s odd that even in this flurry of new information, Hasbro remained silent on the final “traditional” wave of Legends.  The Jubilee wave– which was set to feature Flash Thompson Venom, Batroc, Blizzard, Songbird, Tiger Shark, Nuclear Man and Marvel Now! Thor– was on display at San Diego Comic Con with a release date “To Be Determined,” but since then we have heard nothing.

Many collectors are assuming this means the wave is lost, and will have to find homes in the future movie style assortments, like the running change figures.  I’m not so sure.  It’s been months since the (technical) release of the Rocket Raccoon wave, so it would make sense for Hasbro to have produced a final wave of figures ready to go for Holiday retail.  And just because there are no preorders online for this wave doesn’t mean they haven’t been solicited.  The Holiday season is a crazy time in the toy world, and new stuff tends to surface alongside its solicitation, or even before in some cases.  There’s no guarantee yet that this wave is on the way, but at this point I really wouldn’t be surprised if it actually was.

So 2013 may have been a tumultuous year for Hasbro, but I’m glad to see they are learning from the challenges they have faced, and are crafting 2014 into a pretty exciting year when it comes to Marvel.

One of the things that’s most impressive about the movie work Marvel has done is how they continue to cleverly bend the rules of a bloated, crappy industry and manage to sneak out movies that are way ahead of everything else in their genre.  It looks like Hasbro is taking that same approach to their toys, which is awesome.  Virtually every toymaker hit a brick wall when the big box stores did an about-face and basically ruined the collector’s toy market so they could meet the lowest common denominator in their aisles, and that won’t change.  But Hasbro’s movie tie-in approach is working within that system, and if it succeeds, we could well be seeing a true return to form on toy shelves in 2014.

Check out the entire video from Marvelous News below: