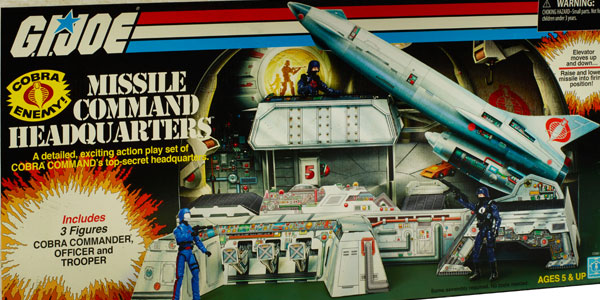 One of the most obscure G.I. Joe releases is making its return at Comic Con.

Talk about a blast from the past! In the very earliest years of A Real American hero, the original G.I. joe playset was the incredibly rare and little remembered Cobra Missile Command Headquarters.  This set, a Sears exclusive back in 1982, contained three Cobra action figures and a multi-dimensional cardboard backdrop, which emulated a missile base being operated by the ruthless terrorist organization.

Now, Hasbro is bringing this set back in all its two-dimensional glory, replicating the cardboard playset perfectly and packing it with upgraded, Modern Era action figures of Cobra Commander, Cobra officer, and a Cobra Trooper… all packed in a box that reproduces the original releases artwork to a tee.

Being composed virtually entirely out of a biodegradable material, the original Missile Command Headquarters is probably the single hardest to find toy in the mass released Real American Hero toy line… so this re-release promises to be the perfect addition to any die-hard Joe fan’s collection.  Bravo, Hasbro!

Get more details on the new Cobra Missile Command Headquarters below, along with some photos courtesy of Hasbro.  This set will first be available at SDCC this July, but limited quantities will also be available at HasbroToyShop.com after the show. 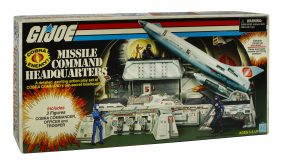 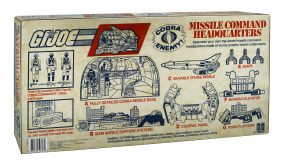 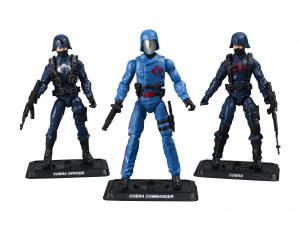 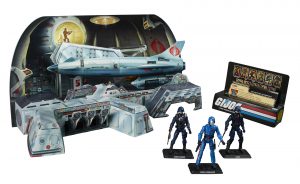 Cobraaaa! One of the rarest of all G.I. Joe playsets is back! The G.I. Joe Cobra Missile Command Headquarters, this convention exclusive is a faithful reproduction of the original and iconic Cobra Missile Command Headquarters Set from 1982. It recreates the classic design of the original in exacting detail with a weathered finished, following the original die-lines with all new re-created graphics. Assemble the highly detailed, sturdy graphic board components to build a headquarters that includes missile base, missile support systems, cruise missile, control panel, movable elevator, work platform, and seats. The set also comes with reproductions of the three figures that came with the original set – Cobra Commander (with a logo that is an homage to the original, first version Cobra Commander logo), Cobra Officer, and Cobra Trooper. Set includes file cards for the figures, as well as a file card holder for the cards. The G.I. Joe Cobra Missile Command Headquarters will be for sale during San Diego Comic-Con 2017. Following the convention, a limited number will be available on HasbroToyShop.com.