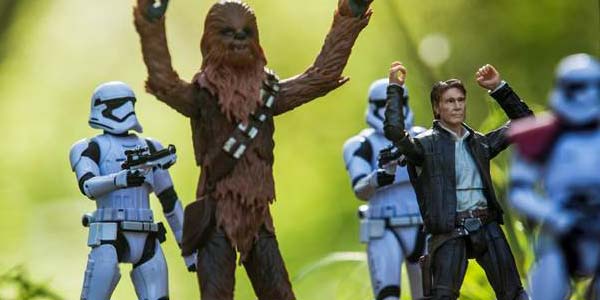 Hasbro is inviting Star Wars toy collectors to get in on the action with a cool new fan photo campaign.

If you’re like me, you probably don’t spend too much time actually playing with the toys you collect.  Limitations on space and time (and of course, the judgmental eye rolls of significant others) can be a little restrictive to this hobby.  But one way many of us DO get to actually play with our toys is through photography, and Hasbro is celebrating this with their new #HasbroToyPic Fan Figure Photo initiative.

A cross section of Star Wars toy collectors have been taking some truly amazing photos featuring the various action figures, accessories, and vehicles released in Hasbro’s long-running toy line.  Photographers like SgtBananas, StarWarsTheBlackSeries, and Swittpics have been creating some amazing shots using the same little plastic guys most likely sitting on the shelf to your left.  And the great art these folks are creating hasn’t gone unnoticed by Hasbro.

The toymakers want to see what photo skills the rest of us have, through their new #HasbroToyPic Fan Figure Photo Series.  The premise is simple– take the best, most interesting, and all-around coolest photos possible of your Star Wars toys, then share them on social media using the #HasbroToyPic hashtag.  Hasbro will be curating all the photos on the hashtag, and selecting certain images to create a huge timeline display at their booth at San Diego Comic Con this July.  What’s best is, all photographers will be credited for their pictures, meaning your work could be part of Hasbro’s Comic Con display!

Whether you’re looking for scenery for your photo shoot, or just a cool way to spruce up your figure display, head over to Hasbro Pulse where you can download some really cool environment backdrops.  This is a really cool initiative, you guys.  Take it from me, taking photos of toys is actually a super fun thing to do, and it’s a great way to get creative with all this stuff that would otherwise just take up space in our living rooms and offices.  The #HasbroToyPic program will run from now until May the 4th, so break out that camera and start playing with those action figures… and be sure to tag @KastorsKorner in your creations, too… I want to see what all of you come up with!

And for the record, the pic at the top of this post is by Sgt Bananas.  Check out more of his awesome work here.