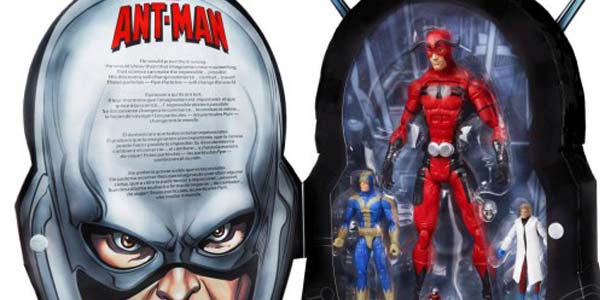 Two big exclusives based on Marvel’s smallest hero are on their way to Comic Con this summer.

I had assumed that killer Dr. Strange box set would be the only Marvel themed entry in Hasbro’s list of Comic Con exclusives this year, but I was pleasantly surprised to learn that we’re seeing some more Marvel love, as well.  The coolest new entry is the Ant-Man box set, which includes five Ant-Man figures… each at a different scale!

The lineup includes a 12″ Giant Man (using a Marvel icons buck, and with the same costume as the just-released Legends Giant Man), a 6″ Goliath (on the Bucky body, to establish continuity with the previous Hank Pym Legends figure), and a 3.75″ Hank Pym in lab coat, complete with removable helmet.  The set also features a 1.5 inch Scott Lang in his modern costume, and a classic 60s Ant-Man clocking in at 1 inch.  I’m pretty sure this guy is from the classic Avengers Marvel Universe 3-pack, but can’t say for sure because of how small he is in the photos.

This is a really great set, especially because Ant-Man’s size changing powers means it’s perfectly applicable to both the Marvel Legends and Marvel Universe collections.  And the box art is kind of cool, replicating Hank’s iconic helmet, even down to the articulated antennae on the sides.

Here’s some more images and details from Hasbro about this exclusive, which will be available at Comic Con in July: 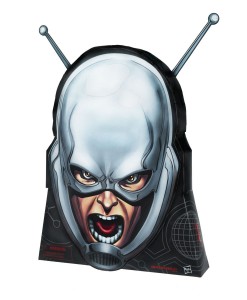 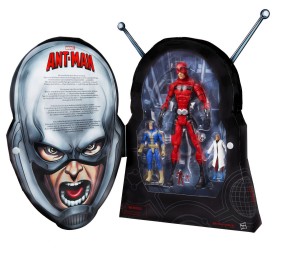 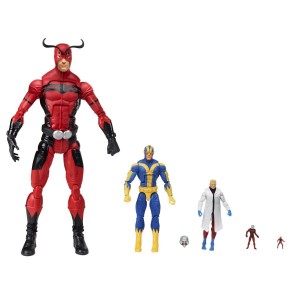 There’s also a movie-based Ant-Man, measuring in at 0.75 inches tall.  This cinematic Ant-Man seems to be identical to the pack-in with the movie Ant-Man Legends figure, but the neat packaging will be exclusive to Comic Con.  The figure is packed on a tiny little blister card, inside a slip box made to look like a 1:1 scale match box, with a Pym Technologies logo printed on the side.  I guess scientists need a light, too, sometimes?

Here’s some pics and more info from Hasbro… This set will set you back $10… essentially you’re just paying for the neat packaging, so ask yourself if a Hank Pym branded box of matches is a worthy prop replica in your collection. 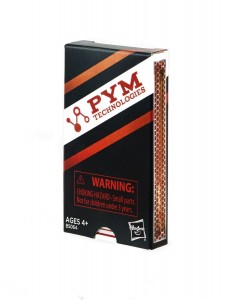 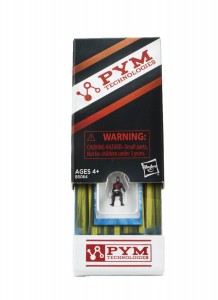 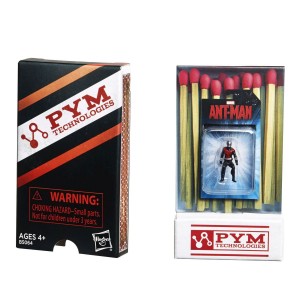 MARVEL’S ANT-MAN 0.75” Mini Action Figure
(Ages 4 years & up/Approx. Retail Price: $9.99/Available through HasbroToyShop.com or Booth #3213 at Comic-Con International in San Diego)
Get ready to root for the little guy! Hasbro’s smallest ever Marvel action figure the hero from the hotly anticipated film MARVEL’S ANT-MAN is only 0.75 inches tall — that’s smaller than a penny (or a really big ant)! This movie-accurate, non-articulated mini-figure comes in special packaging designed to mimic a matchbook. The matchbox tray slides out to reveal the figure in an ANT-MAN-sized blister card. Following the convention, a limited number will be available on HasbroToyShop.com.

Hasbro’s Comic Con exclusives have been pretty awesome this year.  They’re really making me sad I won’t be making it out to this year’s show.  Hopefully Hasbro’s 2016 exclusives lineup is just as awesome, so I can see them all in person at next year’s Con.