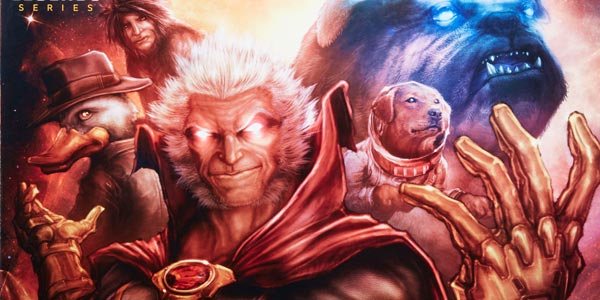 This is your chance to add The Collector’s Collection to your, um, collection.

A few weeks back, images surfaced on eBay of what appeared to be a 3.75″ scale Marvel Legends box set featuring The Collector along with some in-scale mini figures such as Lockjaw, Howard the Duck, Moon Boy, and Cosmo, the space dog.  With no origin for the figures, it was widely assumed this set would be a San Diego Comic Con exclusive, and the widely assumptive were correct!

Hasbro has now officially unveiled the SDCC box set, complete with our first look at the slick box art, which emulates the look of The Collector’s vault, with the various figures trapped inside their own pods.  How this sort of pod would hold a giant teleporting bulldog like Lockjaw, I cannot answer… but the mere existence of a giant teleporting bulldog like Lockjaw means our disbelief should already be pretty suspended.

This is a really cool set… the Hasbro team has been developing some really creative concepts for their 3.75″ Marvel exclusives these last few years– from the wearable Infinity Gauntlet in 2014, to last year’s awesome multi-scale Ant-Man box set– and the Collector’s Vault fits right into this fun and unexpected motif.

Here’s a look at the first professional, hi res photos of this SDCC exclusive, along with more details straight from Hasbro: