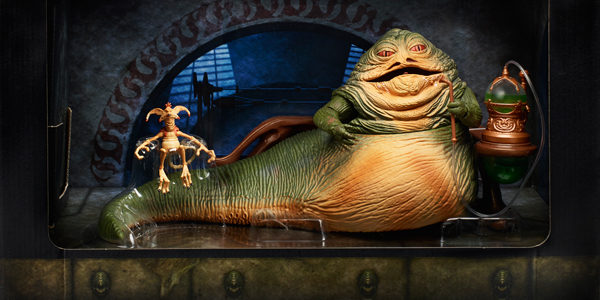 Time to bring a bigger suitcase to San Diego.

It’s Star Wars day, and there’s bound to be lots of exciting reveals throughout the day.  Hasbro has teased that we’ll see a new Star Wars Black Series figure reveal, and we may even get some new Episode VII news, but to kick things off, Hasbro has officially announced their San Diego Comic Con exclusive– Jabba the Hutt with Salacious Crumb– via Entertainment Weekly.

This is the first time the intergalactic gangster will be available in 6″ scale, and while the Hutt himself should hit mass retail, the SDCC edition will likely be the only version to include his cackling minion and his hookah pipe.  Back at Toy Fair, Hasbro basically already confirmed this exclusive when they showed a quick glimpse of Salacious Crumb, but it’s still exciting– this is a great choice for an exclusive variant of the Star Wars villain, and one who will work out great with last year’s Han Solo in Carbonite accessory.

The figure will come packed in a Black Series bow, the first we will see with the revised blue and black color scheme, which features the line “Peecha wangee cogh pah. Tong nam nee took chan kee troi. Soo thawt du mah kee chalia.” That translates from Huttese to English as: “I will not give up my favorite decoration. I like Captain Solo where he is.”

No word on price yet, but for any Black Series fan, this is clearly the version of Jabba to go for.  He looks awesome, comes with a great bunch of accessories, and will be a totally welcome addition to the 6″ Star Wars universe.  I’m stoked! 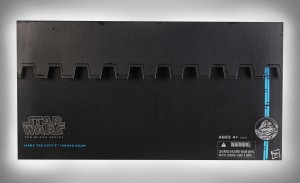 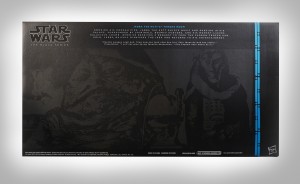 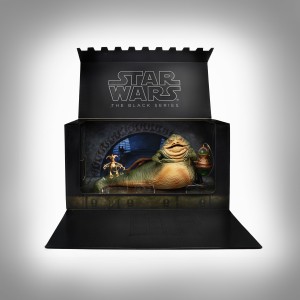 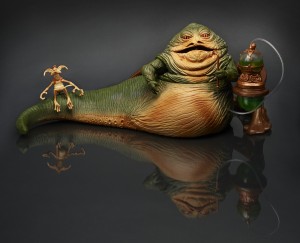