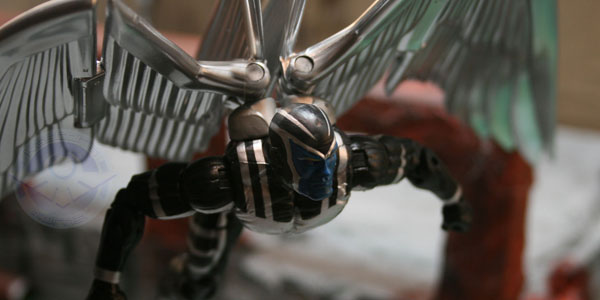 2012 marked the Return of Marvel Legends, and Hasbro is going all-out with an amazing box set of Legends figures available at Comic Con. The Uncanny X-Force set delivers stunning new versions of Wolverine, Psylocke and Archangel, all in their X-Force gear, and promises to round out the covert ops mutant team nicely.

Team-building is a big deal for many collectors. There’s nothing quite as frustrating as only have half a team assembled, with no idea when the rest will join them. With Warpath and Fantomex already released and the black and grey Deadpool coming this Fall, releasing a set with three more core X-Force characters was a brilliant move on Hasbro’s part.  The impressive collection not only rounds out the core team well, but offers a great sense of escalation– last year, we got one Marvel Legend, the lightning deco Thor… this year we get three great new figures. 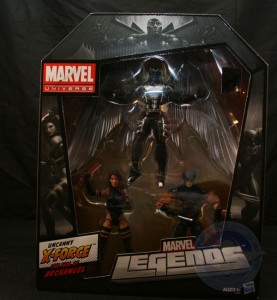 And when I say great, I mean it. All three of these figures are home runs, with all the great sculpting we’ve seen in the Return of Legends series, lots of great articulation and some very well-handled parts reuse. The figures included are themed around the Fall of Archangel storyline from the comics, and the inclusion of these three key players makes perfect sense.

When Toy Biz released Psylocke in their Legends line, she was great, one of the finest female figures released to that point. However, that was almost ten years ago, and it feels like time for Betsy to get a new figure. Hasbro answered that call well, logically using the Elektra body for the mutant ninja. For some reason there are collectors who don’t like this female buck, but I still think it’s fantastic, the perfect blend of good articulation and an aesthetically pleasing design. Yes, Psylocke has slim hips and thighs here, but c’mon– she’s a ninja, what do you expect?? 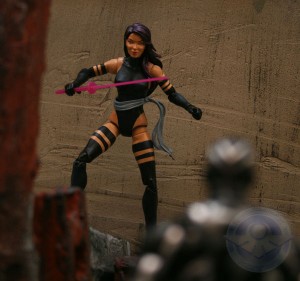 While I would like to see a new female buck introduced just to add some diversity to the women of Marvel Legends, this body is perfect for Betsy, as is the gorgeous new headsculpt. Unlike the previous version, this Psylocke definitely looks Asian, and has what might be the most beautifully sculpted hair I’ve seen in the Legends series, with her purple locks draping down her back with some strands wrapping in front of her shoulder. Usually with hair, the options are either completely static, or pre-posed in a wind-blown motion, but Psylocke’s sculpt is able to accomplish both a wonderful sense of movement while also avoiding locking her into a pre-posed stance.  Betsy includes a psionic katana, cast in translucent pink plastic, which she can hold well and that really stands out against her black costume. 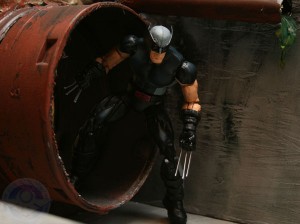 I think it’s saying something that Wolverine– more appropriately the ump-teenth variant of him– may be my favorite figure in this set. Logan is virtually all-new, and this is probably the best version of him ever released in either Legends series. In addition to the great articulation pattern (highlights include the lateral shoulders Toy Biz often used, rocker ankles and hinged wrists), Wolverine also sports an all-new headsculpt that is packed with personality. Caught in the moment just before his growl leads to a grimace of clenched teeth, the snarl on Logan’s lip is incredibly subtle, and perfect for the character. There is plenty of sculpted detail and texture in the mask, and the fins on each side of the head are cast in a thin, soft plastic so they can wrap around the back of the head, as they are designed on Wolverine’s X-Force suit in the comics. The strap-heavy gloves and boots of Logan’s costume are handled perfectly as well, and they combine with the broad chest and thick limbs to give him an appropriately stocky build, which is accentuated even more by his lack of height– while this Logan is still a bit too tall for the 5’3″ mutant, he’s notably shorter than either Archangel or Psylocke and looks great with the team.  And then there’s the claws. Wolverine’s claws have never been translated better in toy form than this– each claw is a separate piece, independent of each other, and each includes a surprisingly fine edge and sharp point at the tip. I’m not sure what kind of paint Hasbro used here, but the silver gives off a surprisingly realistic metal finish without the overly-shiny vac metallization look. These claws are phenomenal, they look great and they’re impossibly cool. One word of warning though– since each claw is a thin piece glued into a slat on the knuckles, they feel like they can get a little loose if the glue didn’t hold right. As such, I’d keep Wolverine packed securely when you’re transporting him on the Con floor or the airplane. 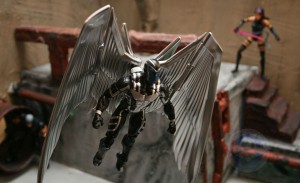 Rounding out the set is the star of this pack’s theme, Archangel. Hasbro revealed their prototype for the new, vastly improved Warren Worthington at last year’s New York Comic Con, but they wouldn’t say where we would see him. A Con exclusive version of Archangel in his X-Force togs makes a great home for the fantastic new figure (Hasbro kind of set the precedent early, releasing the Marvel Universe version of the figure at NYCC back in 2010). Archangel is basically perfect, utilizing the wonderful new buck first seen on Bucky Cap in wave two, with a new head that shows of Warren’s determined scowl and deep red eyes. If you’re reading this, there’s little doubt you picked up Bucky Cap, so it should come as no surprise that this figure looks amazing. What really puts Archangel over the top is the stunning wings, which fold open or can wrap around the front of the figure. These wings are gorgeous, a perfect translation from the comics, and are articulated on three hinges. The wings attach to the figure via a small peg in the middle which fits into his back, and the attachment is nice and secure, so once they’re in the wings should stay in place with no trouble. Archangel’s wings utilize the same very interesting paint as Wolverine’s claws, giving a very realistic metallic look. I was concerned that the massive wings would leave Warren too top-heavy to stand, but the articulation– particularly the great ankles– help keep him balanced, even with the addition of the weight of the wings.

I was sold on the Return of Marvel Legends since the first figures were revealed almost a year ago, but Hasbro has continued to surprise me time and again by how much thought, effort and skill they continue putting into this line. The X-Force three pack is an absolute highlight of the Return collection, and is one of the coolest exclusives available at Comic Con… and since the $50 set includes three figures who would retail separately for about $16 each, this set is also one of the best bargains you’ll find at the show.

Thanks to Hasbro for giving us the chance to get this early look at the X-Force Legends! 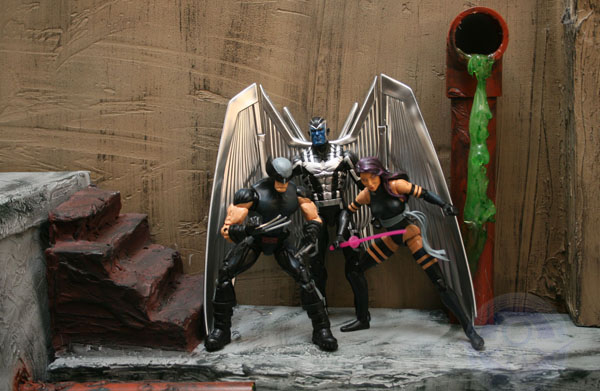 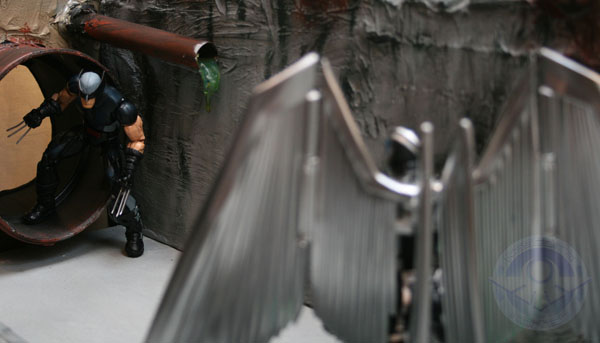 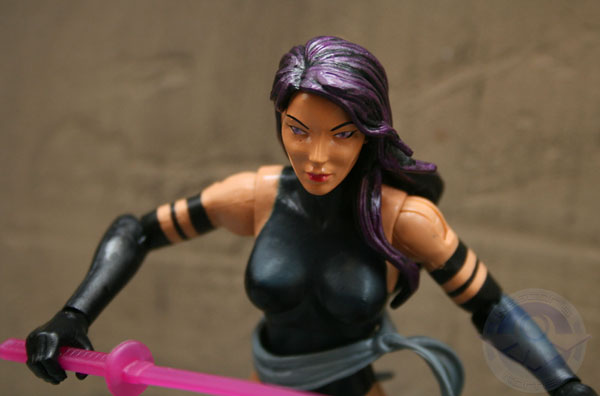 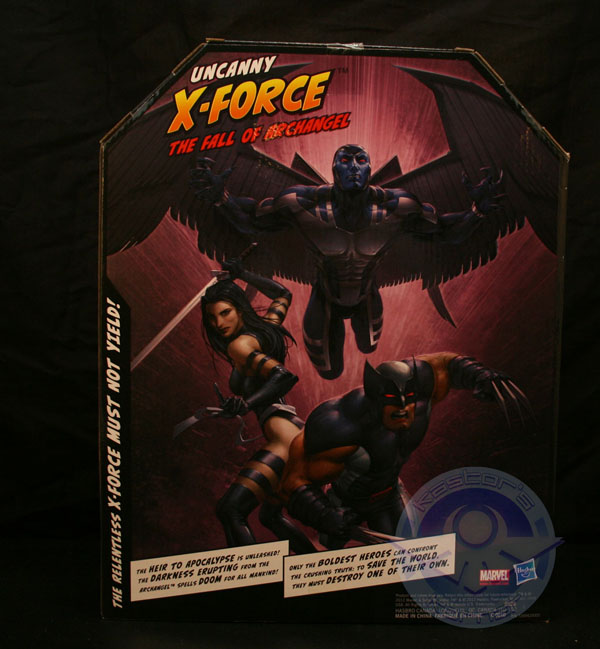