The latest Comic Con exclusive reveal for Hasbro and Marvel ups the ante from Galactus and the Sentinel to bring us the most ridiculously large Con exclusive yet.

Hasbro has been on a roll this past week debuting their Marvel themed SDCC exclusives. The latest is what’s being called the “Super-Helicarrier,” which follows the trend of last year’s Sentinel and 2010’s Galactus in that A.) it’s an alternate-decoed preview edition of a toy that will soon hit mass retail, and B.) it is ridiculously huge.  What’s different about this Helicarrier is an extra foot of length added to the version that will soon be collecting dust at Toys R Us and Wal-Mart.

This is the first time I can think of that an exclusive’s selling point has been “it’s a foot longer,” and for some reason, I find this totally hilarious.

I’m still not sure what inspired this trend of mega-sized Con exclusives.  I get that it’s basically free advertising for the company, in that poor schlubs will be hauling what amounts to a giant Hasbro/ Marvel billboard around with them all day at the convention, but as a consumer it just seems like way more trouble than it’s worth to have to haul a four foot playset from coast to coast. 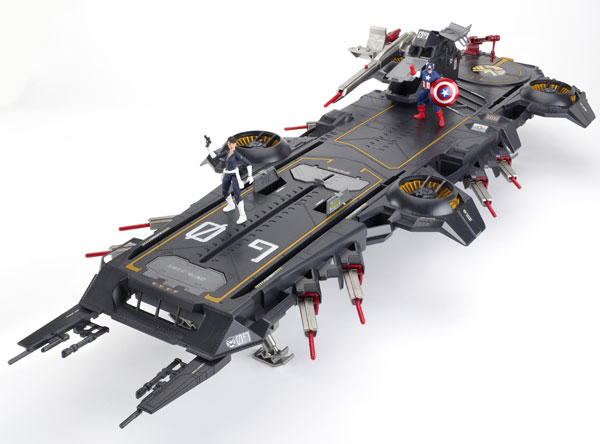 That being said, the Super Helicarrier sure does look neat– with an updated design that matches the Quinjet nicely, some action features and plenty of space for a major heroes vs. villains throwdown on deck, Hasbro did a pretty nice job translating the impossibly massive vehicle into something practical enough to produce while also still looking impressive.  The SDCC set also includes exclusive figures of Captain America and Maria Hill (based on the movie Black Widow body, but in comic colors).

What I find most interesting is the box art, which might be giving us a big hint at more things to come. The Joe Quesada front cover of the package depicts Cap, Maria Hill and Iron Man facing the Masters of Evil on the deck of the Helicarrier. Specifically, they are squaring off against Baron Zemo, Tiger Shark and Nuclear Man (already announced as a SDCC 3-pack)… as well as Whirlwind and Erik Josten Goliath featured prominently. So whether it’s another SDCC set, or something coming to retail, I am pretty confident we’ll see both these villains in a Gigantic Battles 2-pack sometime this year.