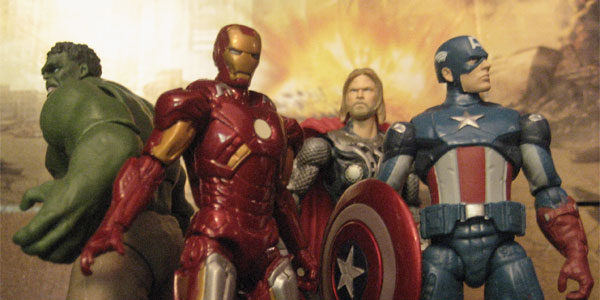 The Avengers movie was not only a great blockbuster, but a smashing success– beating records for the biggest opening weekend of all time, and in no danger of losing steam anytime soon.  But Hasbro’s toy line has been suffering, and is under-performing at the worst time imaginable.  The toy company can still course-correct, but they need to get to work right away. 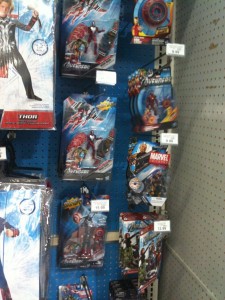 Hasbro’s toy line for The Avengers has met some lukewarm response all along, due to cutbacks that seem to have impacted all the company’s 2012 products.  Limiting the articulation is a deal-breaker for some, but I don’t really mind personally.  The major concern seems to be a drop in production runs.  We know for a fact Hasbro’s early Marvel movie lines like Iron Man 2 and Thor were overproduced, especially the launch wave products.  This let to a glut of unwanted toys clogging up shelves and lead to a limited availability of later waves of figures.  Captain America seemed to correct this to some extent, and we saw a more even distribution of all four waves of figures.  At the time Cap’s brisk but small success at retail seemed like a good thing, but it appears to have brought about a new strategy for Hasbro’s Marvel movie toys, aiming low in an attempt to hit the mark.

The problem arises in that Avengers is a BIG DEAL. Not that Cap or Thor were small potatoes, but Avengers has been the movie all the others have built toward, and has always been potentially the most popular (and the riskiest) of Marvel’s movies. Marvel’s vocal support of the movie should have been enough for them and Hasbro to NOT err on the side of caution when it came to toys– no one could have seen Avengers’ wild success coming at the scale we’ve seen, but it’s not uncommon to know in advance when a movie’s going to be a hit, and quite frankly Avengers had hit written all over it.

So Hasbro entered into their Avengers series with low expectations, and a very concise plan for the toy line– 16 figures, a Quin Jet and a Heli Carrier playset.  I was onboard for the series, and the limited scope of the line is pretty standard for most toy lines right now, and still had room for more than all the movie’s major players. But the real reason I could get behind The Avengers series was my thought that a smallish scope series would lend itself to fast, consistent restocks and fresh products, like we saw last year with Cap. And that is where the current problem lies– The Avengers toys shot low, hit their target and had NO follow through.  The figures were released and sold pretty well, moving consistently on and off shelves leading up to the movie’s release. 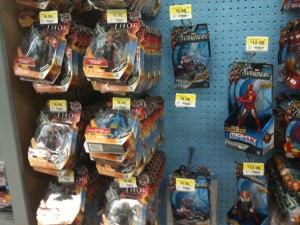 By the time the movie came out, most stores in my area had already sold out of Avengers toys, but the restocks never came. In some stores, such as Toys R Us, it’s simply a problem of not getting in merchandise fast enough. But Wal-Mart (always the worst offender when it comes to toys, somehow) has really screwed The Avengers line. When The Avengers sold out, most Wal-Marts simply restocked the Avengers shelves with old excess Thor and Iron Man 2 stock.  Wal-Mart’s orders are based on their computer inventory, meaning if The Avengers sell out a reorder is typically triggered automatically.  However, getting the figures from the truck to the toy aisle is solely the responsibility of the Wal-Mart employees, and if they see Avengers pegs overflowing with old Thor figures, most seem to think “eh, it’s close enough.”  So all the Avengers replenishments have nowhere to go and are presently collecting dust in a stockroom, at a time when they could be flying off the shelves and into the hands of excited collectors and kids alike, all buzzing off the excitement of just seeing the movie. 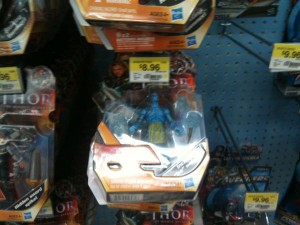 I’m not sure what Hasbro’s strategy was with this line, and whether they intended new assortments to see release much faster than it’s actually happening. I can only hope so, because it seems insane that the yet-to-be released Wave 3– including our first figures of Hawkeye and Black Widow– wasn’t planned to be on shelves by the time the movie hit.  For this line to truly reach its potential, fans of all ages should have free and open access to at the very minimum, all six Avengers heroes, Loki AND his army, and Nick Fury*.  Instead we have half the team and Loki, with the semi-prospect of maybe seeing Hawkeye and a very short-run Black Widow in the next few weeks.  Fury and the Chitauri are on the way, but by the time they get here the big buzz of the movie will have faded as the Summer rolls on and we collectively gear up for the next tentpole Summer movies like Dark Knight Rises, Amazing Spider-Man and GI Joe Retaliation.  NOW is the time for The Avengers… not a month from now, and not when the DVD comes out (the ultimate excuse/ death rattle of toy companies missing the boat on getting their product out on time).

Hasbro has screwed up The Avengers line, but it’s not hopeless– they still have a very easy way to fix this situation and earn as much business as this property deserves.  With empty pegs being occupied by old figures and limited retail space, Hasbro should be working with Wal-Mart and Toys R Us to create PDQs, endcap displays and aisle cubes packed with all the NEW product– if they went this avenue, as we have seen in the past, all the new Avengers figures could be included in these one-off displays, maximizing the amount of toys available for collectors and kids at a time when they are most eager to buy.  I’m aware that Target does have an endcap display for Avengers, but that company is notorious for over-ordering launch wave product, so they’re the only store so bogged down with the first two waves it will be months before they need to replenish. But TRU and Wal-Mart are empty (one because of sales, the other incompetence), and Hasbro needs a non-aisle mod solution in place immediately if they want their Avengers series to capitalize on the winnings of the movie at the box office, because right now their levels of success are light years apart.

(*I know there’s a lot of online caterwauling about the Wal-Mart exclusive 6″ series not yet available as well… while I agree it would be most prudent to release those toys now as well while the movie is at its hottest, the Avengers Legends are clearly intended as a collector’s line, and companies like NECA have proven that Collector-targeted lines can easily succeed after a movie sees release, so the mainstream 4″ line is what Habsro should really be focusing on right now.)