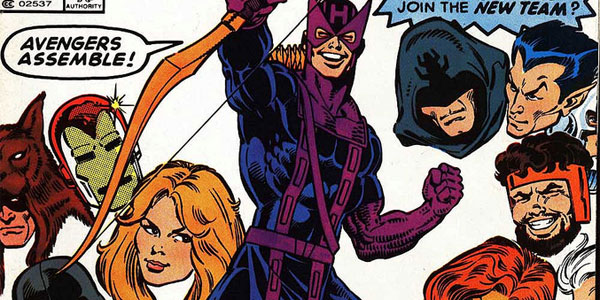 A listing for a new, previously-unannounced team pack in Hasbro’s Marvel Universe collection has fans wondering which three West Coast Avengers we will see at retail.

This week, Big Bad Toy Store opened preorders for the next wave of Hero Team Packs, the 3-pack box sets Hasbro has been steadily releasing in the Marvel Universe series.  We’ve know since Toy Fair that the next assortment on its way would be the totally cool Inhumans pack, delivering great 3.75″ scale versions of Black Bolt, Medusa and Karnak. But the Inhumans aren’t the only new pack listed– it seems Hasbro is also sneaking in a three-pack based on the West Coast Avengers in the same wave!

This is the first anyone has heard about a West Coast Avengers team pack, and with no images available yet, it begs the question– which three West Coast Avengers will it include?  Like every other era of The Avengers, there’s been a ton of characters on the WCA roster since it formed in 1984, but there’s typically been a “core cast” for most of their run, including Hawkeye, Mockingbird, Wonder Man, Tigra, Iron-Man, US Agent, Vision and War Machine. While there’s a chance this set could go with an outside choice like the still-unreleased Ant Man, Moon Knight or even a C-Lister like Shroud, I think the trio will likely consist of characters from the eight listed above.

Most of the team packs have a major character included, as the anchor of the set, and I definitely think we’ll see this again for the WCA. The anchor here would probably be either Hawkeye or Iron-Man, and I can see it going either way.  Both heroes would offer some kid appeal to the set, and would most likely end up straight repaints, which would keep tooling costs low.

So we have our anchor, either way. With two female core team members, neither of whom has been release thus far. I think Mockingbird or Tigra would also be safe bets.  Between the two, I think Tigra would require more effort to pull off, but she’d also make for a more exciting toy to kids and non-fans of the comics– with her claws, tiger-striped skin and fang-adorned costume, the Avenger would certainly stand out nicely on the shelf.

The last figure would likely be another mainstay, and this is where I really hope Hasbro would go the fan service route instead of cost-saving. The easiest thing to do would be pack in a recast of US Agent from the Captain America series.  It would make sense and fit the team’s theme, but would be a disappointment for the many collectors who already have Walker.  I’d much rather see Vision or Wonder Man, both figures much more difficult to track down than US Agent, and both of whom could be reissued straight from the first releases, or offered as new variants– Wonder Man with a safari jacket (likely borrowed from GI Joe parts), or Vision in white, complete with the bare feet included on Paper Bag Man in wave 19.  Both of these variants would make for some variety among the characters, and they’d all fit visually from the same era of the West Coast team.

My best guess– I think the pack will likely be Neoclassic Iron-Man, Tigra and Vision (white).  This pack would make for a great mix of fan service to collectors, and appealing-looking figures for kids and parents, and I’d totally pick this set up.

Who do you think Hasbro will include in the West Coast Avengers pack? How many new figures would have to be included for you to pick it up?  Let us know in the comments!