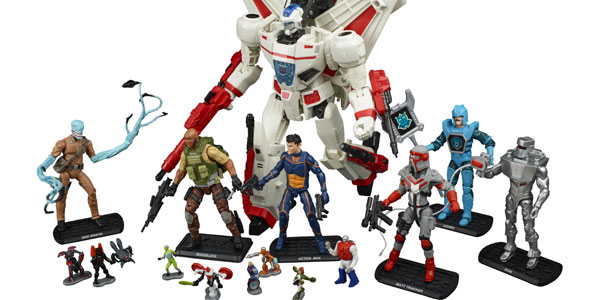 Hasbro’s shared universe makes a stunning debut at Comic Con, with a “Mega-Set” based on IDW’s REVOLUTION comic series.

It’s been in the works for over a year, but we’re getting closer to the full-blown shared universe featuring many of Hasbro’s iconic properties making its full force debut.  In case you hadn’t heard, the idea here is to connect Transformers, GI Joe, MASK, Micronauts, Visionaries, and ROM Spaceknight into a single continuity, so characters can interact.  And interact they will, in both IDW’s REVOLUTION crossover series, and now thanks to Hasbro’s next-level awesome REVOLUTION box set.

The set draws from all corners of this exciting new universe, featuring 3.75″ figures based on GI Joe’s Roadblock, Action Man, Matt Trakker from MASK, Leoric from Visionaries, ROM and a Dire Wraith, along with a squad of Micronauts mini-figures and a comic accurate Jetfire from Transformers.

One of the coolest concepts ever for a SDCC exclusive was Hasbro’s Transformers/ GI Joe crossover box sets… but REVOLUTION pack ramps things up more than ever.

This might very well be THE exclusive at Comic Con this year… at least, as far as I’m concerned.  I’ve been dying for a ROM action figure since I read his comics when I was about six years old, and Hasbro is finally, finally making that a reality… along with a ton of other cool crossover characters.  I could not be more excited about this set.

Here’s some hi res images from Hasbro, along with more details on the set which will be available at San Diego Comic Con, as well as Fan Expo in Canada. 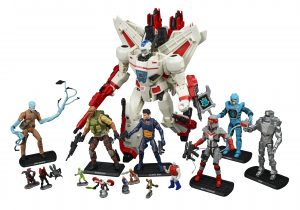 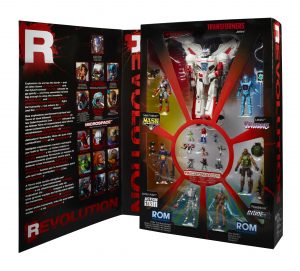 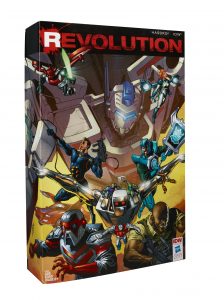 When characters from different story worlds come together in a single storyline, they call it a crossover. For this event, they needed something bigger. MUCH bigger. Celebrate the beyond epic IDW Revolution crossover event with the REVOLUTION Comic Crossover Preview Mega-Set convention exclusive. Featuring 16 characters from seven story worlds, this set serves as a prelude to IDW’s upcoming REVOLUTION: FIRST STRIKE sequel set for later this year. Many characters in this set are making their debut in the 3-3/4” figure format, and for the first time, characters from these brands are presented in a scale that allows the entire Universe to be played together! Includes JETFIRE from TRANSFORMERS, ROADBLOCK from G.I. JOE, ACTION MAN, a team of MICRONAUTS, MATT TRAKKER from M.A.S.K. MOBILE ARMORED STRIKE COMMAND, LEORIC from VISIONARIES and ROM and a DIRE WRAITH from ROM THE SPACEKNIGHT. The REVOLUTION Comic Crossover Preview Mega-Set will be for sale during San Diego Comic-Con 2017. Following the convention, a limited number will be available on HasbroToyShop.com.