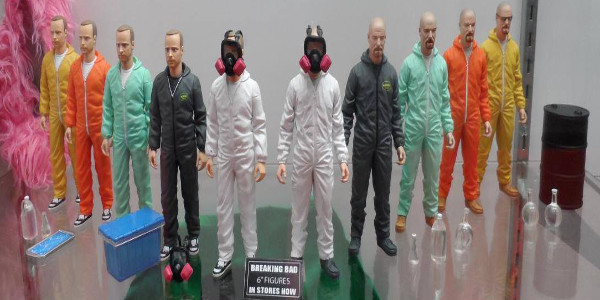 Susan Schrivjer, a mother from Fort Myers, was upset to see her local Toys R Us carrying action figures based on drug dealers. But somehow she’s OK with the rotting corpses from The Walking Dead that are right next to the Breaking Bad figures.

She’s so upset, that she started up a petition to get Toys R Us to stop carrying the Breaking Bad figure, which currently has over 7500 signatures on it. Worse yet, Toys R Us is already starting to cave to the pressure by removing the action figures from their website.

Hey, I’m a parent and I get it. There are some things out there I don’t want my kid exposed to, but I’m not going to have it removed from an entire retail chain. I just won’t buy it. Simple as that.

But it’s not that simple for Schrivjer. She’s already stated: “Kids mimic their action figures”. Really? Funny.  I don’t see any kids trying to go out fight crime, become a ninja or waste time waiting for their parents’ car to turn into a robot.

Get real. This is same mindset that blames video games and cartoons for violent behaviors. So should we get Toys R Us to remove ALL the violent video games they sell?

Here’s even more stupidity, to go along with all this. The way Schrivjer talks, you’d think that Toys R Us is the manufacturer. They aren’t. They’re just the retailer.  The manufacturer of the Breaking Bad figures is a toy company called Mezco. Please get your facts straight before you trying saving the world. And not one news outlet mentioned Mezco as the manufacturer either.

The Breaking Bad action figures are clearly labeled as “15+”. That means, it’s for ages 15 and up. They are also located in the Adult Collector section of Toys R Us, despite what else you might hear. That means they are surround by other licenses like Nightmare on Elm Street, The Walking Dead, The Hunger Games, and other adult friendly toy lines. 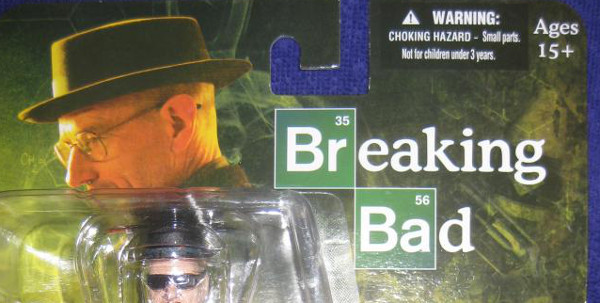 This is just a form of censorship. Now, I’m not saying Schrivjer doesn’t have a right to speak up about what she thinks. However, she doesn’t have the right to infringe on my rights (or yours).  And that includes pressuring a retailer to remove an item from the store, that is labelled and sectioned off accordingly, just because she doesn’t want to actually act like a parent.

For the hell of it, I decided to take a look at the Toys R Us website. And surprise, surprise…no Breaking Bad action figures were on the site. They weren’t just “not available”, they were completely gone from the site.  So, I decided to use the chat function to talk to a rep. This is the transcript of the conversation:

TRU Rep: Hi – thanks for chatting with the ‘R Us Family!  I’m your ‘R Us Web Specialist.  How can I help you today?

TRU Rep: How are you this morning?

Me: I’m trying to find a toy that was on your site the other day, but now is completely missing

TRU Rep: Are you looking for Breaking Bad?

TRU Rep:  That was a limited promotion. At this time we are sold out on line and most of the stores are also sold out. Would you like the manufacturer website?

Me: no thank you.

TRU Rep: You have a great day.

TRU Rep: It’s been my pleasure to chat with you today. If there is nothing further I can assist you with please click the “End Chat” button in the top right corner of your chat box and complete the short survey regarding your experience here with me today.  Thank you again for chatting with ‘R Us, have a great day!

You can tell a couple of things from this conversation. First, I was pretty much dissed and dismissed.  Ouch!  Second, seeing how they mentioned Breaking Bad and I didn’t, they’ve been dealing with this a lot since this furor broke out.

And what’s with all this nonsense of “limited promotion”?!?!? This wasn’t a promotion at all. It was a full product run, nothing limited about it at all.

But, what really worries me is what will be next if Schrivjer gets away with this nonsense…NECA? Diamond Select? McFarlane Toys?

And Breaking Bad star Bryan Cranston’s view on all of this? 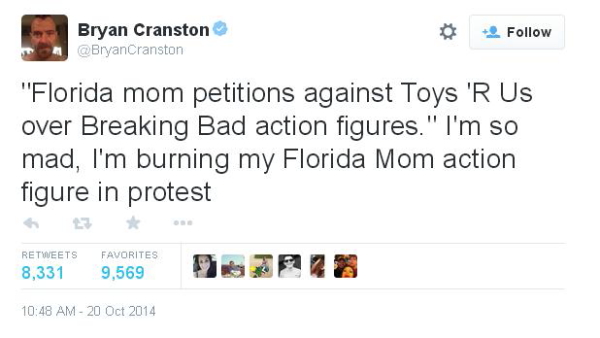 Got to love Cranston right now!

So if you’re against this nonsense, please sign the petition on Change.org to stop Toys R Us from removing the Breaking Bad toys.

Both Toys R Us and Mezco declined to comment at the time this article was written.