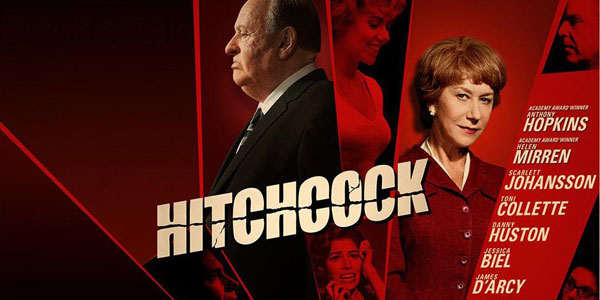 Hitchcock is less a biopic than a strangely sweet portrait of a gifted and complicated artist in his prime, and the critical importance of his one, true muse.

I wasn’t sure exactly what to expect walking in to Hitchcock.  Anthony Hopkins is certainly a talented actor, and he’s been keen on playing the obsessive compulsive director for years.  Despite this tenacity on Hopkins’ part, Hitchcock is certainly not interested in standing its subject on an unreachable pedestal.  It’s also not a biopic, really– much like Spielberg’s Lincoln this movie instead focuses on one small window of time, in what is considered by many to be the height of Hitchcock’s long and celebrated career, as he comes off the massive success of North By Northwest and searches for his next controversial topic, which winds up being Psycho.

Alfred Hitchcock was a strange man, filled with various neuroses, phobias and obsessive habits, often revolving around his fixation on his cinematic leading ladies.  These quirks are all blissfully on display here, however the heart of the story revolves not around Janet Leigh and Vera Miles, but the director’s wife and (mostly) silent partner, Alma Reville.  Their relationship is odd and often strained, and it’s painted in a wonderfully rounded and realistic light– Alma cares deeply for Hitch, and can usually tolerate his idiosyncracies.  She is one of the few to support the director as he becomes increasingly hellbent on adapting Psycho, the book he reads which makes him fixate on Ed Gein (who, in the film, becomes Alfred’s new imaginary friend), and the grisly murders Gein, and the fictitious Norman Bates, committed.

Hitchcock’s enthusiasm for the subject matter is not shared by his producers, leading he and Alma to fund the project independently, working with a cast and crew more confused than intrigued that the celebrated artist would commit to a project as base as a horror film.  The steps leading to the making of Psycho are pitch perfect in this film– aside from the lack of interest shared by many involved, the entire production was plagued with many issues behind the scenes, both on set and off.

It’s the off-set problems that really give Hitchcock its heart, as Alma is pushed beyond her limits dealing with the multiple spinning plates of obsession her husband juggles.  She’s tired of being exclusively in his shadow, and begins to once again branch out on her own, something Hitchcock at first willfully ignores, and ultimately grows to resent.  Of course, we know how this ends– Hitchcock finishes his movie, and proves the suits wrong as it becomes one of the most wildly successful and critically acclaimed films of his career.  The film posits Alma is the one who saves Psycho— it’s a trainwreck of footage as the increasingly unbalanced Hitchcock continues to fixate on her fictitious affair with hack screenwriter Whitfield Cook and his own muddled and conflicted feelings toward Janet and Vera, his two stars– and in the context of the film this works brilliantly.

Ultimately, Hitchcock is Alma’s story, even moreso than Alfred’s.  Hitch may be the one given accolades as the initial screenings of Psycho are met with wild fanfare, but in the end he realizes he is nothing without his better half… as an artist, or as a man.  It’s sweet and offbeat and quite romantic, actually, and the storied chemistry between Hopkins and Helen Mirren as Alma is phenomenal.  Under his makeup and fatsuit, with the director’s signature snarled lip on his face, Hopkins is quite good as Hitchcock, but Mirren is even more incredible as the strong yet vulnerable Alma.  This is a patient woman, one who cares so deeply for, and respects the talents of Hitchcock she is willing to suffer his often strange and erratic habits, and does so with a layer of compassion that is admirable.  But Alma is also a woman of great skill, an accomplished screenwriter and producer in her own right, whose talents are taken for granted by Hitch after so many years.  Mirren sells the frustration of her character from start to finish, and the success of Psycho feels like a victory she earns every bit as much as Hitch.  The fact that he realizes it, too, ties the personal and professional storylines together wonderfully.

The rest of the cast is great as well, from Michael Stuhlbarg’s shrewd agent Lew Wasserman to Scarlet Johansson and Jessica Biel as Leigh and Miles, each offering a different kind of soundboard for the troubled director– in Janet, he has hat he considers a budding romance, as he enjoys the simple kindness she shows him.  Vera, Hitch’s former favorite actress, is presented by Hitch himself as a villain, but Biel’s candid, honest performance quickly reveals there’s no cruelty in the actress’ actions– he “betrayal” of Hitchcock was all in the director’s mind, as Vera set aside a life as “the next Grace Kelly” that was more Hitchcock’s dream for her than her own.

I guess any movie about a character as unique as Alfred Hitchcock would have to be a bit left of center, but the quirkiness of Hitchcock is perfect, never moving over the top into camp, but always keeping a sense of whimsy about it.  In that respect, this movie feels like a cinmeatic soulmate to Tim Burton’s Ed Wood, and in fact to any of Burton’s earlier, more personally-charged films (the excellent score by Danny Elfman certainly doesn’t harm this comparison, either).  Like many of Burton’s greatest stories, Hitchcock features compelling leads who are simultaneously too strange, and too talented to fit into society.  There’s an oddball charm to every moment of this movie, and both the fascinating look behind the scenes of Psycho, and the chronicle of Hitch and Alma re-discovering their love for one another are woven together into one of the more offbeat and heartwarming love stories I’ve seen this year.