The Hobbit: Battle of Five Armies Gets an EPIC Banner 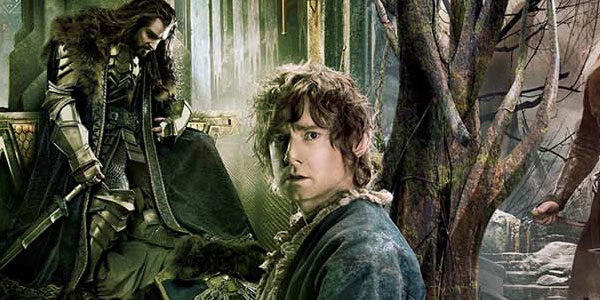 This weird thing happens every year… there comes a point when my general indifference for Peter Jackson’s latest Hobbit movie gives way to some misguided anticipation for the next chapter.  It’s never what you’d expect– over the past three years I’ve been fairly committed to making fun of self-serious trailers and poster campaigns as bloated as the movies themselves– but dammit, there’s always that something that reels me back in.

Here we are in September, just a few short months until The Battle of the Five Armies hits, and I really thought I’d be seeing this final movie entirely as a chore, but this new banner style mega-poster completely suckered me back in.  It’s an assemblage of scenes we’re going to see, but each one is crafted to remind us of better, more compelling moments from the Lord of the Rings trilogy.  The dwarf destiny stuff that took up 85% of The Desolation of Smaug never really connected with me, and yet seeing Thorin and his allies looking contemplative, decked in battle armor that suggests they just raided the husky children section of Rohan’s armor store actually makes me smile.

And seeing Bilbo standing front and center, determined yet confused (possibly plotting how to regain control of the movie series that bears his name?) is refreshing.  Say what you will about the rest of the movies, Peter Jackson certainly knows how to build epic combat sequences, so I’m sure the actual Battle of the Five Armies will be a show-stopper to witness, even if it lacks the thematic urgency and character driven relevance of the Battle of Black Gate.

So yea, maybe this poster alone isn’t enough to ramp me up to the point where I’m totally excited to see this final chapter of the Hobbit trilogy, but it now officially looks fun enough to not want to NOT see it.  I’ll give you the win on that one, PJ.