Movie Review: The Hobbit: Battle Of Five Armies– It Is What It Is 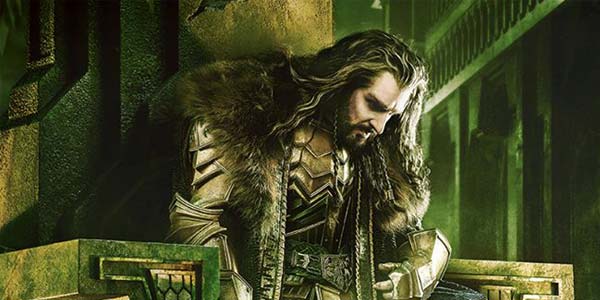 The new Middle Earth trilogy comes to the ending we all expected, for better or worse.

Before my screening of The Hobbit: Battle of the Five Armies began, I noticed a little girl near the front, brimming with excitement over what she was about to see.  Even five or six rows back from where she was sitting, her energy and enthusiasm was palpable, and it felt really nice to watch her genuine happiness over what we were about to experience on the big screen.  And as the movie played out, nothing– not my own cynical and snarky attitude toward the bloated, manufactured epic, nor any of Peter Jackson’s pomp and illogical set pieces and flimsy connective tissue linking this film to the vastly superior Lord of the Rings trilogy– seemed to shake her joy.  So, at the risk of sounding like a creeper, I actually spent a good amount of the screening watching that little girl, and her reaction to what was happening.  It reminded me that, despite the lavish production Jackson and his team had built to blow up the tale of Bilbo Baggins, this is still, at its core, a children’s story, and I loved that at least for that little girl, it really connected.

That was far and away the best part of my two and a half hour experience with The Battle of the Five Armies, a film that’s every bit as messy and meandering and unfocused as its predecessor.  I can’t say with confidence I will ever actually sit down and watch this film again, but that doesn’t mean I hated it.  It’s simply the end result of everything Jackson has become as a director, making a movie that– as that little girl reminded me– isn’t really for me, at all.

When it comes to the story of The Hobbit, we get every beat we still needed.  We start with Smaug’s attack on Lake Town, his death at the hands (er, arrow) of Bard… We see Thorin claim his throne, only to fall ill with Dragon Sickness, consumed by greed giving way to madness, as friends and foes alike commiserate at the foot of the Lonely Mountain in what will become the movie’s titular battle.  We watch as Bilbo selflessly attempts to diffuse the pending conflict at every turn, even as the swords, shields and axes begin to clash, and we follow both our Hobbit hero and Bard and Gandalf and Thranduil in the conflict.  And in the eleventh hour, we see Thorin’s change of heart, as he and his until now affectless dwarves finally join the war they started.

In between these story beats, Jackson wanders around with other extraneous characters, set pieces and plot points, spending a downright weird amount of time with Ryan Gage’s weaselly Alfrid, some shoehorned hero moments for Legolas to prove he is still the master of pixelated stunt work, and a few truly groan-worthy attempts to tie this trilogy more intimately to the Lord of the Rings saga.  Like the other Hobbit movies, at least half of this film is literally just fluff, and the core story would suffer nothing were it to be cut out entirely.

Production-wise, this movie is a big step up from the previous chapter.  There’s nothing as glaringly bad looking as the CGI barrel chase… although nothing is quite as stunning as Bilbo’s encounter with Smaug, either.  The actual battle is good enough– it’s easy to follow, often weaving between multiple smaller sequences taking place concurrently, and the steady influx of new waves of armies prevents things from ever feeling overly stale.  That being said, there’s something too familiar about this war… we’ve already seen PJ’s take on epic Middle Earth combat in the Helm’s Deep and Black Gate battles, but both of those sequences were very grounded in the larger themes of the story, and tied closely to our characters’ internal struggles.  The Battle of the Black Gate– for all its epic scale and kewlness– was really nothing more than a diversion, a way to distract Sauron from the real heroes and their true mission, as Sam and Frodo finally make it to the heart of Mount Doom.

Here, the battle itself is the star, with occasional character moments peppered on top to remind us of who each individual is– Bilbo is brave and virtuous!  Thorin is mad with greed!– but the sprawling action is happening independently of these characters’ arcs, not in tandem with or because of them.

The production value is really nice to look at, and in many ways this movie certainly looks the most similar to the Lord of the Rings aesthetic, with the massive armies of men, elves and beasts, cool armor and weaponry, and our best look yet at the remarkable architecture that houses the dwarves’ lost kingdom inside the mountain.  From a purely visual standpoint, the set designs in this film are a marvel to behold… even when they are ruined by absolute cornball action, like watching Saruman lay down some Middle Earth kung-fu on the invading ghosts of the Nine Kings (no, seriously, it happens).

That’s just one example of the silliness Jackson inserts into the movie, in a way that seems anything but self aware.  Many of us have scoffed at the dumb CGI stunt work Legolas has done in his previous appearances, but now we have multiple characters doing the same sort of absurd, gravity and logic-defying stunt work, and the cheese gets laid on so thick it compromised even the very well rendered and thoughtful design aesthetic.

I don’t think it’s really possible to adapt The Hobbit book into a sweeping, nine hour epic… it’s just not that kind of story.  Tolkien’s own writing was drastically different when comparing Hobbit and his Rings trilogy, so the attempts to unite them, both thematically and through binding as many characters together as possible, flat out fails in this movie.  The stakes feel so much smaller here, and the characters’ motivations muddier– Thorin’s arc plays out with no real sense of logic or consequence, making his eventual redemption feel mostly unearned.  And yet, we’re required to simply accept it and root for him in his way-too-long fight with that one evil CGI orc.  If this were a less huge movie, the smaller stakes could work, but c’mon… we’ve got nine plus hours of run time, and Thorin’s redemption feels rushed?  How does that happen?

If I sound overly negative and critical about this movie, I’m sorry, because I really don’t mean to be.  I don’t hate this movie, or this trilogy, nor do I harbor any ill will against Jackson for what he has made here.  And I truly still believe– like I said after I saw both previous movies– that one day sooner than later, some enterprising fan with lots of talent and even more free time will create a fan edit of this trilogy, boiling it down into one tight and really, really good three hour movie that deserves to stand shoulder to shoulder with the Lord of the Rings series.

But in the meantime, what we’ve got is a lot of self indulgent padding, and an amateurish lack of priority on what characters and scenes and set pieces are worth focusing on.  I credit Jackson for giving Martin Freeman’s Bilbo a lot more screen time in this final chapter– and Freeman makes the most of all of it, proving once again he is the perfect actor to bring the Hobbit to life– but so much of what we get here is just too sloppy and haphazard to really get behind.

The Hobbit just isn’t for me, and I guess that’s okay.  It’s apparently for that little girl who loved every second of the movie.  It won’t be for her forever either, though, and I guess that’s okay, too?  I made my peace with what this trilogy is long before I stepped into the theater, and I accepted who Peter Jackson has become as a filmmaker.  That he didn’t prove me wrong isn’t something to hold against him.  It simply is what it is.