The Hobbit: Battle Of Five Armies Gets One Last Trailer 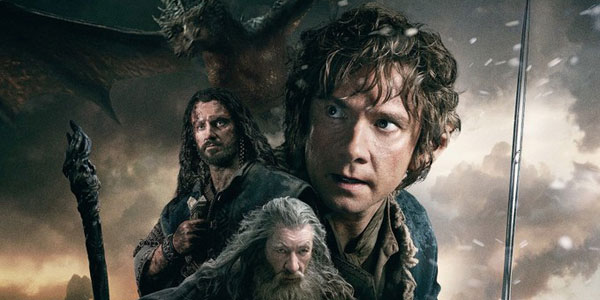 …then we can all stop.  All of this Hobbit stuff over the past three years has just felt like the most vicious of cycles… we all make the same jokes about how bloated these three 3-hours movies based on a hundred page book are… we all snidely remark how our Hobbit hero Bilbo, has been criminally sidelined in the trilogy of films bearing his own name… then the next trailer comes out and all that cynicism washes away because this next one looks SO VERY EPIC, we feel justified in heightening our expectations and hoping our next venture back into Middle Earth will feel like it did back in 2002.

Then we see the movie itself each December, and while it’s not unwatchably bad, it reminds us that maybe even if we all ARE cynical jerks, there is just cause.  Because the new movies Peter Jackson is making really ARE bloated, and they really DO sideline poor Bilbo (still brilliantly played by Martin Freeman, who does so very much good with his brutally limited screen time).

But all things must end, even our increasingly complicated relationship with PJ’s once-golden vision of Middle Earth.  And I feel a little savvier to the cycle this time… while once my expectations would be tempered to such a degree Sauron could easily forge the One Ring within my excitement, I now feel much more grounded in what to expect from The Battle of the Five Armies.  It simply is what it is, and then it will be over.

All that said, it does look pretty damn epic.  I’ll see you there opening night.