The Hobbit Comes So Close To Being Great 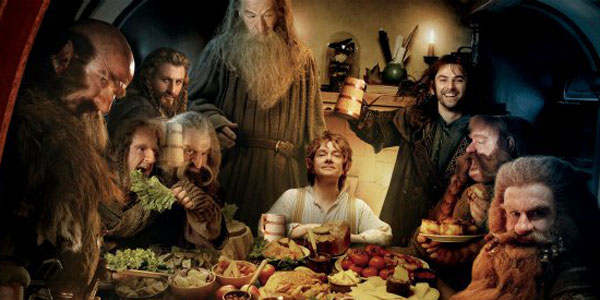 Peter Jackson’s long-anticipated return to Middle Earth is not without its faults, but overall feel like a journey worth taking.

I had my doubts going in to The Hobbit: An Unexpected Journey (and, really, about Peter Jackson’s entire Hobbit trilogy).  It seemed like the concept of stretching a barely 300-page book into three 180+ minute epics would lend itself to lots of embellishments and indulgent filler, something Jackson has become notorious for in his post-Lord of the Rings career.  And yes, there’s a lot of that going on in part one of The Hobbit trilogy, but not in the way I expected, exactly.

An Unexpected Journey actually stays very faithful to Tolkien’s original story, and the new elements added in, often used as connective tissue to bond this new trilogy to PJ’s previous cinematic masterpiece, The Lord of the Rings, works surprisingly well.  I think this success mostly comes from the sense of homey wonder created simply by seeing these fantastic places and wonderful characters again.  Everything on display has a genuine sense of nostalgia– each cameo feels natural and welcome and not the least bit shoehorned… Gazing upon a map, packed with familiar locations at the opening of the movie, seeing Rivendell once more, and even the swells of the beautiful score by Howard Shore– it feels good to be back in Middle Earth, and that warmth of nostalgia applies brilliantly to The Hobbit, with its charmingly silly, less serious tone.

That silliness worked perfectly, from the singing to the various antics– and even body humor– of the surly Dwarf company of 13.  There’s an innocence to this calm before the storm, even as we see the darkness creeping around the edges, which will become the rise of Sauron and the dark events that lead to the Fellowship’s formations decades later.

Anchoring the cast are three main roles, one familiar and two new, all of whom succeed.  Ian McKellen’s Gandalf the Grey is every bit as fantastic here as he was in Fellowship, and it’s obvious the accomplished actor revels in playing the part.  There’s a dashing mischief in the way Gandalf approaches things, and I loved watching him use this rascally charm to mask his more grave motivations, as he grows increasingly concerned about the Necromancer and the possibility that this dark force could ally itself with Smaug the dragon in the Lonely Mountain.

Richard Armitage does admirable work as Thorin Oakenshield, the hot-headed leader of the Company of Thirteen.  Thorin is a mighty warrior, whose appearance makes him seem cut from the same cloth as Viggo Mortensen’s Aragorn, but the exiled dwarf prince stays grounded as his own unique character, not “Aragorn lite.”  Part of that is the dwarf’s notorious temper, which is definitely on display here. Whether it’s his verbal berating of Bilbo or his brash charges into battle, the bull-headed, leaping before looking attitude Armitage channels is perfect for Thorin.  The dwarf prince gets some personal gravitas in addition to the quest to reclaim the dwarves’ home, thanks to a new villain imported into the story, a great, white Orc called Azog.  Azog and Thorin have a mutual bad history, and the albino Orc is painted as a rather formidable challenge for the dwarf warrior.

But it’s Bilbo Baggins who makes the movie, and I’m very glad that Martin Freeman’s take on the Hobbit is perfection.  Bilbo is an interesting character, much more of a homebody than his young cousin Frodo, more interested in his collection of decorative plates than adventures beyond the lazy Shire.  When Gandalf attempts to recruit him as the burglar of the Company, no one really understands why, especially the mostly disinterested Bilbo.  As such, Bilbo’s journey gives him the most clearly defined character arc in the film, and Freeman is phenomenal every step of the way, as the Hobbit evolves from trepidaceous participant to self-doubting ally, to selfless hero.  And he’s never better at selling all these characteristics than the riddle game, when he encounters Gollum.  It’s a thrill just to see such an iconic scene on the big screen, and it’s pitch perfect from start to finish, so much so that it transcends the distracting effects that plague much of the film.

As I said earlier, despite all the good of The Hobbit, there’s more than a few flaws as well, many of which are technical more than story-driven.  The effects work is all over the place in this latest visit to Middle Earth.  When they’re on, they’re on– scenes such as the Lonely Mountain of yesteryear (seen in flashbacks), and the goblin kingdom are astonishing to behold, becoming impossible to discern practical setpieces from CGI landscape.  And Gollum– first and still one of the most successful motion capture creatures ever put to film– looks even better with another decade of tech and experience under the belts of the team at WETA.

However, the effects that miss, are off target just as dramatically, leading to unintentionally silly sequences like the rock giant combat which are more jarring than immersive.  This is also a problem in regards to PJ’s new baby, the 48 fps camera.  Moving at 48 frames per second gives much of the footage a “live” feel, in the worst way possible, and very much not film-like.  Makeup effects and soft CG that would look fine using standard film techniques end up cheap and obvious, and the frame speed has other jarring side effects such as an occasional acceleration of movement that makes what’s on screen look more like a Benny Hill episode than an epic blockbuster  The existence of this new technology causes some sacrifices to the content on display, as well.  Unlike the orcs of LOTR, Azog is an entirely CG creation, which I can only assume was done to side-step makeup looking bad in 48 fps.  While he and his minions still look good, they’re obviously CG, which bummed me out after the history of amazing, practical makeup and costume work we saw in the previous films.

The 3D does little to add to the experience of this film, and the 48 fps flat out pulled me out of the story time and time again.  It wouldn’t be so bad, but the story itself, and the nostalgia I felt at a return to this wonderful cinematic world made me desperately want to stay in the fantasy– instead the camera tricks and technology overpowered my own imagination, leading to a frustrating see-saw effect.

I was hesitant walking in to The Hobbit, and truth be told, this first installment didn’t settle my concerns completely– while I really liked what I saw, there is definitely quite a bit of filler in this movie, although it was less a case of extraneous scenes than ones that went on just a bit too long.  If each major sequence of the film could be trimmed to half its length, the overall story would still make total sense, and we’d have a very tight, sharp two hour picture instead of an often sloggy three hour one.  And with the first movie ending with the company within sight of the mountain and Smaug opening his eyes, I can’t for the life of me figure out how there’s still two movies’ worth of stuff still to come.

An Unexpected Journey was a far better movie than I expected.  While some of the problems I feared are certainly present, from the indulgent expanses to this simple story to the irrelevant and grating “next level” technology, the warmth and characters and nostalgia of this amazing universe still managed to pull me in.  I just wish it had pulled me in for the entire length of the film, without the constant intrusion of buggy camera tics and shoddy effects.  What was on screen was engaging enough that every time I fell off, it sucked me right back in, but this back and forth made for an exhausting, and somewhat compromised experience.  If Jackson and crew had just relied on the compelling tale they had to tell– instead of obsessing over the new toys they were using to tell that story, The Hobbit could have been great.  As it is, the quality of the source material, the pedigree of the actors and the fantastical, immersive feeling of this amazing Middle Earth was still enough to make the movie– and its two sequels– worth revisiting.