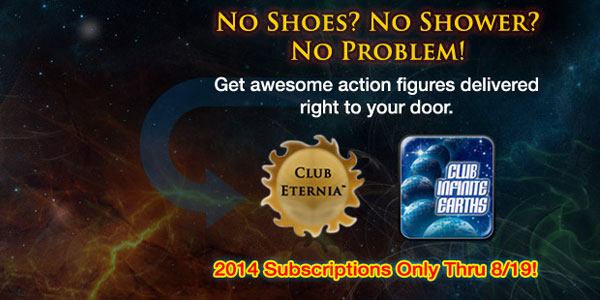 Didn’t we just do this last year?

There’s been a weird sense of deja vu for the past few years when it comes to Mattel’s subscription solicit window. More and more collectors are seemingly waiting until the last minute to sign up for the next year’s subscription series, and I honestly can’t really blame them. or some people, it’s practical– Whether you attend or not, if you collect action figures you’re probably recovering from spending WAY too much money on Comic Con exclusives. Plus, this time of year is when all the Fall toy lines hit retail, beginning the ever-lengthening Christmas cycle at retail. So there’s a lot of competition for dollars in late July and early August.

Of course, some folks wait to make Matty Collector’s team sweat. Toy Guru and his crew always get much more open and honest, and less callous during the sub solicit period… and I love when they actually present themselves as reasonable and in-touch marketers of their products. But as customers, at the end of the day we really are limited only to a vote with our wallets– Yes, 2014 looks like an amazing year for both Masters of the Universe and DC Universe, based off what we’ve seen right now. But both lines come with years of baggage at this point, as we all pile onto increasingly large discard bin of unwanted MOTU and DC characters, and try very hard not to think of how much money we wasted on them, just to guarantee we could get the Ram-Mans and Wally Wests.

Toy collecting is a great hobby, so I try not to get too cynical and bitter about anything. Even a company with a customer service track record as spotty as Mattel’s, I tend to forgive, since, really, it’s all just toys. And much like the douchebag musician who’s a total wretch in real life, but makes great music– I feel that toys and toymakers can be mutually exclusive, too. Modulok and Doomsday and 90s Aquaman and Hydron are rad looking figures, and I like them enough to jump in to both subs for another year, hoping that Mattel’s recent transparency with fans will hold true in their promise to deliver only figures that people really want in the lines.

If my argument isn’t enough to motivate you to decide one way or the other on Mattel’s 2014 subs, below is what the Four Horsemen had to say, posted on their website:

If you know who we are then you probably know about Mattel’s action figure lines – Masters of the Universe Classics and DC Universe Classics, and you probably also know about our involvement with both of those properties. Both lines are very near and dear to our hearts as fans and we always try to remember how very blessed we are to have the opportunity to work on both of them.

So, if you know who we are and you know about MotU Classics and DCU Classics, then you probably know what this message is going to be about. Both lines are in danger of ending prematurely and they need your help to continue. We’re not going to beg you to buy multiple subscriptions or try to convince you that getting a subscription to either or both of these lines is more important than paying your rent or putting gas in your car. Those of you who have followed us for a while know that we’ve never been like that, and that if anything we’re going to do what is natural to us and come at this from a fan’s point of view.

First and foremost, there have been rumors floating about that this is some sort of scare tactic by Mattel just to sell more subscriptions than they really need and that the charts on MattyCollector.com are faked. These rumors could not be farther from the truth. What’s going on is that Mattel is being completely transparent about the subscriptions that have been sold so far and they’re letting you in on it just so you’ll be aware of the progress and consequently how much danger these lines are really facing of being ended. We’re actually floored that the MotU Classics subscription is only up to 35% at the time of this writing and the DCU subscription is only at about 20%!

From a fans perspective we see it like this…

With the DCU line there are still opportunities for all of us to finish off some hero and villain teams that we’ve all have wanted for a while and also to get characters that really need an update and an upgrade from earlier versions that were done of them, like Superman’s nemesis – Doomsday!

As for MotU Classics, there are still lots of fairly top tier characters that are from the original toy lines and cartoons that have yet to become part of the MotU Classics universe. Plus there are many fan-favorite secondary characters that may never see the light of day if the subscription campaign isn’t successful. Characters like Tongue Lashor, Rio Blast, Extendar, Squeeze, Ninjor, Dragstor, Sssqueeze, Flutterina, Angella, Blade, Entrapta, Saurod, New Adventures Skeletor, Evil Seed, Sweet Bee, Double Trouble, Flogg, Mermista, and yes – even Madame Razz and Gwildor ALL need to be made! It’s just plain and simple – without the subscriptions these figures just have no chance of ever happening.

So, it’s not a scam or a scare tactic. It’s just fact. Both of these iconic, history making toy lines are in danger of being cancelled and the only way we can all make sure this doesn’t happen is to subscribe to Club Eternia for Masters of the Universe Classics figures and to Club Infinite Earths for DC Universe figures before Monday August 19th 2013 to help ensure that these two truly classic lines stick around for a little while longer.

That’s less than two weeks before the fate of these two heroic lines will be decided. This time you truly DO have the power! To go directly to the MattyCollector.com subscriptions page, just click HERE.