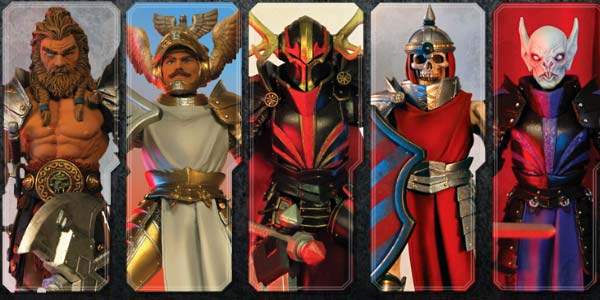 Get your first look at the Four Horsemen’s Mythic Legions!

The Four Horsemen have launched a website for their new fantasy based Mythic Legions toy collection.  The original property made its debut at Toy Fair last February, and now the Horsemen have opened up this new universe with a rundown of characters, new photos of the figures and more.

Like many a good Dungeons and Dragons-ish fantasy, Mythic Legions is composed of knights and orcs and dwarves and skeletons, allowing the Horsemen to flex their sculpting muscles as well as their keen sense for toy design with alternate colorways and shared parts to offer a wider variety of characters than we might have expected from the start.

The figures will be about 4″ tall and are based on the Glyos system, just like this year’s Power Lords.  This means they will be easily customizable thanks to swappable parts, and the various armors and robes on these guys should make it very easy to mix and match to make some cool custom figures.

While nothing is official yet, there was a rumor at Toy Fair that this series would debut as a Kickstarter campaign, likely running in early 2015. Either way, we should see the first figures in this line hit sometime next year, and I am eager to check them out!  You can see them for yourself HERE.