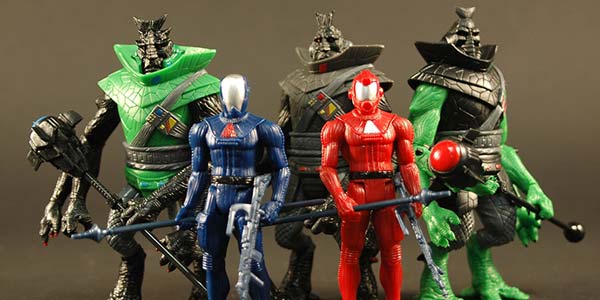 The Four Horsemen’s Toypocalypse show in New York showed off a lot of their exciting upcoming figures, and many of them are going for sale this Friday!  3pm EST will be our first chance to purchase the latest Power Soldiers and Ggrapptikk variants, as well as a limited supply of the Barlowe edition Gripptogg, who was only available at the Horsemen’s art show earlier this month.

The final waves of Outer Space Men are almost ready, so the Horsemen will open them up for preorder on Friday, as well.  And if you’re missing any older Horsemen releases– such as rare variants from their Seventh Kingdom series– many figures with non-mint packaging from the Horsemen’s warehouse will also be up for sale at the great price of only $8 each.

I’ve got my eye on those Seventh Kingdom mutants, so do me a favor and don’t order any until I do, okay?

Here’s all the details, straight from Source Horsemen:

This Friday we’re going to launch our biggest sale ever at Store Horsemen! SALE BEGINS ON 2/28/2014 at 3pm est

We recently had our 4th annual gallery show, Toypocalypse 4: FanEXtasy, at TT Underground gallery in NYC, and while there we sold the Power Lords: Barlowe Concept Color Ggripptogg figure to a lucky few. Those all sold out but this is a shared exclusive so we will have them on Store Horsemen for sale as well. Like all Power Lords releases through Store Horsemen, these items will be available to eligible Power Lords Fan Club members only during the first 48 hours and then will be released for sale to the general public if any remain. These are an extremely limited item so the price is a little higher than normal at $25 each plus shipping & handling and they will be limited to one per customer in the first 48 hours.

Last, two new Ggripptogg variants are being released. one is the Ggrapptikk Grunt who is very similar to the Ggrapptikk Grunts that were previously released, except this time they’re sporting a really striking and ominous black & green color scheme. The other release is the Ggrapptikk Sergeant! This is the first time this variant leader head has been released for a Ggripptogg variant figure so we expect it to move quickly. Each of these figures will be available for $15.00 each (plus shipping & handling).

All of the Power Lords items mentioned above are currently in stock and will begin shipping immediately after orders are placed and processed. Power Lords Fan Club members who have not yet gotten their fan club number via email yet will be receiving those this week.

The Infinity Edition versions of some of the most highly anticipated Outer Space Men characters we’ve done to date will be arriving in our warehouse in a couple short weeks, so we’re going to include a pre-order for them as part of this big sale event. Included in this pre-order will be Gamma X, Terra Firma, Jack Asteroid, Ohpromatem, Horroscope, and of course Colossus Rex! Each of these are the fully painted and blister carded versions fans have been asking about for a while now.

These will be pre-orders and any items ordered along with these will be shipped when the pre-ordered Infinity Edition Outer Space Men figures arrive in our warehouse.

We’re cleaning out our warehouse and we’re getting rid of LOTS of already sold out and highly sought after items for crazy low prices! The reasons for these crazy low prices? The packaging is beat to crap and many of the items don’t even have backer cards anymore, but the figures in the blisters are still in great shape, so if you’re a figure opener this sale is FOR YOU!

There are lots of Seventh Kingdom variant characters to choose from but there are only a few of each! Each for ONLY $8.00 (plus shipping & handling). We only have a few of each of these in stock and they’ll probably go fast so get in there and get yours quickly. If any orders are accidentally placed over the actual amount in stock, unfortunately those orders will have to be cancelled.

More of this “scratch & dent” stuff will be going up for sale in the next couple months so be sure to keep your eyes peeled for that announcement.