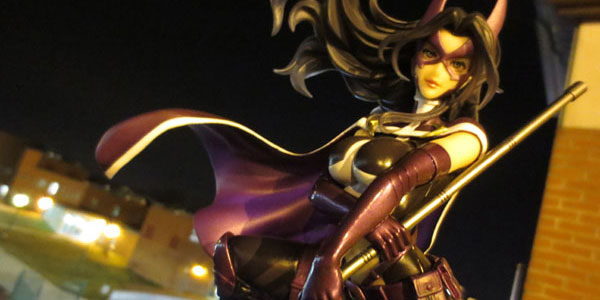 Huntress is the latest DC Super Heroine to get the Bishoujo treatment courtesy of Kotobukiya.

If you’ve been following this site, you probably know I really dig Kotobukiya’s DC Bishoujo Collection.  The sexy, Japanese influence on DC’s classic super heroes has lent itself brilliantly to some wonderful designs courtesy of master illustrator Shunya Yamashita, and Kotobukiya’s impeccable sculptors and designers expertly bring each of those designs to life. 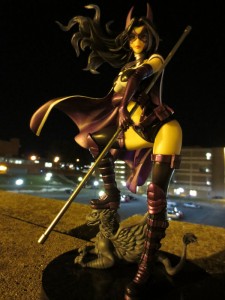 The latest addition to the Collection is The Huntress, who not only stands as another great Bishoujo piece, but– following up on Batgirl, Poison Ivy, Harley Quinn and Catwoman– rounds out the Batman corner of the DC Universe nicely.

The Huntress is depicted in a nice, character-appropriate pose, as she clutches her staff in both hands while resting a foot on top of a gargoyle.  She’s a bit more slim and defined than her fellow heroines and villains, but it makes sense for the lithe Gotham defender, and both her proportions and the fluid sense of motion sculpted into her flowing hair and billowing cape make for another fantastic overall statue.

Kotobukiya wisely opted for the modern/ Jim Lee costume for Huntress, and as such no liberties had to be taken with conveying her outfit into the Bishoujo aesthetic, from the bare legs to the keyhole abdomen, this statue nails every inch of the silly, sexy Jim Lee costume design.  The outfit also lends itself to let Kotobukiya shine on the details– Huntress is loaded with straps, belts, pouches and bits of armor that really enhance her overall look and each is portrayed brilliantly in this sculpt.  And of course, Huntress’ face is fantastic, with a confident and determined semi-smile beneath her horned mask. 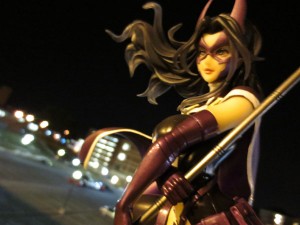 Like some other Bishoujo, Huntress’ accessory, the staff, comes separate in the box and must be put in place after opening.  This is a bit of a challenge as the staff is VERY thin and VERY firm plastic, making it susceptible to breaking.  This is confounded by the position of the hero’s right hand, which is both very close to the body (offering little leeway) and (at least on my statue) not cut to the same width as the staff– my figure’s staff literally could not go through the hole in her hand.  Since the figure is vinyl, it’s possible to VERY CAREFULLY heat her hand to soften it enough to fit the staff in.  I opted to take an X-Acto knife and trim a tiny bit of material around the edge of the hand hole. Sadly the material underneath is black and does not match her shiny purple gloves, but it did the trick, and the exposed black plastic is hidden by the weapon in her hand.

Each new entry in the DC Bishoujo Collection has felt like a step up from the previous, and while The Huntress may not be the best piece in the overall collection, her quality, design and coolness is right up there with other recent figures like Power Girl and Harley Quinn.  Huntress closes the book on the Bishoujo Bat-family in a nice way, and she fits in brilliantly with any DC Comics, Batman or Bishoujo display. 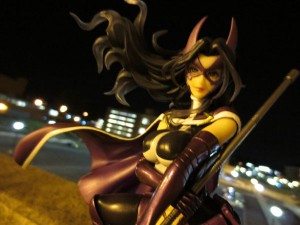 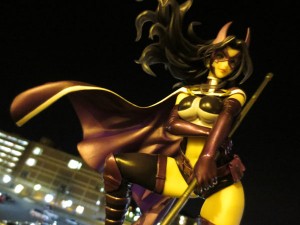 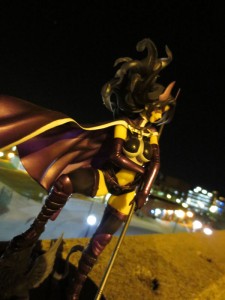 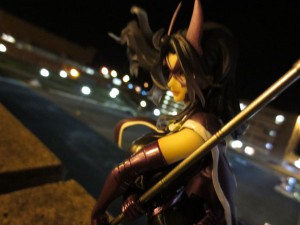 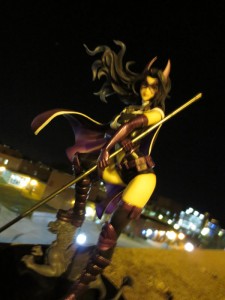 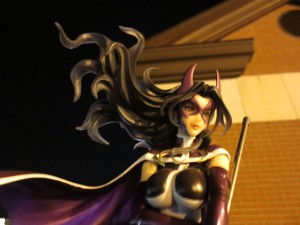 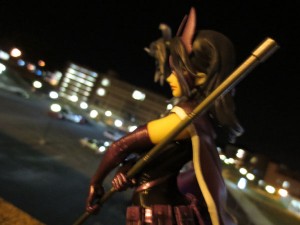 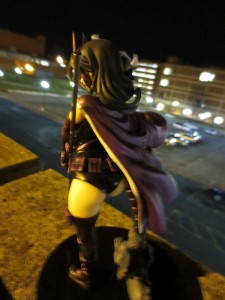 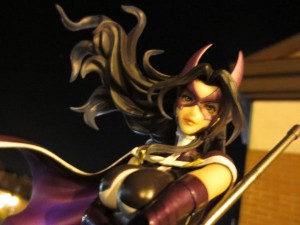 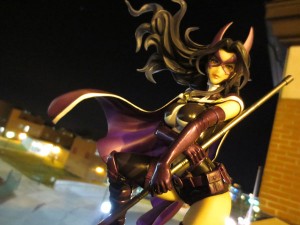 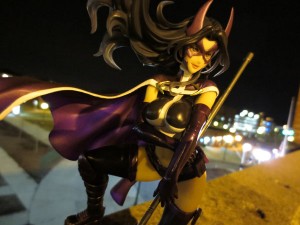 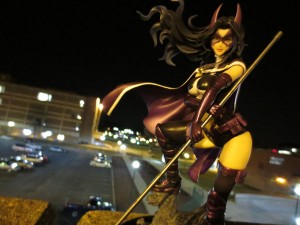