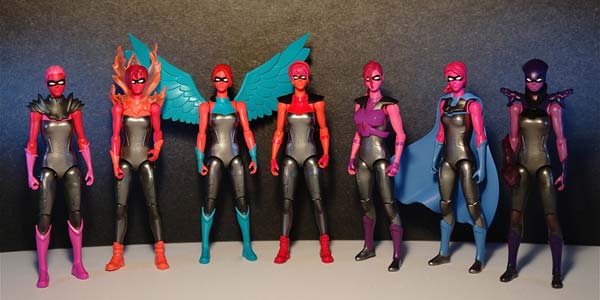 An new action figure project on Kickstarter focuses on all the right aspects of “girl power.”

I feel like we’re living in an exciting time for pop culture.  The boring, traditional gender barriers of the past are slowly (VERY slowly) fading away, opening up lots of potential for a more egalitarian landscape within movies and comics and games and toys.

We’re not there yet– and some areas of the wide world of geekdom are progressing much more dramatically than others– but it seems like every day the pop culture consciousness makes glacial moves toward a better tomorrow.  Marvel Studios’ cast of strong, independent female characters in their blockbusters is one of the things I love most about them.  There’s a few really strong female-fronted comic books out there, like Brain Azzarello’s Wonder Woman and G. Willow Wilson’s Ms. Marvel, which not only feel refreshingly progressive, but are a hell of a great read.

Action figures are, overall, one of the slower-advancing corners of the geek universe in regard to gender.  Most of the big toymakers still bow to the typical “toys for boys” and “toys for girls” model, in an effort to remain as mass appeal and inoffensive as possible to their more backward thinking consumers.  And while we’ve seen smaller toymakers use a much more gender balanced approach to their toy lines, the source material– whether it’s Princess Leia’s metal bikini or the typically skimpy super heroine spandex– still tend to promote unrealistic body images and an over-sexualization of their women.

Like I said, this is changing; as the source material for toy lines improves in regard to gender representation (both in quantity and quality), the collectibles that stem from them will change, too.  In the meantime, the rise of small, more thematically focused independent toymakers can also help change the conversation.  Take IAmElemental— this new project launched last week on Kickstarter, featuring a team of all new female super hero characters, all of whom feature more natural body types and less revealing– though still very well designed– costumes.

The figures will stand around 4″ tall, and include unique accessories for each character, which correspond to their thematic names and color designs.  Each figure is based on an element of courage, and I think they’re really cool!

Clearly I’m not alone– the project has over three weeks to go and they’ve already more than doubled their funding goal.  It’s always nice to see a great idea, well executed, and that’s exactly what Julie and Dawn from IAmElemental have done here.  To see such a strong crowd-funded response to it makes this all the more exciting.

You can see some images of the IAmElemental figures below, and you can read more– and contribute– HERE at their Kickstarter project page. 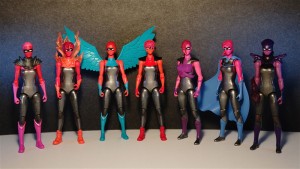 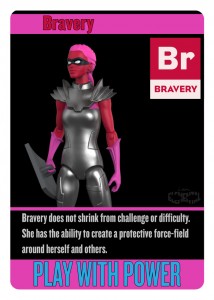 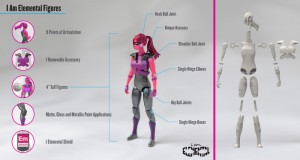 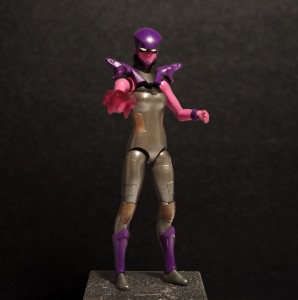 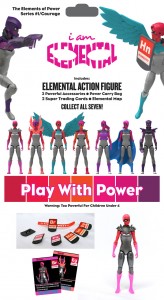