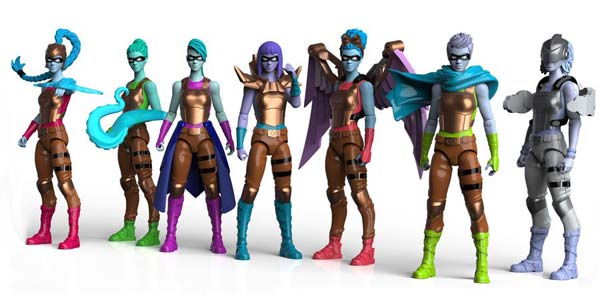 Series 2/Wisdom is a series of seven 4″ articulated action figures based on the “Elements of Power – superpowers that already exist inside each one of us,” said Julie Kerwin, IAmElemental’s Chief Elemental Officer.  “Our first figures, Series 1/Courage, were modeled on Joan of Arc.  The muse we chose for Series 2/Wisdom is Hypatia.  Daughter of the Greek scholar and mathematician Theon, she has been praised by Smithsonian magazine as ‘one of the last great thinkers of ancient Alexandria and one of the first women to study and teach mathematics, astronomy and philosophy.’  She was a STEM pioneer, writing about math, building astronomical instruments, and distilling complicated philosophical concepts into digestible bits that her students could process and understand.  Legend has it that she even drove her own chariot around Alexandria – unheard of at the time.”

Added Kerwin, “I love that Hypatia embodies the concept of a polymath: a great thinker; someone who knows a lot about a lot of different subjects.  I want every girl and boy who plays with the Wisdom series figures to not only have a lot of imaginative fun with them, but also to come away inspired to grow a powerful brain like Hypatia – to be curious and never stop learning.”

IAmElemental is now accepting pre-orders for Series 2/Wisdom, with shipping anticipated in August 2016 to pre-order customers, specialty and online toy retailers.  Individual figures are available at MSRP $10.99 and complete sets of seven figures (packaged in a Lunchbox Carry Case, including a drawstring carry bag, shields, interchangeable accessories, Elements of Power chart, and trading cards, as well as an IAmElemental workbook and an adjustable bracelet which enable the action figures’ shields to be worn as charms), are available at MSRP $69.99.  The 6.5″ Wisdom Core Power Figure, a fusion of all Elements in the series, will launch next, followed by Series 3/Justice in 2017.

IAmElemental is a privately held, women-owned, New York City-based company, founded in 2013.  The company conducted a Kickstarter campaign in 2014 which was fully funded in two days, drawing backers from all 50 states and six continents.