Based on the IDW Publishing graphic novelcreated by Beau Smith, Wynonna Earp is a fast-paced, 13-hour episodic supernatural thriller that follows Wyatt Earp’s descendent as she battles demons and other demonic beings. Wynonna is a witty and wild modern day gunslinger, using her unique abilities and a dysfunctional posse of allies to bring the paranormal to justice. 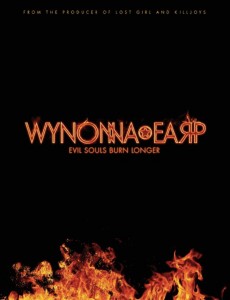 “We are thrilled to be working with Dynamic Television on Wynonna Earp.  Dynamic’s first class sales team combined with an exciting and original series concept, give us tremendous confidence that series will be seen by prime time audiences around the world,” said David Ozer, President, IDW Entertainment.

“We fell in love with Wynonna when we read the script,” said Daniel March, Managing Partner, Dynamic Television.  “We are always attracted to new series and original characters that deliver action, suspense, shock and flair.  Wynonna is unlike any other character on television and we can’t wait to bring her to our broadcast partners.”