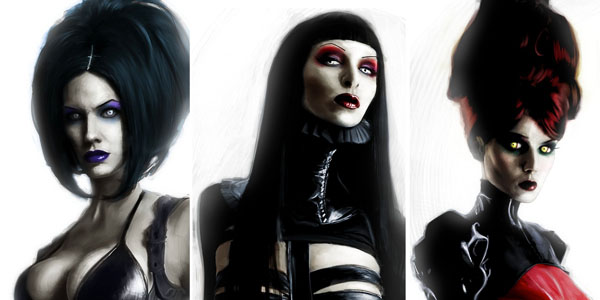 One of the hardest things to do in the comic book industry is to make something new and gather someone’s interest. The Memory Collectors is a book that does just that!

This book is written and drawn by Menton 3. His art work is a very dark and gritty and looks to have a water color finish much like Mark Teixeira’s work from Marvel. The script is lengthy but tells the story that will snag your interest. 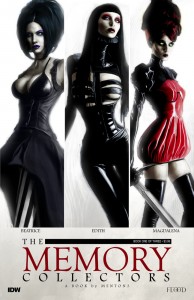 There are three sisters Beatrice, Edith, and Magdalena that appear as if they escaped a Las Vegas S&M convention. They have been training to fight a mysterious evil for centuries all over the world. They have no superpowers per say, besides long life, but they are trained to see the true aura of someone and tell if people are evil or good. Edith and Magdalena are yet to make a solo kill, with Beatrice is there as their mentor.

The writers explain the some of trio’s back story; how they found out of this evil and how they were chosen to fight it. After Edith makes her first kill Magdalena is not far behind and makes her first solo kill also. It was after the kills that the sisters felt a disturbance and realized that there is something coming for them. They say they do not hunt these things to save humanity; they hunt them because they like to kill them.

This book is defiantly a step out of the normal for most but the gritty art keeps you intrigued. I mean come on who wouldn’t want to see three hot dominatrices slicing and dicing evil? This is book 1 of 4 and at $3.99 cover price from IDW it is worth it.