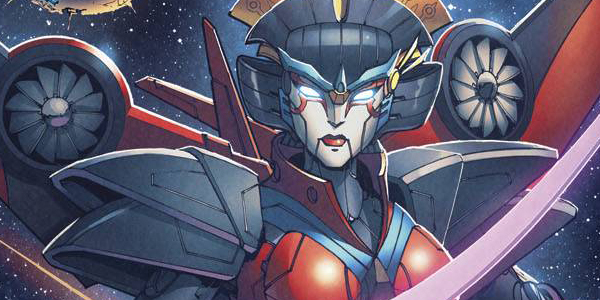 In the aftermath of the Dark Cybertron story a powerful new chapter in the Transformers saga begins from IDW.

From IDW Transformers: Windblade is written by Mairghread Scott and Illustrated by Sarah Stone. Scotts story is pretty easy to follow. Since I did not read Dark Cybertron I thought I would be lost but the words were laid out in a way that was very understandable. Stones art work was very Anime inspired and it worked throughout the whole book.

Optimus Prime continues to lead the Autobots along side his old nemesis Megatron (I know I had to take a double look at that one) who has joined the ranks of the Autobots to win back Cybertron. The last remaining city on Cybertron is Metroplex, however, he is severely damaged from battle and is stuck in his city mode and cannot communicate. Or can he? There is a fairly young Autobot named Windblade who is able to speak with Metroplex and he is sharing valuable information with the her. Can she get the info to Optimus before Lord Starscream fulfills his secret mission?  Who is Windblade and  where did she come from? What does her secret mean to the future of the Transformers? So many questions but the answer is in the book so I will not spoil any goodies for you.

I enjoyed the art in this book, as it was very appealing to the eye and did not disappoint! This gets a 7.5/10 on the JQ scale. The TPB collects issues 1-4 of Transformers: Windblade and will be available at your local comic shops come this Wednesday Oct 1, 2014.