ON OUR FRONT COVER: Nick Spencer and Steve Lieber, the team behind The Superior Foes of Spider-Man, reteam for a new crime caper from Image Comics, The Fix. 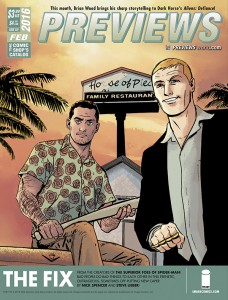 ON OUR BACK COVER: Harley Quinn is kidnapped in Frank Tieri, Jimmy Palmiotti, and Mauricet’s Harley Quinn and the Gang of Harleys from DC Entertainment. 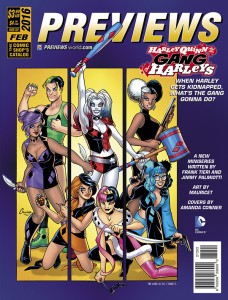 Kids Comics Month — To help the next generation of comic book readers find reading material that will engage and excite them, PREVIEWS spotlights some of the best kid-friendly, all-ages comics, graphic novels, and books available in the market today.

On the Flipside — Tying in with Kids Comics Month, PREVIEWS talks to IDW Publishing’s Bobby Curnow and Sarah Gaydos about their publishing strategy for all-ages and kid friendly comics in an exclusive interview.

Gems of the Month — February’s PREVIEWS Gems of the Month include: Fabio Moon and Gabriel B´ adapt a Neil Gaiman short story for Dark Horse Comics’ new graphic novel, How to Talk to Girls at Parties; Batman: The Animated Series‘ Paul Dini recounts an assault on himself and how Batman helped his recovery in the autobiographical graphic novel Dark Night: A True Batman Story from DC Entertainment; a classic toy line from the late 1970s returns in IDW Publishing’s Micronauts; Northlanders‘ Brian Wood returns to the world of the Vikings in his historical mystery Black Road from Image Comics; and the Galactic Resistance’s top pilot travels the galaxy in Marvel Comics’s Star Wars: Poe Dameron, an ongoing prequel to Star Wars: The Force Awakens, from Charles Soule and Phil Noto.

catBUZZ — PREVIEWS takes a look at some of the blockbuster books and products coming out in the months ahead. This April, National Book Award winner Ta-Nahesi Coates (Between Me and the World) teams with Brian Stelfreeze on Marvel Comics’ new Black Panther series. Plus, Dynamite Entertainment brings back some classic Silver Age heroes in Gold Key: Alliance; the History Channel’s blockbuster series, Vikings, comes to comics in a new series from Titan Comics; Brian Pulido returns to his most famous creation in Coffin Comics’ Lady Death: Chaos Rules!; Steve Jackson Games partners with Marvel Comics for Munchkin: Marvel Universe Edition; DC Collectibles celebrates a classic Silver Age story with the Batman: Rainbow Action Figure 6-Pack; and many more products you have to look forward to in the spring.

PREVIEWS Exclusive Apparel — Each month PREVIEWS offers comic book fans and pop culture aficionados a selection of t-shirts and other apparel that can only be found in your local comic shop! The Master of the Mystic Arts explores the magical realms for the Dr. Strange: “Spells Strange” Black T-Shirt, Marvel’s super-powered private investigator hangs her sign on the Jessica Jones: “Glass Entry” Black T-Shirt, and Deadpool attacks on the Deadpool: “2 Swords Deadpool” White T-Shirt. These and many other shirts can only be found through PREVIEWS.

Indie Edge — PREVIEWS talks to Ian McGinty, the artist of BOOM! Studios’ Bravest Warriors and Welcome to Showside, about his comics work, the books he’s reading, and his career in this month’s Indie Edge feature.

All this awaits you in the February edition of PREVIEWS, which goes on sale at your local comic shop or specialty store on Wednesday, January 27th with the cover price of just $3.99.