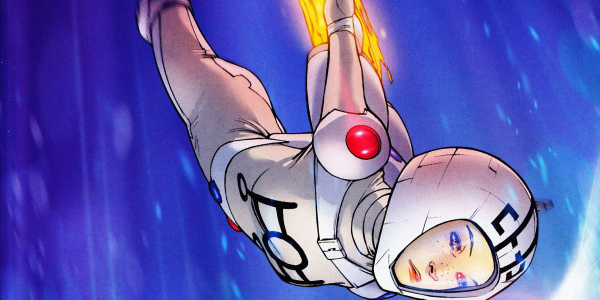 Will Dayoung be victorious on the vicious streets of old school New York City?

There is a new series “blasting off” from Image Comics called Rocket Girl.Written by Brandon Montclare and drawn by Amy Reeder, this story takes place in two time frames. It begins in 2013 New York City that has a Back to the Future resembling a future Hill Valley and moves back in time to a 1986 New York. The story follows the adventures of a New York City Police Officer Dayoung Johansson, but here is the twist she is only 15 years old. The writing by Montclare is unique as in this is not your normal time travel and I was really impressed by Reeder’s art on how she told the story the futuristic people will remind you of Batman Beyond’s Neo-Gotham and the 1986 people have all the fun of the late `80’s.

It turns out that the future of NYC is molded by an invention that changes New York into a new clean Mecca of technology and etiquette. In this future there is also a Teen Police Force and Dayoung volunteers to go back in time to stop this impending doom. The creators take you back to 1986 where you see an experiment about to take place and the disturbance pops our hero into that time frame.

One of Dayoung’s first encounters is a shooting at a local arcade. After she flies in, she mingles with the local police of the era and proceeds to try to solve the situation.  Will she be victorious on the vicious streets of old school New York? This story was fun to read, so pick up the book to find out in your local comic shops now!