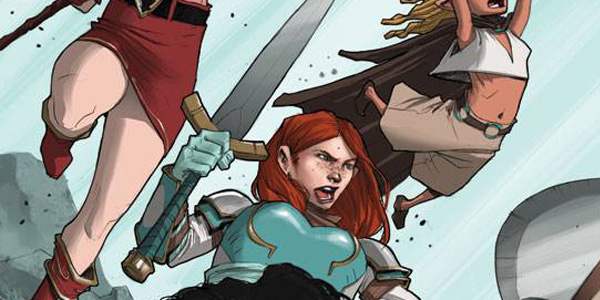 Issue one of Rat Queens was so enjoyable that I had to take issue 2 for a spin! Rat Queens is a story of a team of four booze drinking, foul mouth, butt kicking beings from other relms.

The story is brought to you by Kurtis Wiebe and drawn Superbly by Roc Upchurch.

When we last left the Queens they were about to be attack by a troll, and after some bickering they form a plan to attack. The leader Hannah jumps the gun and is grabbed and has her arm broken and she is tossed away. The other 3 Queens follow the plan and with team work take out the target. After they heal Hannah they start back to the village where another attack from a black suited assassin is taking place. The Queens walk in to assist one of the other teams who took major losses in the battle. They then go to a pub where they discuss who is behind the assassinations of the teams.

Again with the vulgar language this book is totally PG-13 and although it is over the top it makes you laugh as you read. I comment Wiebe on his style of writing and look forward to Issue 3. But again Upchurch’s art style makes this book the gem it really is! If you’re not reading the Rat Queens you are missing out on a fun book!