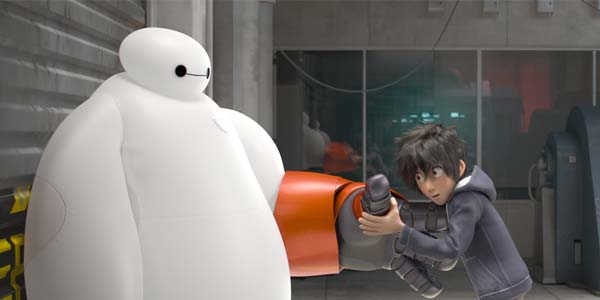 The Disney/ Marvel mashup gets three images to show us what we’ll see this November.

I’m kind of curious about Big Hero 6.  Not interested enough to go pick up the comic book on which it will be based… but this is one of those rare times when the business behind a movie seems more novel than the source material itself.

This movie will be the first to cross-pollenate between Disney and Marvel, which is now wholly under its umbrella.  I’d guess this flick will NOT tie into Marvel Studios, what with it being animated and released under the Disney proper banner… but who knows?

Either way, it’s kind of neat for some reason, to see Disney and Marvel team up in a way that’s more overt than the subtle “copyright Disney” fine print on everything Marvel Studios puts out, and I like the idea of Disney pursuing this with the stranger, less “canon” avenues of the Marvel Universe.  I’d die to see something like Runaways get this animated treatment.

As for the pics themselves, they seem okay– a cutesy creature/ robot and a kid who looks like the kid from any number of modern animated features.  Like I said, I’m walking into this blind, so maybe the designs means something to the readers of the comic, but a quick Google search yielded what looked more like Americanized anime than the style of these movie images, so I think it’s a safe bet the film will be a little liberal with its source material.

Big Hero 6 is scheduled to hit theaters this November, so I’d imagine we’ll see a lot of presence for it– and an explanation on how or if it fits into the greater Marvel cinematic wheelhouse– at San Diego Comic Con.  In the meantime, enjoy three pretty pictures: