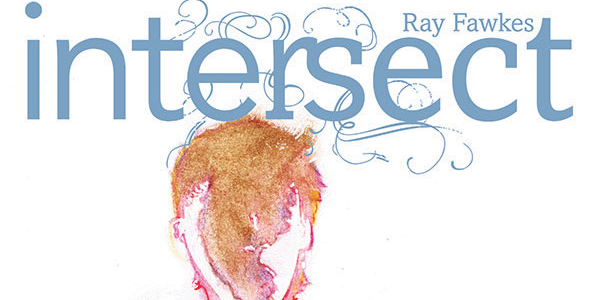 I’m not ashamed to admit that Intersect goes above, not to mention through, my head.

Welly well well well, looks like it’s time to review Intersect. I’ve been dreading this since page one since I 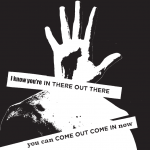 find myself faced with the same problem that I always do when things decide to go this far off the reservation. Abstraction without mercy. See, I’m a person who connects to narratives, and Intersect does have a narrative, but it remains to be seen if it’s going to be shared with the audience. I only have some idea of what’s going on, but I’ll try to lay it out.

A…”girl?” named Eli and “her?” “friend?” named Kid are being chased by a…thing. They are in a “city?” and things seem to be changing, where even the people are becoming formless. I’m not sure what exactly the characters are running from, but I get the sense that it isn’t death really, but something worse (to them, anyway). All I can seem to do is speculate rather than review…but here it goes.

The atmosphere is intense. Everything is distorted and strange and terrifying, with only Eli and Kid remaining a tangible shape within the chaos of the background. There is an unknown blob of evil (named Lucky?) that chases them from place to place. Buildings are still y’know…there, so there are rooms and floors and furniture 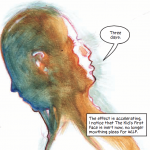 and boundaries like that; but the rules (for the most part) are sort of unknown. We know they are in danger from something and that weapons are still usable but we don’t know why. We know that everything is changing, but we don’t know how. Finally, we know that Eli used to be a guy and Kid had two faces, but we don’t know when. I looked at this multiple times. This is volume 1 isn’t it? I’m completely lost. They’re running, they’re in trouble, but I don’t know enough about their world to provide a reasonable reaction *to* that danger.

The art is incredibly abstract and ridiculously difficult to follow a majority of the time. The panel layout is both intriguing and effective at conveying the “story?”. Even though I couldn’t tell you what exactly the story was about, I have to admit that the scenes transition smoothly. The story is dominated by this ethereal sense, and the aesthetic fits that intention. Everything does look otherworldly, but also painfully and unnecessarily confusing. This art could be used to make this story stylish and interesting, but in 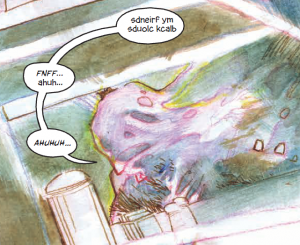 it’s current form it’s just being used to filter an incredibly hard to decipher tale through abstract visuals that border on being sort of a mess; but I get the impression that I’m not supposed to understand it. I think Intersect #1 might just showing off or strutting it’s stuff by using the watercolor style for a comic book. Intersect REALLY REALLY wants you to think it’s raw and intelligent. It wants it so bad, that it’s struggle becomes obvious, and that’s the problem. I’m all for to atmosphere of terror that Ray Fawkes is trying to convey, but I don’t get that from Intersect. It’s as scary to me as stains on a coffee table.

Intersect has the potential to tell the story it wants to tell, with the art it wants to use. The only thing holding it back is it’s own insistence on being ambiguous. Maybe #2 will shed some light on the idea behind the story as it’s been revealed in interviews and descriptions (but not in the actual story), and I honestly hope so.  There could be something here because it’s all very unique, but in it’s current form, it just seems like an amorphous blob that’s trying to confuse you so it can seem intelligent.