Inversion: A Singularity From Which No Fun Can Escape 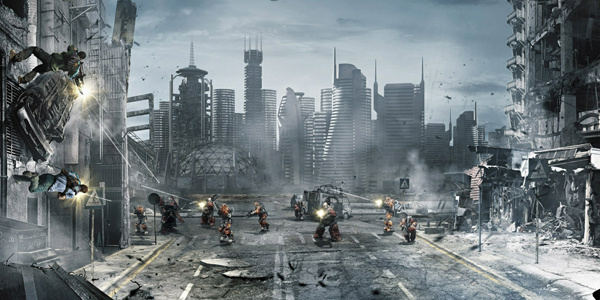 I’m a sucker for a good third-person action game; especially when they bring something new to the table.  Developed by Saber Interactive, Inversion was built around a central mechanic which allows the player to manipulate the force of gravity — which seemed like a winning formula seeing as TimeShift (also developed by Saber Interactive) benefitted from smart writing and a well-implemented control over time itself.  Imagine my disappointment to find that Inversion not only suffers from generic gameplay and clichéd plot devices, it’s a pretty lousy game to boot.

While not completely devoid of redeeming qualities, things get off to a rocky start right out of the gate. During the intro cutscene, we are introduced to our protagonist Davis Russel and his partner Leo Delgado – two police officers on their way to visit Russel’s young daughter on her birthday.  The buddy-cop conversation players are then subjected to combines stiff, wooden voice acting that wouldn’t sound out of place in a Star Wars prequel with the characters’ oddly emotionless faces reminiscent of the marionettes from Thunderbirds.  Rather suddenly, just as I was about to pass out from sheer boredom, the Earth is invaded by a race of giant humanoid meatheads who, for some reason, want everyone dead.  Bulging with muscles and dressed like extras from Road Warrior, these “Lutadores” (as they are eventually referred to without any explanation of how that name came about) immediately begin capturing and enslaving humans including, you guessed it, Davis’ daughter. 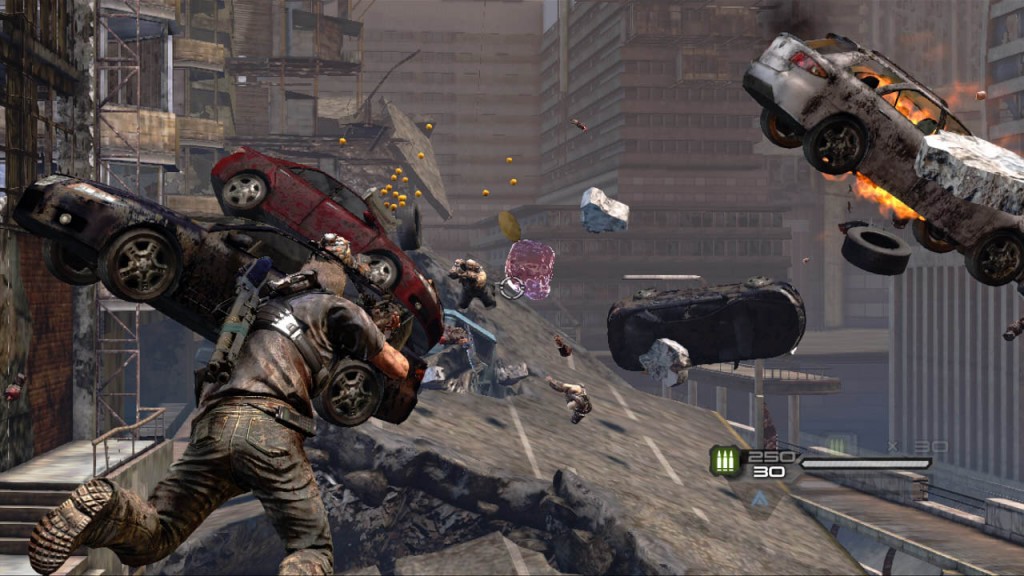 (it looks way cooler than it is)

Not long afterward, Russel and Delgado are captured as well and need to fight their way out of a Lutadore internment camp, stealing super-powered, gravity-manipulating backpacks from the enemy in the process.  Now you would think this is where the game would really come into its own but you’d be gravely mistaken.  Unfortunately the entire gravity shifting mechanic is implemented so poorly that it really ends up being an afterthought.  Your powers have essentially two modes, represented on your hi-tech backpack as “blue” and “red”.  One creates a zero-gravity field that can hover objects and enemies alike (floating objects can also be hurled forward in this mode) while the other can increase the gravitational pull on objects, causing them to plummet to the earth.

Using these powers on anything that’s not immediately in front of you is a chore to say the least thanks to a completely inaccurate aiming system.  More often than not you’ll simply find your rifle to be a far more efficient way of dispatching enemies.  Outside of combat there are also seldom opportunities to make use of these abilities save for the occasional “use your zero-g field to move this rubble out of the way in order to proceed.”  Every once in a while, you’ll also stumble upon these weird energy portals that literally turn the world on its side or even upside-down, but you’ll find that taking cover behind objects and shooting foes on the ceiling is pretty much the same as it was on the ground.  Even the free-floating sections are a bit of a bore once you realize that you can’t physically propel yourself around the environments as you could in say, Dead Space 2.  Instead, you are required to jump from object to object across the zero-g environment to reach your destination.   Because all the gravity effects (which should be the cornerstone of the title) were executed so unimaginatively, the game really fails to distinguish itself from any other shooter on the market. 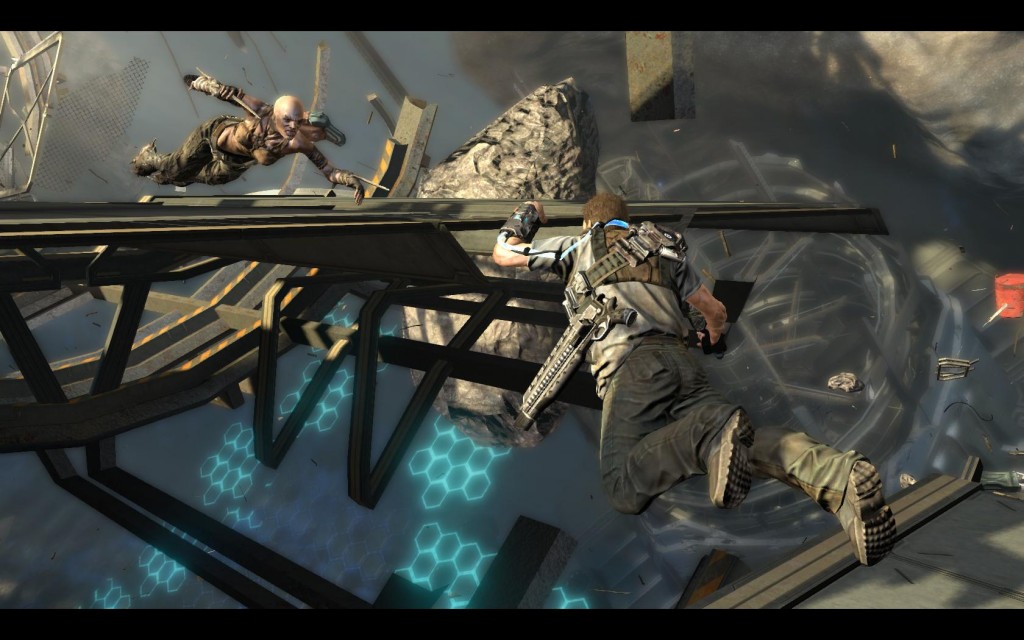 The multiplayer doesn’t fare much better, offering players a rather uninspired list of online modes that will surely find itself without an active community within weeks.  It’s really a shame because the campaign does have some truly fun moments, but they’re constantly choked by the game’s own restraints.  The first time I hit a boss encounter, it was a pretty exciting experience marred only by a less-than-stellar control scheme – the third time I faced the identical boss in the same fashion later in the game just smacks of laziness on the developer’s part.  The boss fights, by the way, offer the only real challenge to this title, which is rather unbalanced.  You will breeze through for a good hour then hit a boss that really puts your skills (and luck) to the test.  Playing on “hard” mode there were a few fights that I had to retry several times.  Luckily the checkpoint I had to restart at in nearly every scenario was situated right before a cutscene that I had to skip through just to get back to where I was.

Meandering through the single-player portion will take about 12 hours, most of which is spent taking cover and shooting enemies on wrecked city streets and crumbled buildings while listening to your character break down and sob about his missing daughter on a regular basis.  There’s a twist ending, but not particularly good one…or even one that makes sense.  There are enough plot holes here to make Mass Effect 3 look coherent.  In any case, unless you’re a glutton for punishment I would probably steer clear of Inversion, especially at its current $60 price tag.  As a budget title though (and you know it’ll get there sooner rather than later) you could do worse.  Published by Namco/Bandai Games, it’s currently available for Xbox 360, Playstation 3, and (as of June 26th) PC. 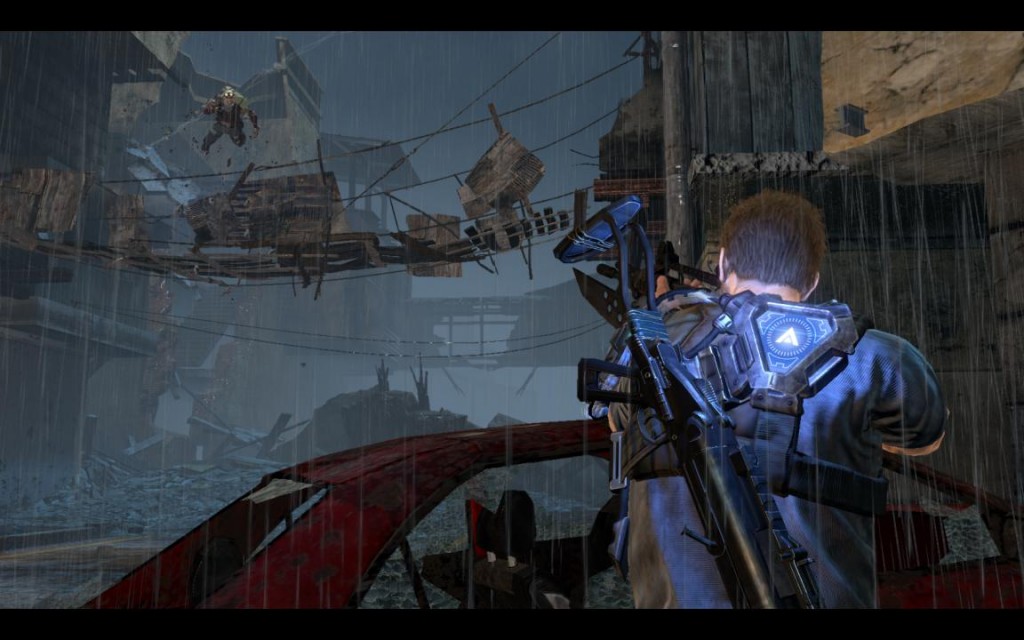