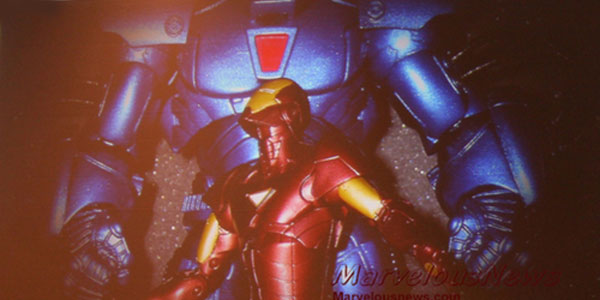 The pre-Toy Fair radio silence is starting to break, and now we know the first half of Hasbro’s Iron-Man 3 Legends series.

Big Bad Toy Store updated their site with pre-order listings for Iron-Man 3, and the much talked-about Legends series, scheduled to include a Build-A-Figure comic-style Iron Monger, has definitely proven to be one of the more eagerly anticipated movie toys this year.

We had been told aside from Iron Monger, the line would be mostly repaints/ remods of previous figures, and the first three characters support this.  We’re getting:

Which is a decent assortment, I think.

It will be nice to have another horned Iron-Man, as we haven’t seen one in Legends scale since the first Toy Biz series.  I’d assume he’ll share a body with the Maria Hill two-pack figure, but this seems like a golden opportunity for Hasbro to replace the flat yellow of that figure with a nice gold finish here.

Heroic Age may end up being the most original figure in the lineup, as I can’t think of any figures that could be modded or kitbashed into.  I’m intrigued to see how they execute this look.

Iron Patriot could be either comic or movie style… but likely either one would be a straight repaint.  The Legends Extremis would be the perfect base for Norman and the comic style armor, while the I-M 2 Legends War Machine could easily get spruced up for the Patriot armor Rhodey will wear in the third movie.

These figures will comprise half of Iron Monger, with three more figures including the remaining parts.  I’m sure we’ll see both waves at Toy Fair next month, although it’s looking like Series One may be part of the Iron Man 3 launch assortment, scheduled to hit stores on February 11th.  If that’s the case, these guys could literally show up any day now.