IRON-MAN THREE Is A Perfect Ending… And Beginning 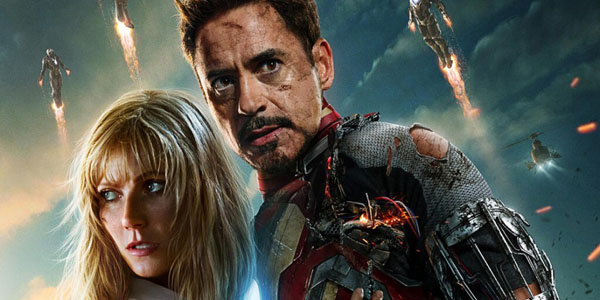 Smart, funny, surprising and almost impossibly hip for a blockbuster, Iron-Man Three kicks off Marvel’s “Phase Two” with a blast.

When you think about it, Iron-Man Three kind of had the odds stacked against it.  Here is a movie that has to follow up both ends of the spectrum– a lackluster second solo movie, and the spectacular Avengers, one of the most successful blockbusters of all time.  But the powers that be at Marvel had a secret weapon with new writer/ director Shane Black, and he delivered not only the far and away best Iron-Man film, but the best written Marvel movie we’ve seen so far.

Iron-Man Three picks up after the events of The Avengers, with Tony Stark struggling from some severe PTSD, which has made him stop sleeping and suffer panic attacks in public.  Thoroughly shaken, the formerly carefree playboy doesn’t know how to handle this new reality he’s been exposed to, one of of gods and aliens and monsters.  It provides a lot of meat for Robert Downey Jr.’s Tony this time out, and he plays the hell out of Stark’s existential struggle.  I love Downey, but his smug, cool guy routine had become rote, as he coasted through Iron-Man 2 and the likes of the Sherlock Holmes movies… but here he is back on point, reminding us that there is more to him (and Tony) than easy and hollow charisma.

As the movie progresses, and the very real threat of Ben Kingsley’s Mandarin casts a shadow of terror over the nation, Tony’s internal struggles expand outward, and after committing to the decidedly bad idea to call out the terrorist on live TV (providing his home address as well), Stark finds himself on his own, with no lab and no functional suit of armor.  It’s a riff on the back-to-basics, stripped down hero story, as Stark must rely solely on his smarts and ingenuity to uncover the truth behind Mandarin’s attacks on America, and how the shadowy AIM (yes, Advanced Idea Mechanics, making their big screen debut!) figures into the threats.

Downey is clearly front and center as Tony, but he’s not the only one on top of their game.  Sir Ben Kingsley turns in an astonishingly great turn as The Mandarin, oozing pure black hearted menace with his military garb, vaguely Asian robes and an accent of no discernible nation of origin.  His ongoing terrorist assaults on US soil serve as the backbone for the danger Tony and his allies are facing, and Mandarin’s arc in the movie serves as one of the best-handled surprise twists I have ever seen play out on screen.  Black and co-writer Drew Pearce take a huge risk by re-spinning who and what The Mandarin is, and while the twist is sure to anger some comic book devotees, it was handled so perfectly that I literally stood up and cheered as the reveal played out.  I won’t say anything more for fear of spoiling it, but it’s cool and smart and remarkably topical, and I cannot wait to write more on this movie’s awesomely subversive politics.

The rest of the cast is equally top notch, especially Gwenyth Paltrow as Pepper, who sells the frustration, fear and loneliness that comes with being with Tony, especially in his current obsessive state.  Paltrow has a few things to do in this movie, and even when it seems as though she’s fallen into a standard damsel in distress routine, the sharp script is quick to turn the situation on its ear and defy expectations. The same can’t really be said for Guy Pearce’s Aldrich Killian, in this universe the founder of AIM, whose pathetic, geeky past has hardened him in to the first villain who feels like a true match for Tony.  Pearce is fine and Killian is adequately sinister but he’s crafted as a much more straightforward bad guy than some of the other characters. Jon Favreau’s Happy Hogan and Don Cheadle’s James Rhodes both make the most of relatively limited screen time, but both are woven well into the story, and their smaller parts still feel completely whole.

Even better than this stellar cast, though, is Shane Black.  The Lethal Weapon creator, coming off the best work of his career with Kiss Kiss Bang Bang, has crafted a movie that miraculously fits the larger Marvel Universe, as well as his own filmography. The story he and Pearce have crafted is smart and funny and cool, but the best thing it does is stay thoroughly rooted in the characters, a group of people that Black seems to completely understand on a deep and profound level. Every major action sequence, while expertly filmed, also offers insight and enhances the growth of Tony Stark.  Tony’s assault on the Mandarin’s compound, using an arsenal of weapons he built from toys and scraps at the hardware store, is as thrilling in its action as in the catharsis it brings the troubled hero.  The trailers have been playing up the plane crash/ freefall sequence, but witnessing the entire moment play out, with Tony desperately trying to figure out how to save 13 people when his suit can only support four, is the stuff classic action sequences are made of. It’s one of the greats– there’s a sense of urgency and danger here, but it’s not a dour drag.  Tony’s not going to concede a grim, Batman-style tough call on who to rescue– he will find a way to make the impossible become possible… that’s who he is, and Black completely gets that.

Likewise the big final battle, which features Tony calling in the cavalry in the form of the other 30-some-odd suits he’s developed. What could have been overkill (or a blatant toy commercial) actually plays to Tony’s current mental status– these suits are all special designs for distinct purposes… Tony clearly made them in an attempt to have a suit to cope with whatever disaster followed the events in The Avengers.  That’s cool!  As is that all these extra suits, and the AIM death squad they are battling, pepper the background of the sequence, maintaining the real focus squarely on Stark and Rhodey, Pepper and Killian.  It’s a thrill of a fight.

There are a huge number of moments where this movie defies expectations, pulling some clever and surprising left hand turns that work to remarkable effect. It makes for a thoroughly entertaining cinematic experience, one that revitalizes Tony Stark as a character while also providing a fantastic sense of closure by the time the awesomely retro end credits roll.  This feels like an ending for the Tony Stark we have been following for the past three (and a half) movies, but it won’t be the last we see of him.  As the credits promise, Tony Stark will return… and he will be in a new, more mature chapter of his life.  After seeing Iron-Man Three, I am more stoked than ever to see what happens next!