Is The GI Joe Club Trying To Fix OktoberGate? 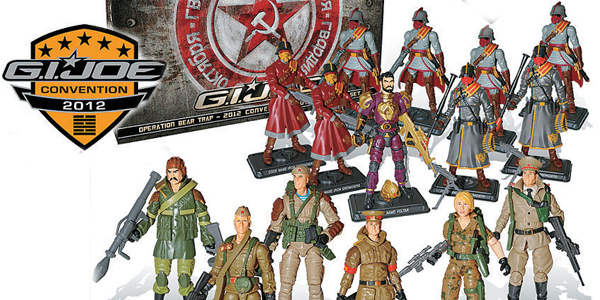 There’s a chance the GI Joe Club may come through for the fans spurned by the insanely fast sell-out of the Oktober Guard Joe Con set.

When the non-attendee edition of the Joe Con exclusive Oktober Guard: Operation Bear Trap set went live on the Joe Club site, it sold out in just over an hour, leaving lots of collectors scrambling with how they would be able to secure a set without breaking the bank on crazy-priced plane tickets to New Orleans or patronizing probably even crazier-priced EBay scalpers.

I didn’t get my order in fast enough to get a set, but I chose to not write about it here. Yes, the production runs for this set were wildly under-estimated, resulting in a lot of collectors in the same boat. But the Joe Club is essentially a fan club, NOT a major toy company, so I try to give them the benefit of the doubt when I can, and it really seems like the short run of the OG set was a genuine miscalculation and not based on some mad desire to strongarm fans into flying out the New Orleans.

I’m glad I gave them some credit, because now it looks like the Joe Club may break their previous precedent, as they are researching if there’s enough interest in the Oktober Guard set to warrant a second production run. This is by no means a guarantee that they’ll come through, but the fact that they are even considering it proves they’re really trying to take care of their fans and Club members.  It makes a lot of sense, and if the lightning-quick sellout of the first batch is an indication, they’re essentially sitting on a goldmine here– why should third party scalpers make all the profits by selling these sets at a premium, when the Club can make more and keep that money for themselves?

As I said, there’s no guarantee or promise of any kind, but if you would be interested in the chance to purchase an Oktober Guard box set, you can complete this form and e-mail it to Joe Club’s special email address: oktoberguard@gijoecon.com

If they get a strong enough response, they may put the long-sold out set back into production.

Just a few notes, though–

I’m sharing the form and the email address here, but PLEASE, only send it in if you are SERIOUS that you’d commit to buy the set. If the response is huge and then everyone balks, the Club will be out lots of money, and we will be assured they’ll probably never go out on a limb for collectors again.

And two, if you’re one of the people complaining about the possibility of more sets being made– screw you. We all understand Convention exclusives are incentive pieces, but that’s why they’re selling at a high premium. Sure, you can sit pretty and feel proud you’re one of the lucky few who got your order placed in that first hour, that’s cool. But there is absolutely no reason to be upset that the playing field may be evened out and other collectors will now have the chance to get the toys they want as well.  Competition can be one of the uglier sides of this hobby, but hostility over an in-demand exclusive being made available to the countless fans who missed it goes way over the line.

Click Here to download the form— then send it to oktoberguard@gijoecon.com by July to make your voice heard.

Just as a CHECK and we are NOT saying we are going to do this…..

We are curious as to how many of you did not get the Oktober Guard set and would still like to order one (boxed only)?  We don’t know if there is enough demand left to meet the MOQ (minimum order quantity) with the manufacturer.

In addition, we have NOT cleared any potential additional manufacturing quantities with Hasbro.  So that we have an idea and can better serve you with future sets, if you would be interested in a set (IF it were possible to make more and it was approved), please fill out the attached spreadsheet with ALL of the information requested by Monday, July 2nd and return it to this email’s return address (oktoberguard@gijoecon.com).  We will only analyze spreadsheets that are returned and will not count/look at information in the email as this is a huge task.

We will analyze the data and see how much demand is still pending and we will let you know soon after July second if there is enough demand to warrant a second run. There should be no variation in the two runs.

I don’t want anyone to get false hopes but we don’t know what the potential demand is unless we ask.  So, at this point assume that we will not be making any additional sets.

Thanks for helping us gauge your desires!